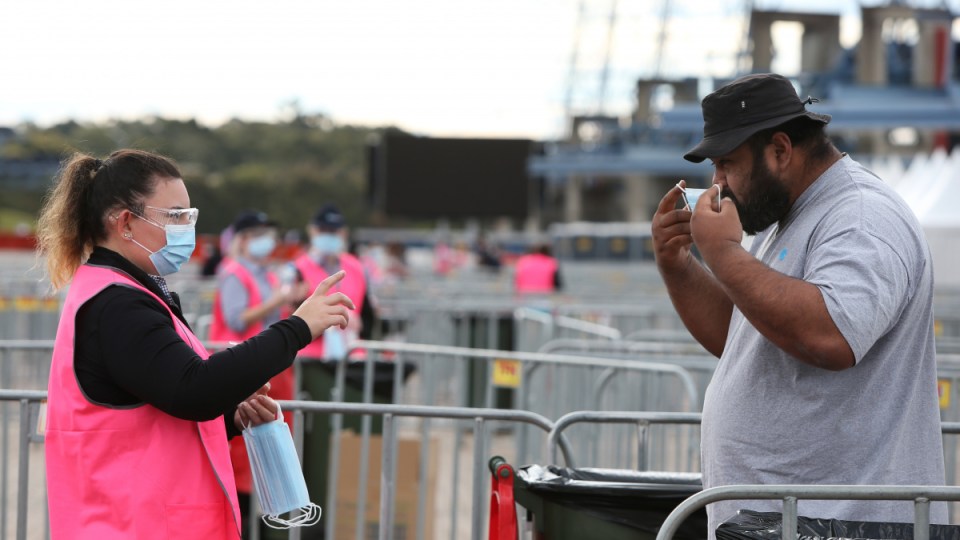 A man dons a mask as he arrives for a COVID vaccine at a Sydney hub. Photo: Getty

NSW has posted another grim COVID record, with 1290 more local cases on Monday.

It is the highest number of daily cases in the state’s coronavirus outbreak yet, and comes after 1218 infections were reported on Sunday.

The state’s death toll has also risen, with four more fatalities taking it to 93. They were:

The man who died in Dubbo is reported to have been Indigenous. He was the first COVID fatality in regional NSW.

“It is a very sad day today for Dubbo, and all of the region,” Western NSW local health district chief Scott McLachlan told a local press conference on Monday.

Australia’s toll from throughout the pandemic has now topped 1000, reaching 1003 with the latest NSW fatalities.

“Nearly-two thirds of our adult population has had one dose and 36 per cent have had two doses,” she said.

“While it is important for us to reduce case numbers, we know the greatest way to do that is getting vaccinated. Vaccination is the key in terms of our freedom and reducing the spread of the virus.”

More than 80 per cent of NSW’s coronavirus cases are still coming from Sydney’s south and south-west. The suburbs of particular concern include: Guildford, Maryland, Auburn, Necker, Punchbowl and surrounds.

But chief health officer Kerry Chant said there was increasing “spillover” into other areas, usually through workers from the hardest hit areas. They include Ryde and some inner-west suburbs such as Marrickville.

“It is important that all workplaces consider their COVID-safe plans,” Dr Chant said.

“Make sure you are not sharing the tea room, you are wearing masks, you have four-metre density and make sure you do not attend when you have symptoms.”

NSW now has 840 COVID patients in hospital. They include 137 people in intensive care, 48 on them on ventilators.

Victoria has another 73 coronavirus cases, with 52 linked to known outbreaks.

Monday’s update means there are 805 active virus cases in the state, according to the Department of Health.

More than 26,700 vaccine doses were administered at state-run hubs and 41,395 test results were received on Sunday.

Health Minister Martin Foley said “at least 24” of the new cases were in isolation while infectious.

There are 49 COVID patients in Victorian hospitals, including 15 in intensive care.

The latest figures came after Victorian Premier Daniel Andrews confirmed on Sunday that the state’s sixth lockdown would not lift on Thursday as originally planned.

The ACT, which is also in lockdown, had 12 more local COVID Infections on Monday, down from 13 on Sunday. Six are linked to exposure sites, four are under investigation and the others were mystery cases.

There are 12 virus patients in hospital in the ACT, three of them in intensive care.

Chief Minister Andrew Barr said his cabinet would consider virus restrictions this week. But he said authorities remained concerned about unlinked cases and the number of people in the community while infectious.

“The coming months, the spring, will be difficult. We’ve got a very delicate balancing act,” he said.

“Careful and modest steps will be required while more people are vaccinated.”

Across the Tasman, New Zealand reported another 53 local COVID cases on Monday, down from a spike of 83 on Sunday. Prime Minister Jacinda Ardern is due to make an announcement later on Monday about the future of virus rules in NZ.

‘We must act’, emotional Biden pleads – as toll rises in Texas shooting
Expect a longer lockdown but some more freedom
Today's Stories