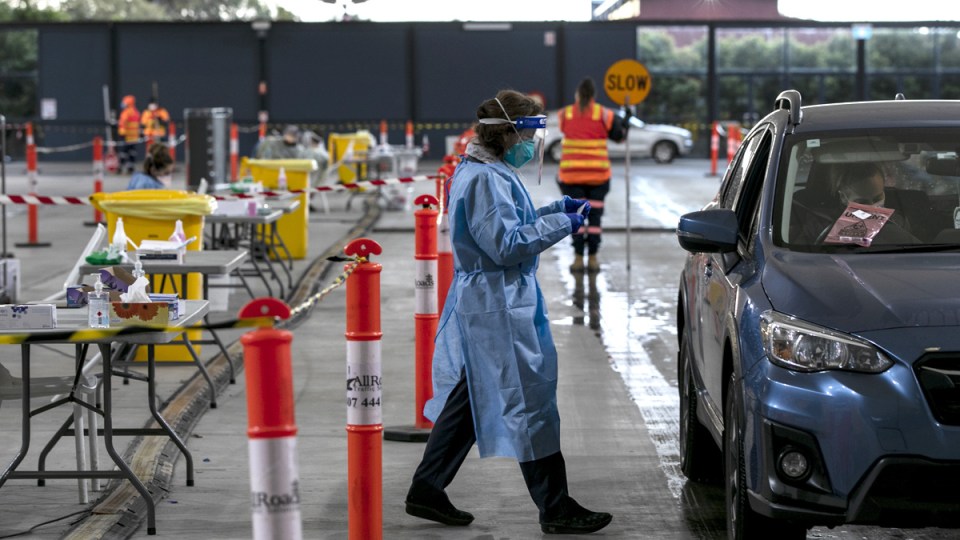 The new infection is a worker from a COVID testing site, who did two shifts while infectious.

Victoria has a new mystery coronavirus case, just hours after emerging from its fifth COVID lockdown.

The infection was confirmed by Victorian health authorities on Wednesday morning.

The infected man is not a close contact of any of the state’s existing COVID cases.

He works in traffic control at the drive-through virus testing clinic at Moonee Valley racecourse, in Melbourne’s inner-north-west, and did two shifts while infectious. It is unclear how he picked up the virus.

The site has closed and staff have been sent home to isolate.

The case was confirmed after Victoria’s midnight cut-off for its daily tally, and is on top of the eight local infections confirmed earlier on Wednesday.

All of those were linked to local outbreaks and were in quarantine while infectious.

“It’s obviously a concern, but we are in early minutes, if not hours, of understanding exactly what’s happened where it might have been acquired,” chief health officer Brett Sutton said.

“[He’s] at a testing site – obviously that’s a point we’ll look at in terms of how he might have acquired it.”

There are now 198 infections in Victoria linked to the outbreak of the highly infectious Delta variant, which originated from NSW.

Statewide, virus restrictions were eased at midnight on Tuesday after a 12-day shutdown to keep the Delta COVID-19 variant at bay.

Victorians are now able to travel any distance from home, and leave for any reason. But masks remain compulsory indoors and outdoors.

A ban on home gatherings remains, although people are able to gather outside in groups of 10.

Restaurants and cafes can reopen for seated service, with a maximum cap of 100 per venue and density quotas of one person every four square metres. Smaller venues are limited to 25 people.

Retail, live music venues and gyms have also thrown open their doors again – with strict density limits – and workers can return to offices at 25 per cent capacity. Students in all year levels are back at school.

Despite the end of lockdown, Premier Daniel Andrews warned the fight against the highly infectious Delta variant was “not over”.

“We’ve got to be vigilant against this virus, the Delta strain, in the days and weeks and months ahead until we get as many people vaccinated as we possibly can,” he said on Tuesday.

“We’re on the cusp of containing our second Delta outbreak … but we can’t call it mission accomplished yet,” chief health officer Brett Sutton added.