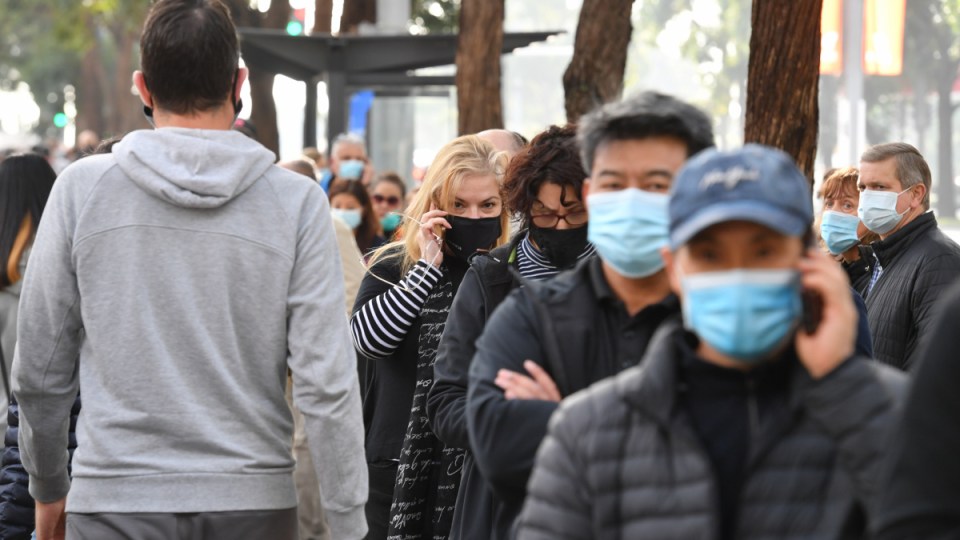 Sydneysiders queue for vaccines. Millions of people across NSW are in the fourth week of a COVID lockdown. Photo: AAP

Lockdown-inducing COVID-19 outbreaks in NSW, Victoria and South Australia have prompted Australians to reassess their willingness to get the jab, according to a national poll.

The Melbourne Institute’s fortnightly report card into vaccine hesitancy shows it has fallen, from 33 per cent at the end of May to 21.5 per cent last Friday.

The sharp drop in hesitancy in the past eight weeks is across all states and age groups.

With greater Sydney and its surroundings enduring a fourth week in lockdown – and the state government widely expected to extend that by a month on Wednesday – vaccine hesitancy rates in NSW are at 14.6 per cent.

That has more than halved since late May and the authors of the report cite a sole reason.

“The outbreaks are clearly changing some people’s minds about getting vaccinated, especially in NSW,” said the report, published on Wednesday by the leading economic and social policy research institution.

Some 11.8 per cent of the 1200 Australian adults surveyed were still refusing to get a coronavirus jab, while 9.7 per cent remained unsure – down from 15 per cent at the end of May.

The report said the latter group was most likely to be affected by policy, with the nation’s expert panel on immunisation last week revising its advice to recommend Sydneysiders “strongly consider” receiving the AstraZeneca shot in response to the worsening outbreak.

Despite the latest outbreaks reinforcing the benefits of getting the jab, high rates of vaccine hesitancy persist among those aged 18 to 44 (28.8 per cent) and Queenslanders (30.9 per cent).

“Policies to reduce vaccine hesitancy need to be carefully targeted at populations most vulnerable and most likely to transmit the virus, as well as geographic areas with the lowest vaccination rates,” the University of Melbourne-based institute said.

Penny Wong promised a new approach to rising China. Did she deliver?
‘No idea what’s in it’: Government shoots down ‘vaccine stockpile’ claims
Today's Stories