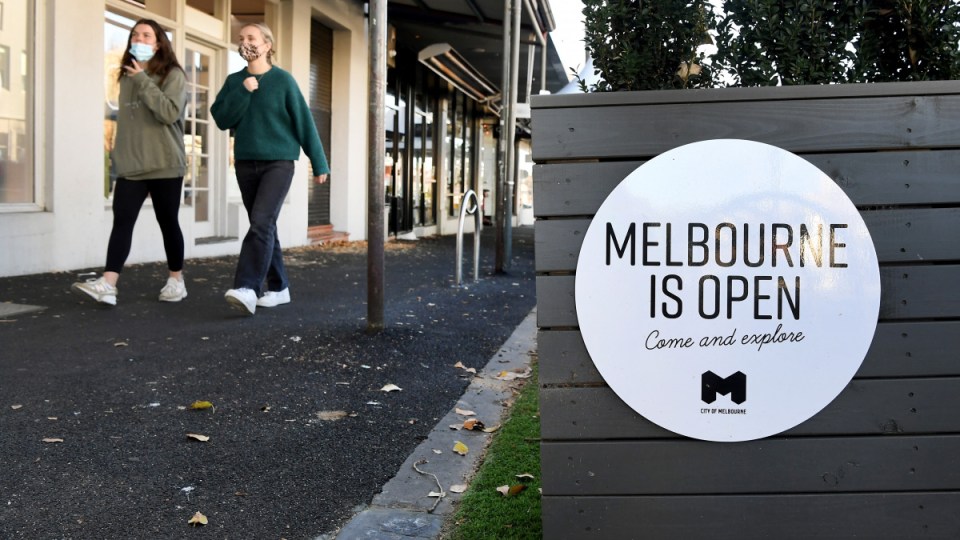 Melbourne's lockdown is poised to lift, although strict virus rules will remain for some time. Photo: Getty

Victoria’s lockdown is expected to end as planned within hours, with the state posting 10 more local COVID cases on Tuesday.

All of the new infections were linked to existing outbreaks, and all had been in quarantine throughout their infectious period.

Tuesday’s update came from more than 24,000 virus tests across Victoria in the previous 24 hours.

It is the third day in a row that all new cases have been in isolation while infectious, and comes after 11 cases each on Sunday and Monday.

Also on Tuesday, Victorian government ministers and health officials were meeting to finalise details for the end of the state’s lockdown.

An announcement from Premier Daniel Andrews is expected from 10.45am (AEST).

Students are reportedly set to return to school and hospitality and shops to reopen. Other restrictions will also remain in what has been dubbed “lockdown light” to prevent another outbreak of the highly infectious Delta COVID-19 variant.

Melbourne Lord Mayor Sally Capp, who is calling for the reinstatement of JobKeeper, has urged the state government to reveal its lockdown call as soon as possible for the sake of businesses.

“We need to know when are we reopening here in Victoria and what will be the restrictions,” she told Nine’s Today on Tuesday morning.

When Victoria emerged from June’s lockdown, some strict measures remained for a fortnight, including a 25-kilometre travel rule, a ban on visitors at homes and strict density limits for hospitality, shops and offices.

Some businesses, including gyms and nightclubs, weren’t able to reopen.

Mr Andrews has flagged masks will likely remain compulsory in some settings, while Health Minister Martin Foley said on Monday “nothing has yet been finalised”.

He said the state was “on the right track” but authorities wanted to base their decision on the most up-to-date and accurate data.

The statewide lockdown was called on July 15, after it emerged that a NSW removalist crew visited the state while infectious.

It was initially slated to run five days but was extended by a week to 11.59pm on Tuesday, as contact tracers struggled to chase down people before they turned positive.

On Monday, Mr Foley conceded 22 new local cases in the past two days was a significant figure but said officials took comfort from none spending any time in the community.

Ten new cases in Vic, with lockdown set to lift