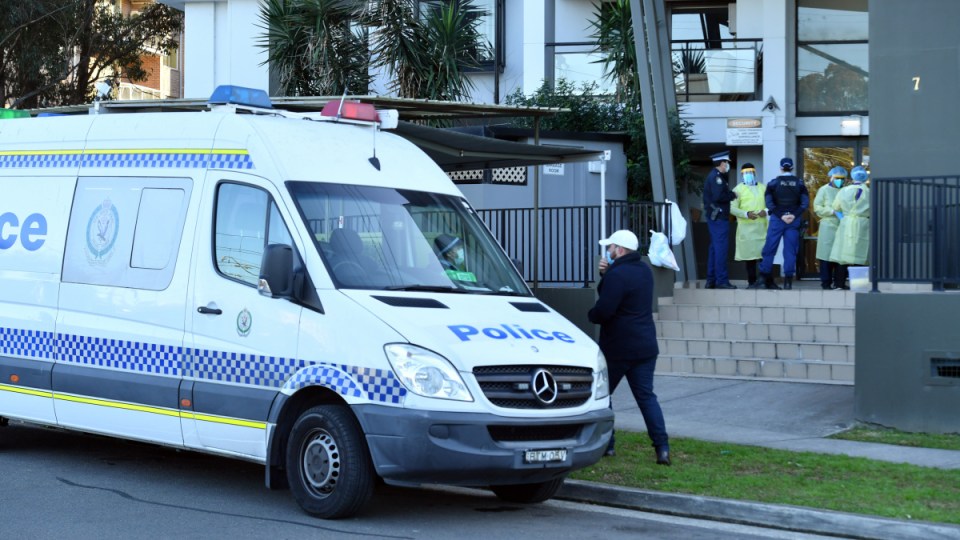 About 100 people living in a five-storey apartment block in Sydney’s west have been locked down with the complex being guarded by NSW police after cases of COVID-19 were diagnosed in multiple residents.

Several officers are guarding the building in Devitt Street, Blacktown, in an area where the virus is rapidly spreading, after police were called by NSW Health on Monday night to provide support.

It’s understood that all residents are being tested and could be locked down for two weeks with essentials such as food and medicine delivered.

One of the residents who has tested negative said the building was surrounded by police, media camera crews and security guards.

“There’s a lot of police outside and we just don’t know what’s going on right now.”

NSW Health has not commented on the latest development but Blacktown is one of the local government areas where non-essential workers cannot leave, even for work.

The department has confirmed two women in their 80s, not a man and a woman as it earlier reported, died on Monday – one at her home in Pendle Hill in Sydney’s west and another at Campbelltown Hospital, taking the death toll from the state’s latest outbreak to 10.

Meanwhile, NSW Health has issued an urgent alert for anyone who visited Campsie Centre Shopping Mall in Sydney’s south-west anytime from July 14-24.

Anyone who was there over the 10-day period is a close contact and must immediately get tested and isolate for 14 days regardless of the result.

NSW had 145 new local cases in the 24 hours to 8pm on Sunday, with south-west Sydney remaining the main area of concern for authorities. It is yet to provide an update for Tuesday.

The state is moving to bolster its vaccination rollout with new walk-in clinics offering the AstraZeneca jab.

Western Sydney Local Health District on Monday announced new pop-up clinics will be set up across the Merrylands and Guildford area for three weeks for AstraZeneca vaccinations.

Anyone over 40 will be able to receive the jab without a GP referral.

Meanwhile, frontline workers for Woolworths, Aldi, Coles and Metcash in Fairfield, Liverpool, Canterbury-Bankstown, Cumberland and Blacktown will from this week have priority access to the Pfizer vaccine.

This includes workers in supermarkets, warehouses and online retail centres. The jab will be available at the Sydney Olympic Park hub.

“This is a significant breakthrough in protecting the health of frontline retail workers, ensuring the community retains access to the essentials of life during the protracted lockdown in Australia’s biggest city,” SDA NSW secretary Bernie Smith said.

Premier Gladys Berejiklian said the government would this week decide on what happens next ahead of the scheduled end of the Sydney lockdown on July 30.

Some restrictions may be tightened while others could be eased where transmission risk is minimal.

The future of homeschooling is yet to be determined but construction, which has been paused for two weeks, will resume in some form from Saturday.

“We might need to go harder in some areas and release some settings in others,” Ms Berejiklian said on Monday.

Overnight NSW Health issued health alerts for more than 20 venues, many in Sydney’s south-west, visited by someone infected with COVID-19.

A week-long lockdown in the NSW regional local government areas of Orange, Cabonne and Blayney is due to expire at 11.59pm on Tuesday.