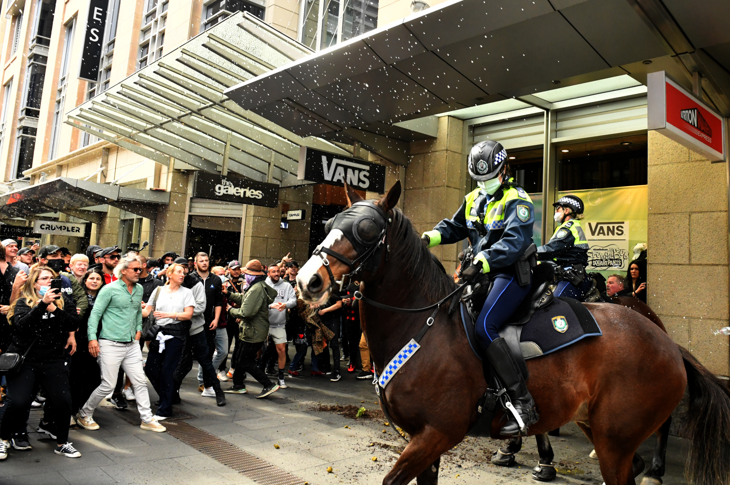 Two men will face court in the wake of an anti-lockdown protest in central Sydney, accused among other offences of striking a police horse.

Fifty-seven people have already been charged and 90 infringement notices issued over Saturday’s protest, while a police strike force has been established to hunt down those who took part.

NSW Police on Sunday morning said officers were assaulted amid the unrest and police horses were struck and pushed.

A 33-year-old Surry Hills man was arrested late on Saturday night, as was a 36-year-old man from Edensor Park in Sydney’s southwest.

Both were charged with committing an act of cruelty upon an animal and failing to comply with public health orders, while the Edensor Park man was also charged with assaulting a police officer.

They will appear in Parramatta Local Court on Sunday.

A special strike force of detectives is analysing footage from social media, CCTV and police-worn body cameras to identify those who defied stay-at-home orders.

“Police will be contacting people … to have to answer for themselves and their behaviour, particularly the ringleaders,” he said.

Premier Gladys Berejiklian said in a statement she was “utterly disgusted” by those who had shown “utter contempt for their fellow citizens”.

“This type of activity during lockdown will not be tolerated and the full force of the law will be brought against anyone who engages in this type of illegal activity,” she said.

The protest occurred as daily case numbers in NSW rose to a new high for the year.

Some 163 cases were diagnosed in the 24 hours to 8pm on Friday, despite the government ratcheting up restrictions in the four weeks since Greater Sydney entered lockdown.

A number of police officers were injured as they were attacked by protesters, who threw plastic bottles and pot plants seized from the roadside.

Despite a heavy presence of mounted and riot officers, protesters broke through a police barrier to continue down George St but were stopped at King St.

In Melbourne, an anti-lockdown protest was also brought to a violent end by police.

Acting Police Commissioner Luke Cornelius said organisers had not been co-operative and refused to consider moving the rally to a later date when it would have been safe.

“As a result, we had to roster hundreds of police to this event because of their selfish actions and blatant disregard of others,” he said.

“This is not where we want to be allocating our valuable resources.”
In addition to penalty notices already issued, Victoria Police will also review evidence captured at the protest to identify as many people involved as possible.

Their investigation will include the alleged assault of a mounted officer hurt by a flying bollard.