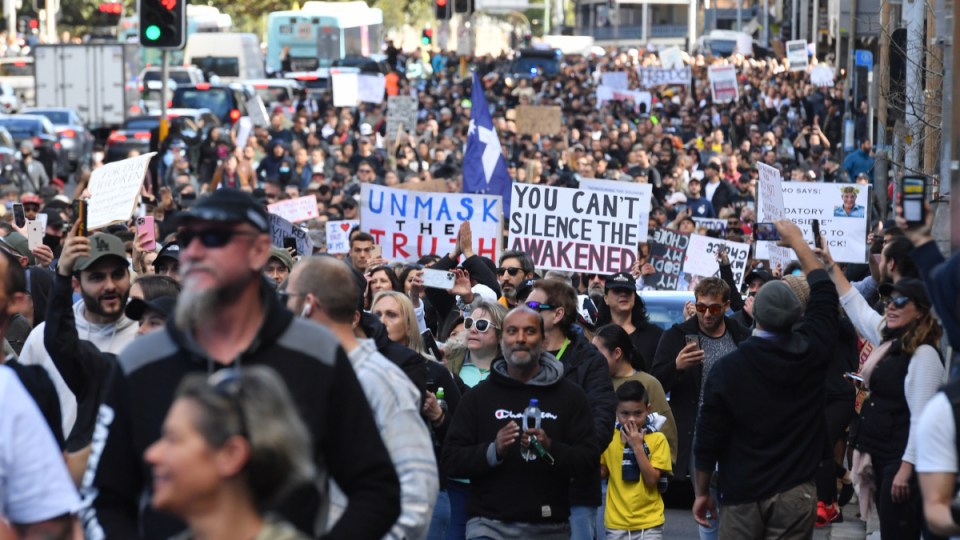 Thousands of angry, unmasked people have rallied against lockdowns in Sydney and Melbourne. Photo: AAP

A special strike force of detectives will analyse footage from social media, CCTV and police-worn body cameras to identify and punish those who defied stay-at-home orders to protest against lockdown in Sydney.

NSW Police Minister David Elliott announced the formation of the 22-strong strike force on Saturday afternoon as he condemned the thousands of “very selfish boofheads” who earlier marched through the central business district.

“Police will be contacting people from tonight to have to answer for themselves and their behaviour, particularly the ringleaders,” he vowed.

Premier Gladys Berejiklian said in a statement that she was “utterly disgusted” by the protesters who had shown “utter contempt for their fellow citizens”.

“This type of activity during lockdown will not be tolerated and the full force of the law will be brought against anyone who engages in this type of illegal activity,” she said.

In Sydney 57 people have already been charged and 90 infringement notices issued. Mr Elliott wants to see thousands of infringements issued.

Mr Elliott said he would be very surprised if the rally did not cause a spike of COVID-19 cases, describing it as the best case study of a super-spreading event he had seen since the start of the pandemic.

The thousands who joined the march between Sydney’s Victoria Park and Town Hall should immediately get tested for COVID-19 for the benefit of their families and friends, Mr Elliott argued.

The protest occurred as daily case numbers rose to a new high for the year.

Some 163 cases were diagnosed in the 24 hours to 8pm on Friday, despite the government ratcheting up restrictions in the four weeks since Greater Sydney entered lockdown.

Greater Sydney has been locked down for the past four weeks, with residents only able to leave home with a reasonable excuse.

“We live in a democracy and normally I am certainly one who supports people’s rights to protest,” Mr Hazzaed said.

“But at the present time we’ve got cases going through the roof and we have people thinking that’s OK to get out there and possibly be close to each other at a demonstration.”

NSW Police Deputy Commissioner Gary Worboys said it was not the time for a protest.

Despite the Sydney rally being denied permission to assemble, he said police wanted to work with the organisers to make sure people were complying with public health orders to stop it becoming a “disastrous” mass-spreading event.

Flares were lit outside Victoria’s Parliament House, where protesters gathered to chant “freedom”, later marching to occupy the Bourke Street Mall at the centre of the CBD