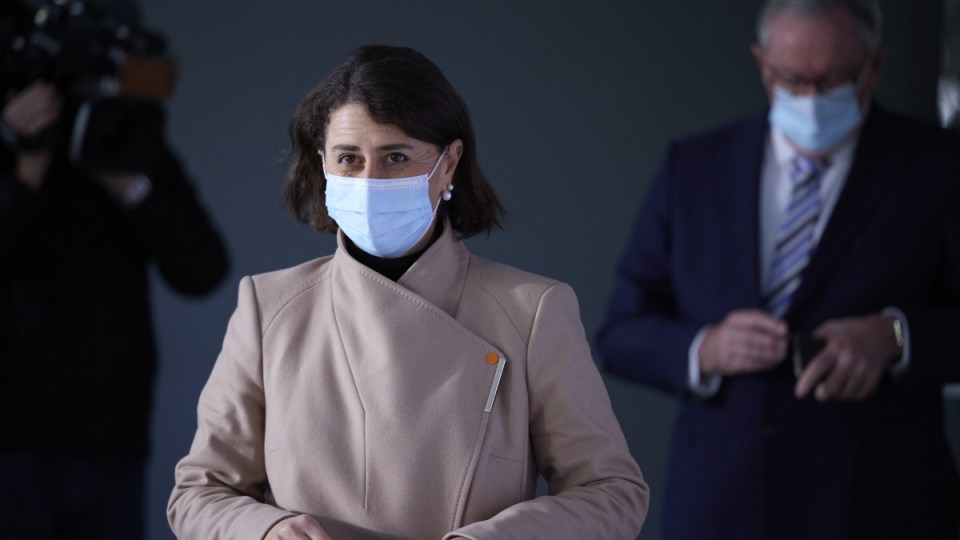 Gladys Berejiklian warned her state early on that case numbers will "bounce around". Photo: Getty

There was also a worrying jump in the number of people who were infectious in the community, with at least 60 out and about while incubating the virus.

The isolation status of a further 13 people is still under investigation.

Wednesday’s number came after 78 cases on Tuesday. But that is the only day in the past six that new NSW infections have not hovered around 100.

“This is a great result and one we need to keep up during the next few weeks to make sure we capture all the cases out in the community,” she said.

“Had we not gone into the lockdown a few weeks ago, the 110 number today would undoubtedly have been thousands and thousands. There is no doubt about that.

“We’ve been extremely successful in limiting the spread to what we have today. But we need to work harder and, of course, all of us need to be on guard.”

Ms Berejiklian said it would still be several days before the full effect of stricter restrictions imposed last week were seen. And it was too early to say if the lockdown of greater Sydney and surrounds could lift.

“Once that data comes through, once the number of cases and how they’re transmitting comes through over the weekend and early next week, we’ll have a better sense of what July 31 looks like,” she said.

“This is a cruel disease, so we’ve had to be extra tough in the way we deal with it.”

From Friday, surveillance testing of people in the Canterbury-Bankstown LGA area will be further boosted. Those who work in healthcare or aged care facilities can only work outside their council area if they have a COVID test every three days.

The NSW outbreak that began with a Bondi limo driver has grown to 1528 cases.

Of Wednesday’s new cases, 54 are linked to a known infection or cluster – 40 are household contacts and 14 are close contacts. The source of infection for 56 remains under investigation.

The update came as residents in the local government areas of Orange, Blayney, and Cabonne areas began a seven-day lockdown. It follows a case reported on Blayney and linked to a COVID-positive delivery driver from greater Sydney.

Ms Berejiklian said the stay-at-home measures were necessary to halt further spread of the virus across Sydney and regional NSW.

“We’ve done really well in stemming the growth of the virus,” she said.

“What we need to do now is quash it, because with the vaccination rates the way they are, we won’t be able to live freely and safely unless we’re able to quash this current outbreak.”

Dr Jeremy McAnulty, from NSW Health said the Blayney infection had been traced back to a delivery driver who did four trips from western Sydney to the country town between July 13-17 while potentially infectious. A close contact at the Nestle Purina factory in the town has since tested positive to the virus.

All of the factory’s staff are in isolation and drivers who who transported goods to and from the factory between July 15-17 are being traced and asked to isolate.

There are also exposure sites in Orange.

The snap lockdown in the Orange, Blayney and Cabonne, announced late on Tuesday, is the first time a stay-at-home order has been imposed in regional NSW.

“It was not an easy decision … but you have to think of the bigger picture … this is the best way that we have got to try and nip things in the bud,” he told ABC TV on Wednesday.

Orange MP Phil Donato said potential exposure contacts were too significant for the town to avoid a lockdown.

“The concerns were that if we didn’t get on top of this quickly, it had the potential to spread,” Mr Donato said.

“It gives us no joy to come out here and tell the community that there is a lockdown.”

NSW coronavirus cases spike back above 100