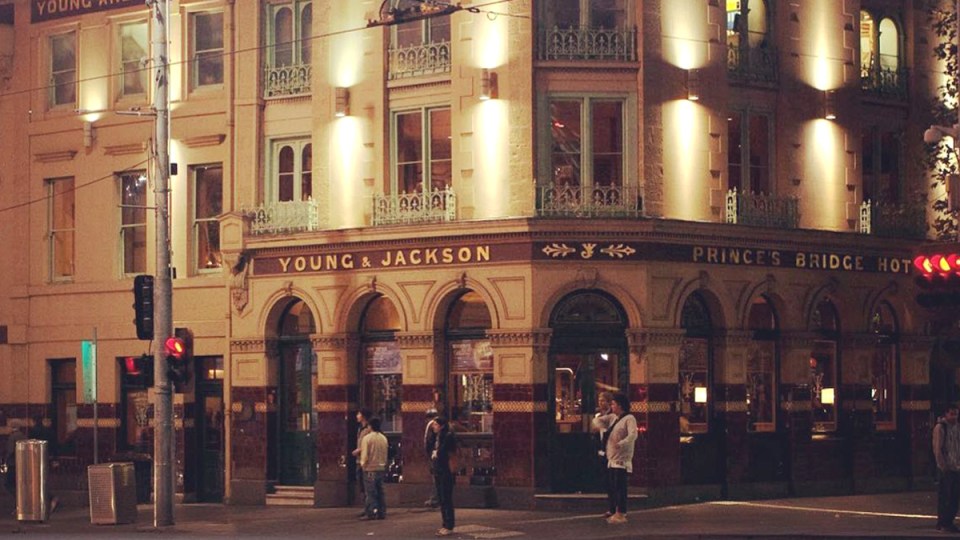 At least three of Victoria's latest COVID cases are linked to the famous Young and Jackson pub in the Melbourne CBD. Photo: Facebook

A favourite Melbourne watering hole appears top be emerging as a virus hotspot after four cases linked to it in the city’s growing outbreak.

Victorian authorities are pleading within anyone who stopped in at Young & Jackson on the afternoon of July 10 to get tested for the virus.

Among the patrons at the pub – a favourite spot for people heading to AFL matches – was a Melbourne man linked to the COVID-hit Ariele Apartments block. He was later confirmed with the virus, along with a friend.

On Friday, Victorian authorities confirmed they believe that two men in their 30s, who do not know each other, also caught COVID at the pub.

They are among six cases confirmed in the state on Friday, on top of four announced late on Thursday. One of the men lives at HMAS Cerberus, on the Mornington Peninsula.

“If you were at Young & Jackson and didn’t use the QR code to sign in, please come forward and get tested,” testing commander Jeroen Weimar said.

“We have four people who are active, three of whom we believe acquired the infection at Young & Jackson. We need to make sure that you are not one of them.”

More than 200 people are already in isolation, having been identified through the pub’s QR check-ins.

“That QR code system is a foundation stone of this really swift, fast contact tracing that we’re now doing here in Victoria. So, please, again, I urge everybody, if you haven’t been doing it enough, do it more,” he said.

“Go back through your memory banks, if you were there in that time window, please come forward now. It’s never too late to come forward.”

Victoria’s other new cases on Friday were a child younger than 10 who is linked to the suspected “stranger-to-stranger” transmission at the MCG, a close contact of a teacher from Barwon Heads and two staff at the school where he works, Bacchus Marsh Grammar.

Late on Friday afternoon, there were reports three more teachers at the school had tested positive. They were yet to be confirmed by Victorian authorities.

More areas of the MCG have been listed as Tier 1 sites, with authorities believing the virus was most likely transmitted when a positive case went to the bar or the toilet.

“It’s during those circulation movements that transmission occurred, and again we’re back in the world of very fleeting transmission,” Mr Weimar said.

“We would encourage anyone who went to that game, if you’ve got any symptoms whatsoever, if you’ve not heard from us we’d like you to get tested out of an abundance of caution.”

He said there were over 3000 primary close contacts of the 36 active cases across Victoria “and those numbers evolve every hour”. There are also more than 126 exposure sites across Victoria.

About 200 Royal Melbourne Hospital staff have been stood down after they were potentially exposed to a patient who is a close contact of a COVID-19 case.

Mr Weimar said the patient had so far tested negative to the virus.

The hospital is still operating on reduced staff but has postponed elective surgery.

Also on Friday, Premier Daniel Andrews confirmed Victorian businesses and workers will be eligible for government money if they lose income during the latest virus lockdown.

The state and federal governments have agreed to share the cost of the scheme, which will provide weekly payments of $375 and $600 for those who have lost work, with no liquid assets test.

Mr Andrews said the payments would apply regardless of the length of the lockdown.

“It is not a cost to the budget, is an investment in everyone doing the right thing and avoiding hardship and an investment in making sure we can contain this, these two outbreaks and get this back under control and be back to as close to normal as we can be in this pre-fully vaccinated period,” he said.

More than six million Victorians are living under stay-at-home orders for the fifth time since the start of the pandemic.

Mr Andrews has warned the lockdown could be extended beyond 11.59pm on Tuesday.

“It may be longer because it depends on what every Victorian does,” he said.

Some 33,129 tests were processed and 17,188 Victorians were vaccinated at the state-run hubs during the same period.

Also on Friday, Queensland authorities declared all of Victoria a COVID hotspot from Saturday.

Anyone who has been to Victoria will be banned from entering Queensland, except for returning residents and people who have a special exemption – and they will have to undergo 14 days of hotel quarantine.