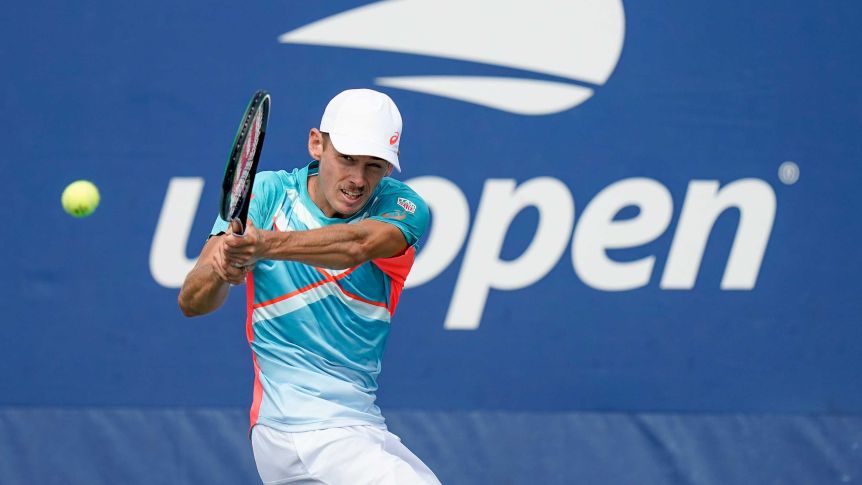 Australia's Alex de Minaur will not play in Tokyo after testing positive to COVID. Photo: AP

A shattered Alex de Minaur is out of the Tokyo Olympics after the Australian tennis star tested positive to COVID-19.

The world No.17 tested positive just 72 hours before leaving Spain to travel to Tokyo, for what would have been his Olympic debut.

It is the Australian team’s first COVID-19 positive test ahead of the Games.

De Minaur, who is otherwise enjoying another breakout season in 2021, was picked for the singles and was also planning to partner with John Peers in the doubles.

“We are very disappointed for Alex. He said he’s shattered not being able to come,” Australian team chef de mission Ian Chesterman said at a Tokyo news conference on Friday morning.

“It’s been a dream since he was a child to represent Australia at the Olympic Games, but he’s sent his very best wishes for the rest of the team.

“No other tennis players have had physical contact with Alex since he left Wimbledon on July 5, where he tested negative.

“All other Australian players have tested negative since. We look forward to welcoming those athletes into our team.”

Chesterman said de Minaur’s positive test showed the measures put in place to protect the Olympic athletes from the virus were working.

“We need to protect this bubble and Alex has been caught up in that system,” he said.

“While we will miss Alex, he understands the reasons why he cannot be with us.”

Missing the Games is another devastating blow for de Minaur, after the 22-year-old was also forced out of his home grand slam in 2020 with a abdominal tear.

He rebounded to make the 2020 US Open quarter-finals before continuing his rise this season with title wins in Turkey and last month on grass at Eastbourne.

De Minaur climbed to a career-high 15th in the rankings following his latest success and will be desperate to return to grand-slam tennis in New York next month.

With Nick Kyrgios opting out of the Olympics, Australia’s best hope of a Games medal in the men’s events in Tokyo will now rest with fellow former US Open quarter-finalist John Millman.

Chesterman is hopeful Peers, who was picked only for the doubles, will still be able to compete in Tokyo.

Swiss great Roger Federer also pulled out of the Games this week, citing a knee setback.

De Minaur out of Olympics after COVID diagnosis