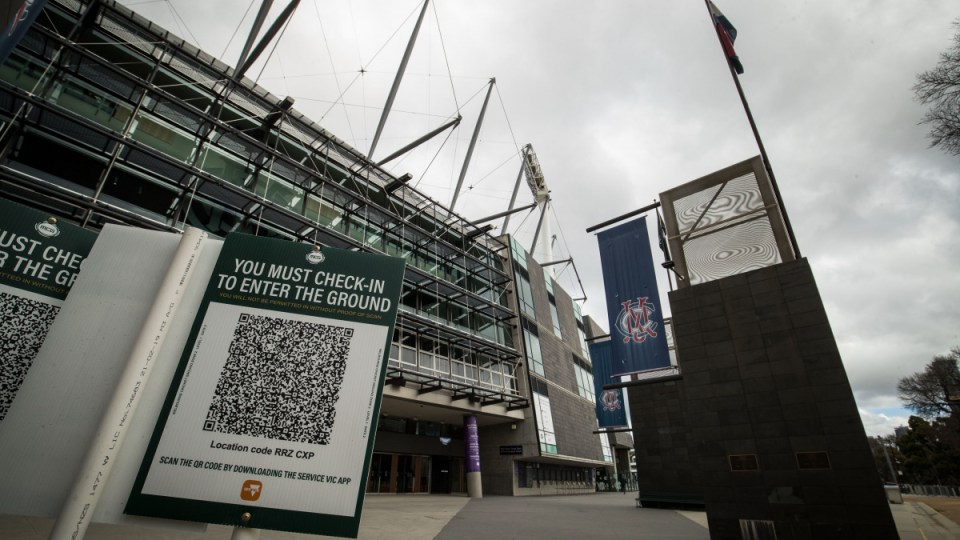 Victorian authorities are particularly alarmed at the spread of the virus in the members' stand at the MCG. Photo: Getty

The entire state of Victoria will go into a five-day lockdown from midnight Thursday, with health officials alarmed over a growing outbreak linked to removalists from Sydney.

Victoria will be in a ‘hard lockdown’ – the state’s fifth lockdown since the pandemic began, and the third of 2021 – until midnight Tuesday. Restrictions include a five kilometre travel limit, mandated face masks outside, and two hours only of outdoor exercise per day.

“You only get one chance to go hard and go fast. If you wait, if you hesitate, if you doubt, then you will always be looking back wishing you had done more earlier,” Mr Andrews said.

“I am not prepared to avoid a five-day lockdown now only to find ourselves in a five-week or a five-month lockdown.”

“I know Victorians will, despite the pain and difficulty of this, know and understand there is no option.”

Earlier in the day, Prime Minister Scott Morrison announced the latest iteration of federal government lockdown assistance, including increased payments that kick in after the first seven days. However, with this lockdown only lasting five days, Victoria may not be eligible for it – so Mr Andrews said he would ask Mr Morrison for a “pro rata” payment option at Friday’s national cabinet.

“I’ve been texting with him all day and I think we can come to an agreement,” he said.

Mr Andrews suggested “a pretty fair thing” could be the federal government providing “five-sevenths of the $600 and the $375… if it is a five-day lockdown instead of a seven-day lockdown.”

Mr Andrews said the lockdown conditions would be “identical to what we did a couple of weeks ago” in the state’s most recent shutdown, including the same ‘essential worker’ list and the same rules.

There will only be five reasons to leave home, under the lockdown rules; to get food and essential supplies, outdoor exercise for a maximum two hours a day and no more than five kilometres from home, for care or caregiving, for work or education, or to get vaccinated at the closest location.

Under current plans, the whole state will be in lockdown until Tuesday, but the Premier said that selected regional areas may be released earlier, if health advice recommends.

In Sydney, Mr Morrison announced more changes to the lockdown support the federal government provides to the states.

Building on the reforms detailed this week for NSW, he said any state going into lockdown in future would have the liquid assets test for the COVID disaster payment waived from the first week, and that payments would now be available from the first week of a lockdown.

They will kick in at $600 from the first week, not the current $500. Business support payments will also be given from the second week.

It comes after Mr Andrews excoriated Mr Morrison for “double standards” earlier in the week, on how the federal government treated Victoria and NSW.

Asked about a possible Victorian lockdown in Sydney earlier, Prime Minister Scott Morrison said he had “no knowledge of whether they’re going to do that” but that he had spoken to Mr Andrews “and we obviously canvassed various options”.

The PM also said any lockdown would get increased support from the federal government, including individual payments from the first week.

Victorian Liberal leader Michael O’Brien was critical of the possibility of another lockdown.

. @michaelobrienmp won’t say yet if he thinks Melbourne should go into lockdown (he wants to see the health advice) but says “This is not what we needed not where we should be, we can’t keep going into lockdown when we get 10 or 12 cases in the community,”@10NewsFirstMelb pic.twitter.com/SbwQSQDyV2

Earlier on Thursday, Victoria’s COVID testing commander Jeroen Weimar wouldn’t confirm whether the state be shut down, but couldn’t rule it out.

“The team is reviewing all the data and all the epidemiology. This situation is moving not so much hour by hour, but half hour by half hour,” he said.

Mask rules had already been tightened to respond to Victoria’s growing outbreak, which was linked to 16 cases by midday Thursday.

Two of those were confirmed early on Thursday, adding to the 10 from Wednesday. They are an adult and a child who contracted the coronavirus after an infected man attended an AFL match at the weekend.

They are thought to be linked to a Maribyrnong man who attended an AFL match between Carlton and Geelong at the MCG last Saturday and sat in the MCC members’ reserve on level two.

Mr Weimar said the duo were not known contacts of the infected man and it appeared to be a case of “stranger-to-stranger transmission”.

“They were sitting in very different parts of the ground. There’s no obvious relationship between them. The interviews and discussions are ongoing,” he said.

Mr Weirmar said Victorian contact-tracers were “moving as quickly as we’ve ever moved” to try to get on top of the latest outbreaks but remained extremely concerned about the MCG spread.

The infected man, aged in his 60s, attended the game with his friend, a teacher from Bacchus Marsh Grammar school who lives in Barwon Heads.

The teacher and two of his family members, a nine-year-old child and a man in his 60s, have also subsequently tested positive for COVID-19.

Both Bacchus Marsh Grammar and Barwon Heads Primary School have been closed and more than 3500 students and staff are self-isolating.

The child who tested positive on Thursday is from St Patrick’s Primary School in Murrumbeena, in Melbourne’s bayside. The school was closed on Thursday.

From midnight on Thursday, South Australians returning home from greater Melbourne, Geelong and Bacchus Marsh must quarantine for 14 days upon arrival.

Returning residents from other parts of Victoria will not have to quarantine but must undergo tests on days one, five and 13.

“We are very concerned of the transmission which occurred at the MCG and so we need to take action to protect South Australia.”

A 70-kilometre border bubble will remain.

Victoria to go into snap five-day lockdown from midnight