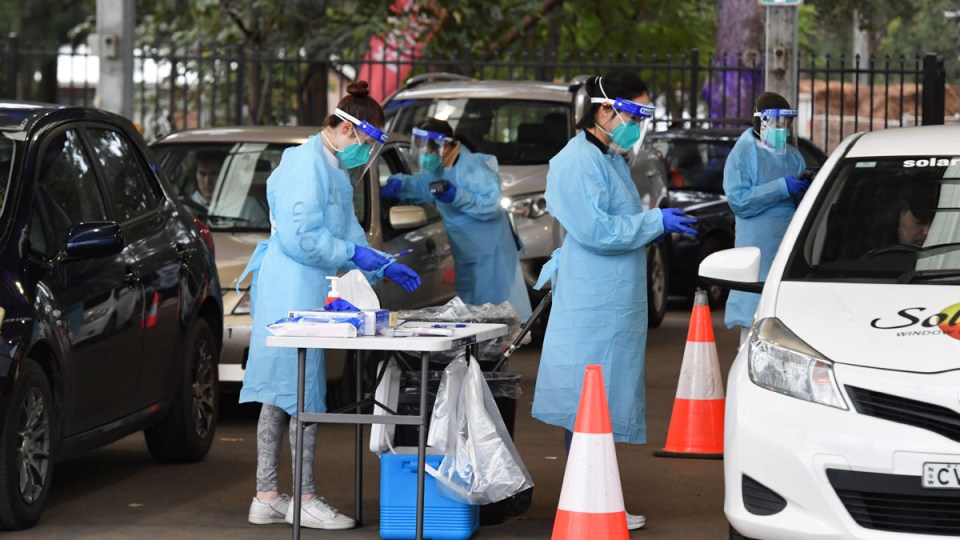 Up to five million residents will spend another two weeks in lockdown, on top of three already completed. Photo: AAP

New South Wales and Victoria are on high alert after more than two dozen new locations were listed as exposure sites, including several major shops and an AFL game that was attended by thousands.

The health alerts came after NSW recorded 97 new locally acquired COVID-19 cases and Victoria revealed eight new cases, with half linked to the Maribyrnong apartment complex which was locked down on Tuesday.

NSW Premier Gladys Berejiklian has warned the two-week extended lockdown announced on Wednesday could last longer if the more than five million people in Greater Sydney and its surroundings did not “stick to the rules”.

Ms Berejiklian said the lockdown could end on July 30 as scheduled if all residents stay at home, but the modelling could not “predict what proportion of our population will stick to the rules”.

“If this doesn’t occur, the lockdown may need to be extended again”, she said.

An Aldi supermarket in Carlton, a KFC restaurant in Fairfield, Costco in Casula, Kmart in Fairfield, Priceline in Wetherill Park, and multiple shops in Westfield Bondi Junction were listed as exposure sites by NSW Health on Wednesday afternoon.

Meanwhile, in Victoria, the Department of Health has revealed an infected person attended the AFL match between Carlton and Geelong on Sunday between 4pm and 8pm.

The person sat in Level 2 of the Melbourne Cricket Club Members’ Reserve, which has been now listed as a Tier 2 exposure site.

The health department is directly phoning everyone who sat in the affected area, and they are being instructed to get tested and isolate until they receive a negative result.

The rest of the MCG has been listed as Tier 3, meaning the thousands of Victorians who attended the game must now monitor for symptoms.

Other locations added to Victoria’s list of exposure sites include the Level 1 car park, SkinKandy and Reject Shop at Highpoint Shopping Centre, as well as Aldi in Maribyrnong and Vanilla Lounge in Oakleigh.

Victorian contact tracers are also working to track the movements of three removalists who travelled from Sydney through Victoria to SA last week.

WA has further tightened exemptions for travellers from NSW, including those granted on compassionate grounds.

“WA residents wanting to enter from NSW are not guaranteed right of entry, and need to demonstrate extenuating circumstances to be granted approval to enter WA,” the latest travel advice published this week said.

“The state emergency coordinator will only approve an individual after consideration of all of the circumstances, including the public health risks.”

NSW is classed by WA as a medium-risk jurisdiction, denying entry to anyone who cannot secure highly restricted exemptions.

Chief Health Officer Andy Robertson said that would remain the case for “at least two months and possibly more”.

He said people wanting to get back from NSW had been given ample time to do so before the restrictions were tightened.

“Obviously if you have very good reason to come back to WA, there might be a very ill family member or a spouse who’s having a baby or whatever the case may be, then obviously there are good circumstances,” he told Perth radio 6PR.

“But this is not the time to go over for a holiday in NSW, or to go over for work, on the off-chance that ‘oh I’m a West Australian and therefore I can get back in’ – you may not be able to.”

Nine active cases are being monitored, including a returned overseas traveller and a maritime worker who are both in a stable condition in hospital.

The stay-at-home provisions for people in Greater Sydney, the Blue Mountains, the Central Coast, Wollongong and Shellharbour were scheduled to end on Friday but will now remain in place until at least midnight on July 30.

Treasurer Josh Frydenberg says Treasury has estimated the NSW lockdown is costing the economy about $700 million a week.

“No one is dismissing the significant impact it will have on confidence and investment in terms of growth, and even potentially labour market outcomes,” the treasurer told the ABC.

But Commonwealth Bank head of Australian economics Gareth Aird puts the damage at $1 billion a week, a reduction of 0.2 per cent from quarterly national growth given Greater Sydney contributes 25 per cent to the economy.

A lockdown of seven weeks would therefore subtract a hefty 1.4 per cent from the September quarter calculation.

“Such an outcome on our figuring would see the national economy contract over the September quarter – by around 0.7 per cent,” Mr Aird said.

New research also shows confidence in NSW could fall further, a warning to retailers, while a separate report found a growing number of Australians believe it will take more than a year for life to return to normality.

The July Westpac-Melbourne Institute consumer sentiment index rose 1.5 per cent as strong gains in Victoria and Western Australia offset a steep 10.2 per cent drop in NSW, including a 13.6 per cent tumble in Sydney.

“It seems likely that at the time of the survey (July 5-9) many respondents may have been expecting a short lockdown per iod,” Mr Evans said.

“That suggests confidence in Sydney and NSW could fall significantly further if lockdown measures are unsuccessful or slow to act in containing the outbreak.”