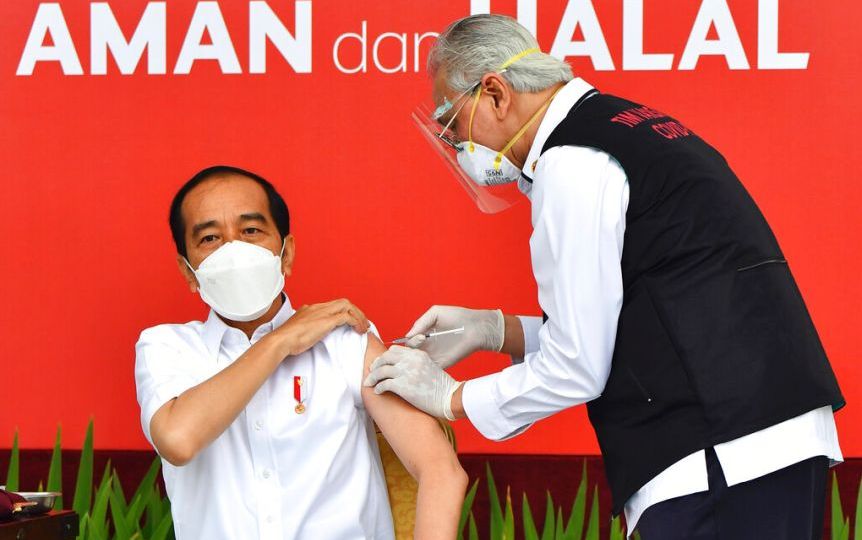 As it battles one of Asia’s worst virus outbreaks, the world’s fourth-most populous nation reported 27,913 new infections on Saturday, the latest of many peaks over the past two weeks.

“In the next 10 days, maybe two weeks, cases can continue to rise,” said Luhut Pandjaitan, the minister overseeing the COVID-19 response.

The hope of heading-off the virus is focused on the islands of Java and Bali, where public officials fear infections now in their incubation period could spawn a tidal wave of fresh cases

“This two weeks is a critical time for us,” Mr Pandjaitan said.

The new curbs, including tighter travel bans, the suspension of restaurant dining and outdoor sports and the closure of non-essential workplaces, run until July 20, but could be extended if infections fail to fall below the official target of 10,000 daily cases.

To keep people in their homes, police have thrown up road blocks and more than 400 checkpoints across Java, the archipelago’s most populous island.

On Bali, already reeling from the destruction of its tourist trade, more than 21,000 officers enforcing curbs and helping in random testing.

Traffic in the capital, Jakarta, in western Java, was much lighter than usual, with trains and buses nearly empty. But some people still flouted the curbs to jog and ride bicycles, even though main roads were blocked.

The highly infectious Delta variant, first identified in India where it caused a spike in infections, is spreading in Indonesia and pushing hospitals across Java to the brink.

In a statement, independent data initiative Lapor-COVID-19 said the medical system had “collapsed” after its analysis found at least 265 deaths outside of hospitals, at a time when people were isolating themselves at home or queued for emergency beds.

An official of the health ministry, Siti Nadia Tarmizi, denied that medical facilities had collapsed, but did not comment on deaths without medical care.

With medical facilities stretched close to capacity, demand for oxygen and drugs has surged as many people isolate themselves at home, driving up prices in pharmacies and online.

The health ministry has capped prices of drugs such as favipiravir, remdesivir and ivermectin, Health Minister Budi Gunadi Sadikin said.

In Jakarta, the government has converted some office halls into makeshift isolation centres, in order to ensure more beds for patients, state news agency Antara said.

In Bali’s Ubud art market, saleswoman Ketut Suwarni lamented the curbs and a delay in reopening for foreign tourists, which had been planned for this month.

“We’ve been closed for 15 months and have been making preparations, but suddenly these restrictions,” she said, adding that she expected sales, which had risen after domestic tourists returned, to drop again. “We’re confused now.”

Authorities are also trying to speed vaccination efforts in the worst-hit areas. The inoculation campaign has covered just 7.7 per cent of the 181.5 million people it targeted this year.

Jakarta launched vaccination this weekend at a football stadium for children aged 12 to 17, aiming to inject more than 20,000.

Indonesia’s tally of infections stands at 2.26 million, with a death toll of more than 60,000.