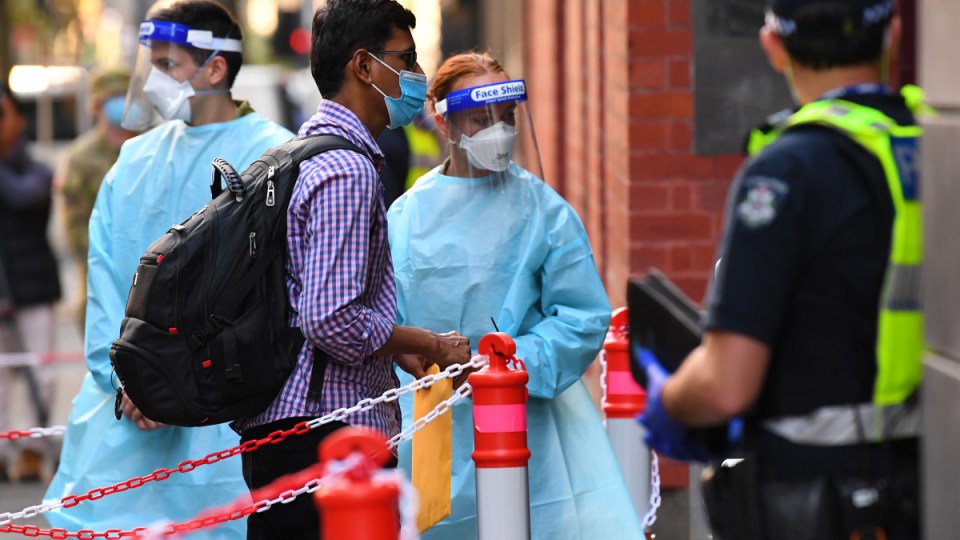 NSW will begin a trial of home quarantine within weeks. Photo: AAP

Victoria had another day without local COVID cases on Friday, along with three more infections in returned travellers in hotel quarantine.

Friday’s tally came as Premier Daniel Andrews headed to a national cabinet meeting to argue, along with other state leaders, for a cut in the number of international arrivals in hotel quarantine until more Australians are vaccinated.

Queensland, Victoria and Western Australia want the returned traveller cap slashed by up to 80 per cent.

The federal government has left the door open to further tightening the international border.

State premiers also want to tighten the eligibility criteria for Australians to travel overseas and return home, concerned too many people are being allowed to come and go as they please.

Mr Andrews said on Thursday that Australia found itself in “no man’s land”, with few people fully vaccinated and the more infectious Delta strain circulating in national outbreaks.

“That’s my position and that’s what I’ll argue at national cabinet.”

Queensland Premier Annastacia Palaszczuk confirmed on Friday she would also push for the reduction, with hotel quarantine in her state already at capacity.

Prime Minister Scott Morrison emerged from quarantine on Friday after his recent trip to Britain. He will chair the virtual meeting, which will also discuss vaccination targets to eliminate lockdowns and border restrictions.

Mr Morrison has spent weeks arguing there is no magic number of vaccinations that will trigger Australia reopening its international borders and ending domestic restrictions.

But with more than 12 million people in lockdown across Australia, he now concedes it is time to set clear expectations around what percentage of the population needs to be vaccinated.

“It’s time to start laying it out for the Australian public,” Mr Morrison told The Australian.

“It is imperative the premiers, chief ministers and I address that question. It comes down to the medical science and what are the magic numbers.”

The perennial topic of Commonwealth-led alternatives to hotel quarantine that can be used in the short-term will also be thrashed out.

Leaving The Lodge on Friday, Mr Morrison said it was time for Australia to switch gears after getting through the past 18 months.

“The country is very much keen for us to chart that way out of where we are,” he said.

Mr Morrison said he was encouraged by Thursday’s record day for vaccinations, with more than 160,000 people receiving their jab nationwide.

He said Australia remained on track to vaccinate all eligible adults by the end of 2021.

Almost 8 per cent of Australian adults are fully vaccinated, but the nation lags far behind all other comparable countries.

The national cabinet meeting will focus on the bungled national rollout and mixed messaging around the AstraZeneca jab.

Mr Morrison triggered a week of competing claims about vaccine advice after highlighting a path for younger people to receive AstraZeneca after consulting with their GP.

After days of confusion and conflicting statements, Australia’s expert immunisation panel reiterated its advice that Pfizer was preferred for all people aged under 60.

Their advice is based on the vanishingly small risk of rare blood clots associated with the AstraZeneca jab.

No local cases in Vic, as premiers lead push to cut international arrivals