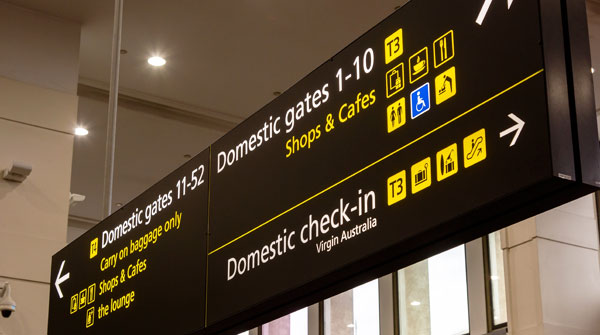 Victorian health authorities say the Omicron variant has been found in wastewater testing from Melbourne Airport.

A Victorian man has tested positive to the coronavirus after returning from a weekend trip to Sydney.

Victorian authorities said the man, aged in his 60s, visited family in a Sydney “green zone” at the weekend.

He flew back to Melbourne on Sunday and began showing respiratory symptoms on Tuesday night. He returned a positive test on Wednesday.

Victorian health authorities were interviewing the man on Thursday.

“We have already established his primary close contacts and they are all undergoing testing,” Health Minister Martin Foley said.

“We are gathering information and we are getting on top of this as quickly as we can and we will, of course, provide further updates as they come to hand.”

Authorities will use genomic testing to determine if the man has the Delta variant of the virus, but are treating him as if he does.

He was one of about 30 guests at a birthday party at his daughter’s house in West Hoxton on Saturday night.

NSW Health officials have dubbed the party a “super-spreader event”. More than 12 people who attended have become infected, including the Melbourne father.

Victoria is using its “traffic light” system of permits to restrict travel to local government areas hit hardest by Sydney’s virus outbreak. Travel is allowed to and from designated green zones.

Mr Foley said travellers who returned to Victoria from greater Sydney would now have to quarantine, following the man’s positive test.

“This is a rapidly developing situation in NSW. We are acting quickly to make sure that Victoria stays secure and safe to the threat posed by this Delta variant of the virus,” he said.

Sydney airport will remain a green zone for passengers in transit.

“Do not fly into a red zone if you are from Victoria and if you are not Victorian and you have been in a red zone that is come into effect, you cannot get a red zone permit to enter Victoria,” Mr Foley said.

“If you try to enter Victoria through the airport you can be denied and you will be sent back.”

Exposure sites are expected to be listed on Thursday, including a dry cleaning shop in Sandringham where the man works. He lives alone in suburban Oakleigh and has one primary close contact, a work colleague.

It is unclear whether he is partially or fully vaccinated, though officials have praised him for immediately coming forward for testing.

“Today’s case is a stark reminder of just how important it is to get tested,” Mr Foley said.

Victoria Police has also stepped up patrols on the state’s border with NSW. Bubble arrangements remain in place for border communities.

Acting Premier James Merlino confirmed the state would proceed with the planned easing of COVID-19 restrictions despite the new Sydney-linked case.

It was in addition to another local infection confirmed on Thursday in a primary close contact of someone linked to the Southbank housing complex where the virus spread last week. They had been in quarantine throughout their infectious period.

Under rule changes from midnight Thursday, Melbourne and regional Victoria will move to almost identical rules, including allowing 15 visitors into homes.

Up to 50 people will be able to gather outdoors statewide, while the cap on funerals and weddings has been boosted to 300 guests.

With a bumper weekend of sports events on the calendar, Victorians can return to Melbourne stadiums with half-capacity crowds up to 25,000 people.

That has opened the door for some 15,000 spectators to attend Saturday’s A-League grand final at AAMI Park and 5000 fans to watch game three of NBL grand final series at John Cain Arena on Friday night.

Theatres can also open at 50 per cent capacity, with up to 1000 people.

From July 1, subject to public health advice, theatres will move to full capacity and indoor and outdoor stadiums can increase to 85 per cent.

The two-week rules block is designed to give Victorians confidence to plan for the upcoming school holidays.

With ongoing outbreaks almost cleared, chief health officer Brett Sutton hoped Victoria would be ready to return to pre-lockdown settings at the end of the next fortnight.

“That’s clearly our aspiration,” he said.

He acknowledged Victoria’s fourth lockdown had left people “angrier, more frustrated and more fatigued” than previous iterations, though flagged they would remain a tool in health official’s arsenal.

“I hope that we’re in a situation where we’ve got such high vaccination coverage that we never have to consider a lockdown,” he said.

“But if that is what’s required, based on what we’re confronted with, I wouldn’t want to set it aside as never being available to us as a tool.”