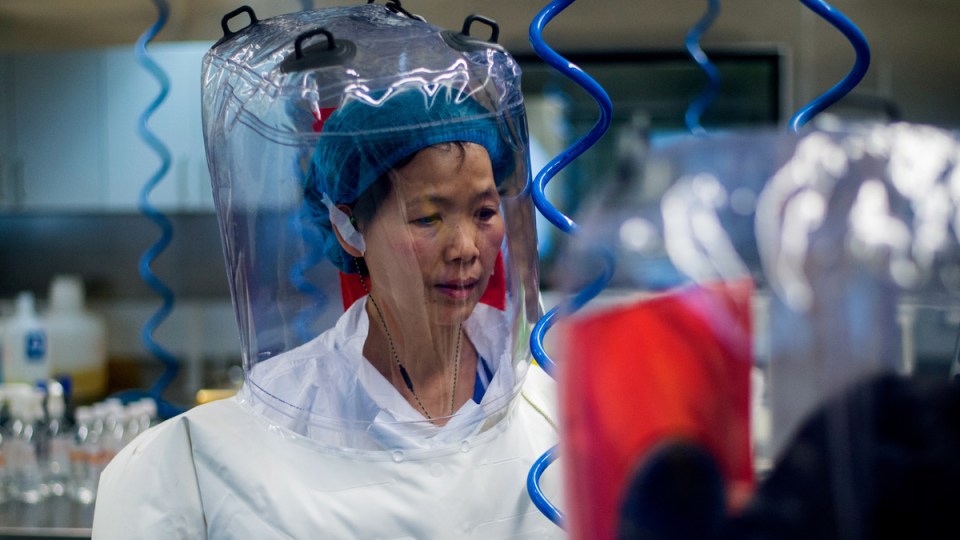 Virologist Shi Zhengli could hold the answer to the origins of the coronavirus, some US officials believe. Photo: Getty

To a growing chorus of US politicians and scientists, Shi Zhengli is the key to whether the world will ever learn if the virus behind the devastating coronavirus pandemic escaped from a lab in China.

To the Chinese government and public, she is a hero of the country’s success in curbing the epidemic and a victim of malicious conspiracy theories.

The top Chinese virologist is once again at the centre of clashing narratives about her research on coronaviruses at a state lab in Wuhan, the city where the pandemic first emerged.

The idea that the virus may have escaped from a lab had long been widely dismissed by scientists as implausible and shunned by others for its connection with former President Donald Trump.

But fresh scrutiny from the Biden administration and calls for greater candour from prominent scientists have brought the theory back to the fore.

Scientists generally agree that there is still no direct evidence to support the lab leak theory.

But more of them now say that the hypothesis was dismissed too hastily, without a thorough investigation, and they point to a range of unsettling questions.

Some scientists say Shi conducted risky experiments with bat coronaviruses in labs that were not safe enough.

Others want clarity on reports, citing US intelligence, suggesting that there were early infections of COVID-19 among several employees of the Wuhan Institute of Virology.

Shi has denied these accusations and now finds herself defending the reputation of her lab and, by extension, that of her country.

Reached on her phone two weeks ago, Shi said at first that she preferred not to speak directly with reporters, citing her institute’s policies. Yet she could barely contain her frustration.

“How on earth can I offer up evidence for something where there is no evidence?” she said, her voice rising in anger during the brief, unscheduled conversation.

“I don’t know how the world has come to this, constantly pouring filth on an innocent scientist,” she wrote in a text message.

In a rare interview over email, she denounced the suspicions as baseless, including the allegations that several of her colleagues may have been ill before the outbreak emerged.

The speculation boils down to one central question: Did Shi’s lab hold any source of the new coronavirus before the pandemic erupted? Shi’s answer is an emphatic no.

But China’s refusal to allow an independent investigation into her lab, or to share data on its research, make it difficult to validate Shi’s claims and has only fuelled nagging suspicions about how the pandemic could have taken hold in the same city that hosts an institute known for its work on bat coronaviruses.

Those in favour of the natural origins hypothesis, though, have pointed to Wuhan’s role as a major transportation hub as well as a recent study that showed that just before the pandemic hit, the city’s markets were selling many animal species capable of harbouring dangerous pathogens that could jump to humans.

The Chinese government has given no appearance of holding Shi under suspicion.

Despite the international scrutiny, she seems to have been able to continue her research and give lectures in China.

“This has nothing to do with fault or guilt,” said David Relman, a microbiologist at Stanford University and co-author of a recent letter in the journal Science, signed by 18 scientists, that called for a transparent investigation into all viable scenarios, including a lab leak.

The letter urged labs and health agencies to open their records to the public.

“It’s just bigger than any one scientist or institute or any one country – anybody anywhere who has data of this sort needs to put it out there,” Relman said.

Many virologists maintain that the coronavirus most likely jumped from an animal to a human in a setting outside a lab.

But without direct proof of a natural spillover, more scientists and politicians have called for a full investigation into the lab leak theory.

Proponents of a lab investigation say that researchers at Shi’s institute could have collected – or contracted – the new coronavirus from the wild, such as in a bat cave.

Or the scientists may have created it, by accident or by design.

Either way, the virus could then have leaked from the laboratory, perhaps by infecting a worker.

China has sought to influence investigations into the virus’ origin, while promoting its own unproven allegations.

Beijing agreed to allow a team of World Health Organisation experts to visit China but limited their access.

When the WHO team said in a report in March that a lab leak was extremely unlikely, its conclusion was seen as hasty.

Even the head of the WHO, Dr Tedros Adhanom Ghebreyesus, said: “I do not believe that this assessment was extensive enough.”

On Sunday, the leaders of the world’s wealthiest large democracies, at the Group of 7 summit, urged China to be part of a new investigation into the origins of the coronavirus. Biden told reporters that he and other leaders had discussed access to labs in China.

“Transparency matters across the board,” Biden said.

‘Scientists have a motherland’

In less polarised times, Shi was a symbol of China’s scientific progress, the “Bat Woman” at the forefront of research into emerging viruses.

She led expeditions into caves to collect samples from bats and guano, to learn how viruses jump from animals to humans.

In 2019, she was among 109 scientists elected to the American Academy of Microbiology for her contributions to the field.

“She’s a stellar scientist – extremely careful, with a rigorous work ethic,” said Dr Robert C. Gallo, director of the Institute of Human Virology at the University of Maryland School of Medicine.

The Wuhan Institute of Virology employs nearly 300 people and is home to one of only two Chinese labs that have been given the highest security designation, Biosafety Level 4.

Shi leads the institute’s work on emerging infectious diseases, and over the years, her group has collected over 10,000 bat samples from around China.

Shi, 57, obtained her PhD from the University of Montpellier in France in 2000 and started studying bats in 2004 after the outbreak of severe acute respiratory syndrome, or SARS, which killed more than 700 people around the world.

In 2011, she made a breakthrough when she found bats in a cave in south-western China that carried coronaviruses that were similar to the virus that causes SARS.

“In all the work we do, if just once you can prevent the outbreak of an illness, then what we’ve done will be very meaningful,” she told CCTV, China’s state broadcaster, in 2017.

But some of her most notable findings have since drawn the heaviest scrutiny. In recent years, Shi began experimenting on bat coronaviruses by genetically modifying them to see how they behave.

In 2017, she and her colleagues at the Wuhan lab published a paper about an experiment in which they created new hybrid bat coronaviruses by mixing and matching parts of several existing ones – including at least one that was nearly transmissible to humans – in order to study their ability to infect and replicate in human cells.

The picture has been complicated by new questions about whether US government funding that went to Shi’s work supported controversial gain-of-function research.

The Wuhan institute received about $US600,000 in grant money from the US government, through an American nonprofit called EcoHealth Alliance.

The National Institutes of Health said it had not approved funding for the nonprofit to conduct gain-of-function research on coronaviruses that would have made them more infectious or lethal.

Shi, in an emailed response to questions, argued that her experiments differed from gain-of-function work because she did not set out to make a virus more dangerous but to understand how it might jump across species.

“My lab has never conducted or co-operated in conducting GOF experiments that enhance the virulence of viruses,” she said.

Concerns have centred not only on what experiments Shi conducted but also on the conditions under which she did them.

Some of Shi’s experiments on bat viruses were done in Biosafety Level 2 labs, where security is lower than in other labs at the institute. That has raised questions about whether a dangerous pathogen could have slipped out.

Ralph Baric, a University of North Carolina expert in coronaviruses who signed the open letter in Science, said that although a natural origin of the virus was likely, he supported a review of what level of biosafety precautions were taken in studying bat coronaviruses at the Wuhan institute.

Shi said that bat viruses in China could be studied in BSL-2 labs because there was no evidence that they directly infected humans, a view supported by some other scientists.

She also rejected recent reports that three researchers from her institute had sought treatment at a hospital in November 2019 for flu-like symptoms, before the first COVID-19 cases were reported.

“The Wuhan Institute of Virology has not come across such cases,” she wrote.

“If possible, can you provide the names of the three to help us check?”

As for samples that the lab held, Shi has maintained that the closest bat virus she had in her lab, which she shared publicly, was only 96 per cent identical to SARS-CoV-2, the virus that causes COVID-19 – a vast difference by genomic standards.

She rejects speculation that her lab had worked on other viruses in secret.

Many scientists and officials say China should share employees’ medical records and the lab’s logs of its experiments and its viral sequence database to evaluate Shi’s claims.

Shi said she and the institute had been open with the WHO and with the global scientific community.

“This is no longer a question of science,” she said on the phone. “It is speculation rooted in utter distrust.”

‘I have nothing to fear’

The pandemic was a moment that Shi and her team had long braced for.

For years, she had warned of the risks of a coronavirus outbreak, building up a stock of knowledge about these pathogens.

Shi published some of the most important early papers on SARS-CoV-2 and COVID-19, which scientists around the world have relied on.

But soon, the speculation about Shi and her lab began to swirl. Shi, who is known among friends for being blunt, was baffled and angry – and sometimes let it show.

In an interview with Science magazine in July, she said that Trump owed her an apology for claiming the virus came from her lab.

On social media, she said people who raised similar questions should “shut your stinky mouths”.

Shi said what she saw as the politicisation of the question had sapped her of any enthusiasm for investigating the origins of the virus.

She has instead focused on COVID vaccines and the features of the new virus, and over time, she said, has calmed down.

“I’m sure that I did nothing wrong,” she wrote.

“So I have nothing to fear.”

A top virologist in China, at centre of a pandemic storm, speaks out