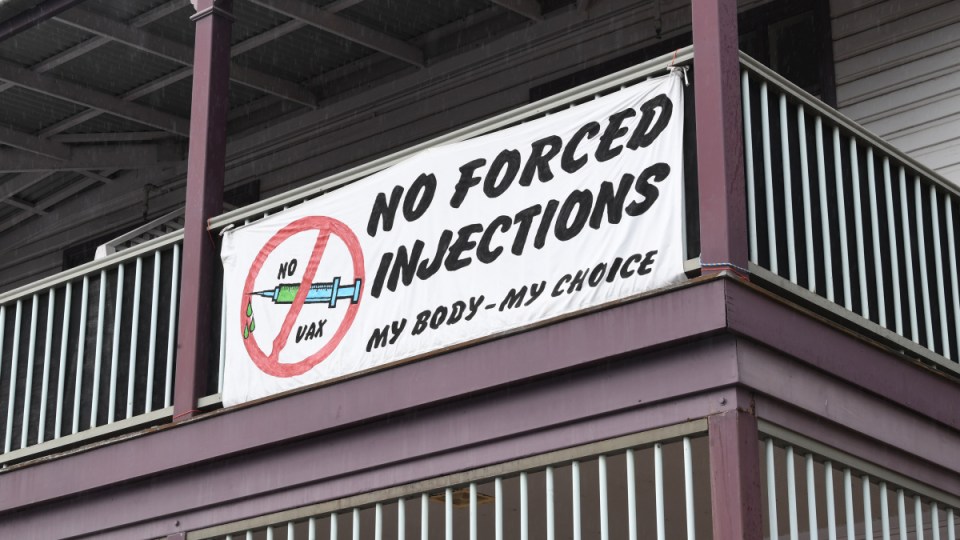 An anti-vax sign hangs outside a building on the main street in Mullumbimby, Australia. Photo: Getty

Businesses in Australia’s anti-vax hotspots are turning away vaccinated customers over baseless fears the vaccine could make them shed the virus.

This is despite exasperated health authorities confirming there’s no way to contract COVID-19 from the vaccine, or someone who has received the vaccine.

Mullumbimby, a town in the Northern Rivers region of New South Wales near Byron Bay, is known for promoting alternative lifestyles, and has previously been dubbed the “anti-vax” capital of Australia.

There, a hair salon and a yoga studio have put up signs asking people who have received a COVID-19 vaccine not to enter because they might ‘shed’ the virus and infect others.

“If you have had the COVID-19 vaccine we ask that you not enter for two weeks or longer until any symptoms subside”, one of the signs reads outside a hair salon.

One sign also states that virus shedding after vaccination has come from “first-hand accounts”, and that those who have been vaccinated are “inadvertently harming” the health of the community.

She told The New Daily it was “really disappointing” to spot the anti-vax signs in Mullumbimby this week.

“It’s not going to help us get out of the pandemic, and it’s going to put us in danger once the borders reopen,” she said, adding the Northern Rivers typically attracts at least one million international tourists every year.

“We’re going to get people from all over the world travelling into a highly unvaccinated population. We can’t afford this misinformation to be spread by our local businesses.”

Anti-vaccination attitudes have been an ongoing issue in Mullumbimby for some time.

According to the Australian Institute of Health and Welfare, only 52 per cent of five-year-olds in the Mullumbimby area were fully immunised in 2015-16, compared with 92.9 per cent nationally.

In recent years, cases of rare and easily preventable diseases, like tetanus and mumps, have been detected in the Northern Rivers region.

The whooping cough outbreak that spread through Australia in 2009 – infecting close to 19,000 people and killing three babies – was reported to have started in the Northern Rivers.

And it’s not just businesses in Mullumbimby that are hanging anti-vax signs.

A hair salon in Palm Beach on the Queensland’s Gold Coast has issued a blanket ban on anyone who has received a COVID jab “for the health and safety of our clients”.

Yazmina Adler, the owner of Khemia HI vibe Frequency Salon, is no stranger to controversy.

She made headlines in 2019 for claiming she relieved her severe period pain by rubbing her own menstrual blood on her face during a ritual meditation.

Now, she’s stopping anyone who has received the coronavirus vaccines from entering her salon, saying “the unknown health effects of the mRNA vaccine are not covered by our public liability insurance”. After facing sustained backlash over her unusual business policy, Ms Adler said she “would not – for a second – take it back”.

“I would rather (lose clients) than put my own body, my team and my clients in a position to be affected by something that we actually don’t really know much about, and was quite quickly created,” she said in an Instagram story post.

Ms Adler has gone a step further by offering advice on “how to set healthy boundaries” to other business owners who want to introduce a similar policy.

The assertion that people can develop, shed or spread the virus through receiving the vaccine is strenuously denied by the NSW Health Department.

“You cannot get COVID-19 from a COVID-19 vaccine,” a health department spokesperson said in a statement to TND.

“To get COVID-19, you must be exposed to a live COVID-19 virus. No COVID-19 vaccine currently approved for use in the world contains a live coronavirus.”

NSW Health reiterated that side effects following a coronavirus vaccination, including fatigue, headache, aches and fever, were common.