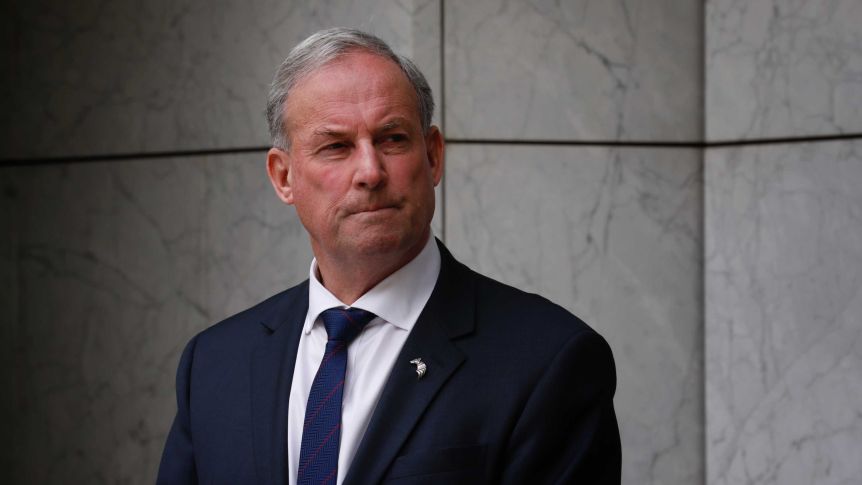 Richard Colbeck is under fire over the more than 500 deaths in aged care since the Omicron wave began. Photo: ABC News/ Ian Cutmore

Aged Care Minister Richard Colbeck does not know how many staff in the sector have been vaccinated against COVID, despite a fresh outbreak forcing several homes into lockdown.

Senator Colbeck made the startling admission while fielding questions about yet another outbreak in Victorian aged-care homes, which has exposed more failings in the federally regulated sector.

At least one aged-care resident and two staff have tested positive for coronavirus, forcing four facilities into high alert or lockdown.

The Morrison government is seeking advice on whether to mandate vaccines for all staff.

It is already mandatory in most homes for staff, residents and even visitors to have flu shots.

The federal government also under pressure to explain why it lifted a ban on employees working at multiple facilities, which was imposed after a coronavirus outbreak led to more than 650 deaths in aged care.

Senator Colbeck said as far as the government was aware, almost 40,000 aged care workers had received both doses of their vaccines.

But he had no firm idea how many aged care staff had been inoculated.

“There are a range of different options that are available for staff and we are asking the aged-care providers who hold the data to report that information back to us,” Senator Colbeck told ABC radio on Tuesday.

“We don’t have the consolidated data.”

He has asked aged care providers to report the figures alongside their data on flu vaccinations.

Senator Colbeck said the government was comfortable with the vaccine rollout in aged care – despite the gaps in some of the nation’s most vulnerable cohorts, months into the program.

He also defended the delay in reimposing a ban on aged-care workers moving between multiple sites.

“It’s actually illegal to inhibit how somebody earns a living, particularly someone who is working in a casual circumstance,” Senator Colbeck said.

“What we’ve done, in conjunction and co-operatively with the Victorian government, is instituted a ‘one worker, one site’ program where once there’s a hotspot declared.”

Despite Victoria’s concerning outbreak, the rule wasn’t reinstated until the Commonwealth designated Melbourne as a coronavirus hotspot on Thursday.

Health Minister Greg Hunt said about 4.7 per cent of aged care staff had worked across multiple sites as he stressed the importance of flexibility in periods without outbreaks.

He said case numbers were the main factor in determining whether the single-site rule was in place.

Labor’s health spokesman Mark Butler was scathing of the decision to lift the ban in November.

“This latest outbreak in aged care is a direct result of Scott Morrison’s gross negligence and dangerous complacency,” he said in Canberra.

Mr Hunt said a vaccinated 99-year-old woman, who is in hospital, had contracted the virus at the Arcare home in Melbourne’s west but had not shown symptoms.

A second resident, 95, has been retested on medical advice. He has since returned a negative result.

Of Australia’s 910 coronavirus deaths so far, 685 were aged-care residents.

More than 4.2 million vaccine doses have been administered, a target the government initially set for March.