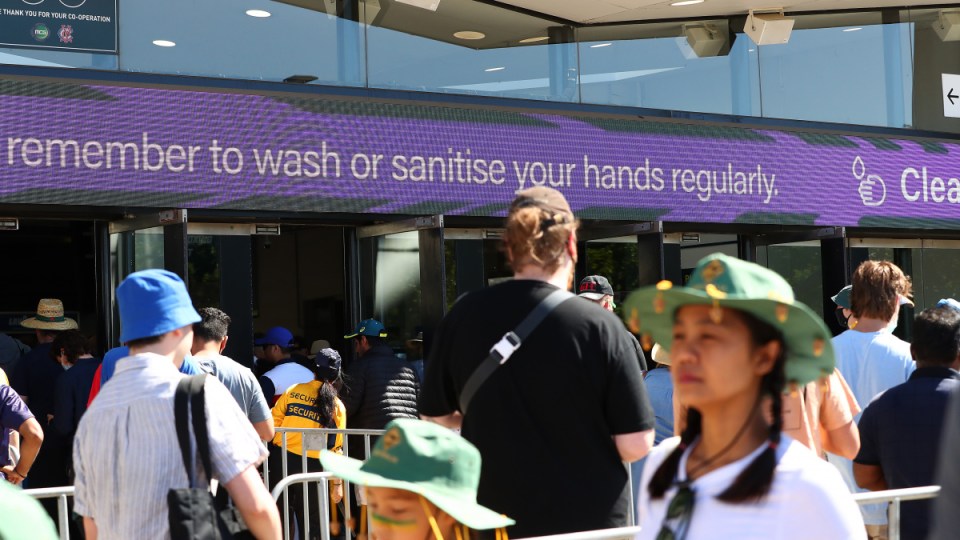 Crowds at major sporting events are in jeopardy following the imposition of new virus rules in Melbourne. Photo: Getty

The four new infections are in addition to a man in his 60s who returned a positive result on Tuesday morning, and the four reported on Monday.

Authorities believe the fifth case was the source of infection for the previous four, meaning their outbreak investigation has moved further “upstream” and is closer to finding the missing link with the Wollert case.

Genomic sequencing has confirmed the five cases are ultimately linked to the Wollert man who returned to Victoria earlier in May after acquiring the virus in South Australian hotel quarantine.

The state’s chief health officer Brett Sutton told ABC Radio Melbourne: “You can be very unlucky with a case who is particularly infectious, has been to lots of places and transmits to lots of people.”

In other developments as the outbreak widened on Tuesday, the  Western Bulldogs AFL team was in isolation awaiting COVID tests after a staff member attended a Melbourne exposure site.

The team’s training was reportedly cancelled on Tuesday, and players and staff were tested after being notified on Monday night.

They must isolate until they get a negative result.

The staff member was among thousands of people potentially exposed to the virus after being at Highpoint Shopping Centre, in Melbourne’s north-west, at the same time as one of the active cases confirmed this week.

Professor Sutton said “the public events framework will be reviewed” and may result in a “reduction in capacity”.

Earlier, New Zealand also suspended quarantine-free travel from Victoria after the outbreak in Melbourne’s north rose to five cases on Tuesday, while ticket sales for AFL matches in Melbourne were put on hold amid uncertainty about further likely restrictions.

The Victorian government announced new restrictions – including five-visitor limits for private gatherings, 30 for public gatherings and masks becoming mandatory inside – after confirming the cluster had risen to five on Tuesday morning.

The measures will remain until at least June 4, although they will be reviewed daily. Authorities have refused to rule out tightening restrictions further, if more cases are discovered.

“[But] Victoria has done it before … Victorians know exactly what to do and are probably more primed to do the right thing than almost any jurisdiction in the world.”

“We just need to see through all the interviews what exposure sites there are, what explanation we have for the trends of transmission and we go from there.”

The nine COVID cases so far confirmed in what is being called the Whittlesea cluster are spread across three households in Melbourne’s north.

Professor Sutton said Tuesday’s case might have spent days out and about while infectious.

“We do not know where he has been in the community, but the most infectious period is when you develop symptoms and in a couple of days after developing symptoms,” he said.

“All of the potential infectious period will be examined for where he has been and who he might have had contact with. Potentially he has been symptomatic the longest.”

He told ABC radio later that he he expected further caps were likely on crowds. Further announcements are likely on Wednesday.

So far, despite the new Melbourne restrictions – which take effect from 6pm Tuesday – limitations to bars and restaurants remain unchanged.

The AFL said on Tuesday morning it would halt ticket sales for games in the next two weeks. It remains uncertain if fans will still be able to attend the highly-anticipated AFL clash between the league’s top two-ranked teams Western Bulldogs and Melbourne on Friday night at Marvel Stadium.

“We are looking at range of events, whether it’s footy or other cultural events, we will work through all of those and provide further advice,” he said.

The Rising arts festival is also expected to draw crowds to Melbourne venues from Wednesday.

Other AFL matches scheduled in Melbourne include Saturday games featuring Collingwood and Geelong at the MCG and St Kilda and North Melbourne at Marvel, while Richmond host Adelaide at the MCG on Sunday.

In the NRL, Melbourne Storm are interstate until early June, as are Melbourne’s Super Netball teams.

The opening State of Origin rugby league clash between NSW and Queensland is due to be held at the MCG on June 9. NRL boss Andrew Abdo said the situation was being monitored.

“If needs be we’ll increase the protocols, and if we need to consider contingency planning for where we play State of Origin, we will.

“At this stage though it appears we don’t need to take further action.”

There are two A-League games slated for AAMI Park this weekend. However, Tuesday night’s FFA Cup game between Oakleigh Cannons and Preston Lions has been postponed after Preston players and officials were among those required to self-isolate.

Preston played Whittlesea Ranges in their NPL3 clash at B.T. Connor Reserve in Reservoir on Friday night. The venue has been listed as a tier-two exposure site.

In the NBL South East Melbourne Phoenix are set to host Cairns on Saturday night at John Cain Arena.