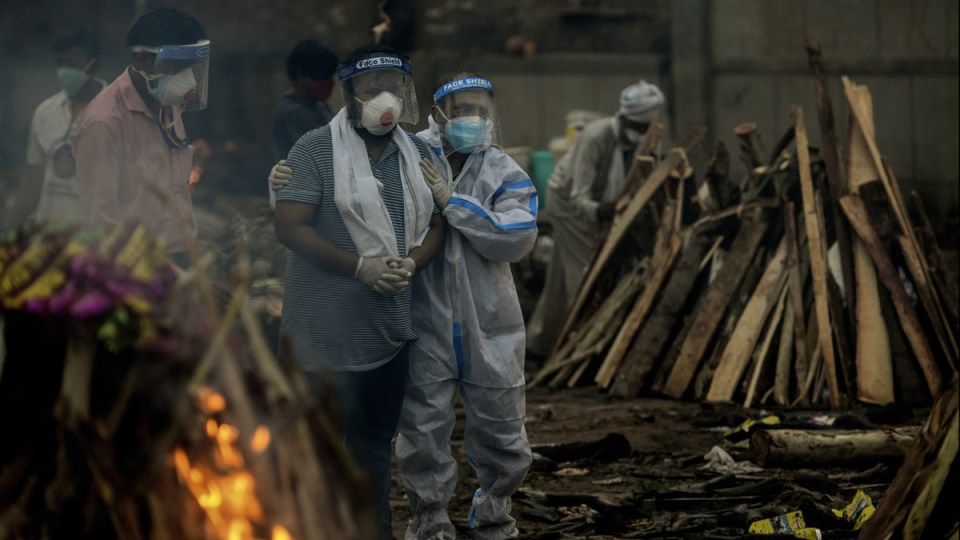 As a whole, India is being overwhelmed by the virus. And individual mourners feel the worst of it. Photo: NYT

The lifeless are picked up from infected homes by exhausted volunteers, piled into ambulances by hospital workers or carried in the back of auto-rickshaws by grieving relatives.

At the cremation grounds, where the fires only briefly cool off late at night, relatives wait hours for their turn to say goodbye.

The scenes are photographed, filmed, broadcast.

They are beamed to relatives under lockdown across India. They are shown on news sites and newspapers around the world, putting India’s personal tragedies on display to a global audience.

Local residents record the fires from their roofs to show the world why they must wear masks even inside their homes.

The smoke and smell of death is so constant, so thick, that it covers the narrow lanes for much of the day, seeping through shuttered windows.

The flames bear witness to the devastation wrought by India’s COVID-19 crisis.

They show the losses in a country where the dead and infected are widely believed to be grossly undercounted. They stand as a rebuke to a government accused of mismanagement by many of its people.

Beyond the images, the cremation grounds bear a painful routine of trauma that will weigh on families long after the headlines fade. The pandemic has stripped the final rites of their usual space and dignity.

Instead, this intimate ritual has become both a public display, with the world watching India’s crisis, and a lonely burden. Traditionally, relatives would gather to share their grief. Now, fear of infection keeps most loved ones away – or, in some cases, all of them.

“I couldn’t even show my family members those last moments,” said Mittain Panani, a 46-year-old business owner. He and his brother were the only attendees at his father’s cremation in Mumbai last week. His mother remained in the hospital with her own infection.

“You could have everything: Money, power, influence,” he said.

“Even with that, you could do nothing. It felt disgusting.”

The virus has spread so fast, with India sometimes recording more than 400,000 new cases a day, that no corner of the country remains unaffected.

But the devastation has been particularly severe in New Delhi, with more than 300 deaths a day by official figures, a likely undercount.

“I used to get six to eight bodies each day before the pandemic,” Jitender Singh Shunty, the founder of a volunteer organisation that runs the Seemapuri cremation grounds in eastern New Delhi, said last week.

“Now, I am getting around 100 bodies every day for cremation.”

Through his organisation, the Shaheed Bhagat Singh Sewa Dal, the former businessman has been providing free or discounted cremations for the poor for 25 years.

As demand has soared, Shunty’s team of full-time workers has struggled. It has added dozens of new pyres in the adjacent field.

Hindu tradition stipulates cremation as the preferred disposal method for the dead. In a belief focused on the liberation of the soul, cremation breaks attachment to the physical body.

After death, the eldest son typically leads a procession of close male relatives carrying the body to the pyre.

A Hindu priest, or pandit, leads final prayers before the fire is lit. Ashes are strewn in the Ganges or another holy river, and mourners gather at home to remember and to perform prayer rituals.

Families are instructed to collect the ashes right away, to avoid mix-ups. Unclaimed ashes, Shunty said, are kept for up to two months, then poured into the Ganges.

“Flames rising from pyres, people wearing PPE and everyone covered in plastic – it felt like the end of the world,” said Dimple Kharbanda, a movie producer who flew to New Delhi last week from Mumbai to arrange the final rites for her father, Dharamvir Kharbanda.

The retired businessman had not had COVID-19, but his rites were blighted by the pandemic.

Dimple Kharbanda begged relatives, including her father’s sister in a neighbouring state, not to come to Delhi because of the danger of infection.

“Those private moments when you want to say goodbye to your loved ones, in private, are being denied,” she said. “Death has become a spectacle.”

For families of COVID-19 victims, the cremation ground can be the last stop of a harrowing ordeal, after dragging their sick from hospital to hospital in search of a bed, after lining up for hours for oxygen.

Before the body of Darwan Singh arrived at Seemapuri – the token given to his family indicated that he was number 41 in line – the family had done all they could to save the 56-year-old guesthouse guard.

His fever had persisted. His oxygen level had dropped to a dangerous 42 per cent. For two days, the family could find him neither a hospital bed nor an oxygen cylinder.

When they found one, said his nephew, Kuldeep Rawat, he received oxygen for one hour before the hospital ran out.

The family took Singh home for the night. The next day, they waited for five hours in the car park of another hospital. The family paid a bribe of about $70 to get his uncle a bed at a free government hospital, Rawat said. Singh died overnight.

With Seemapuri fully booked, the hospital couldn’t immediately hand over the body. On April 25, it was piled onto an ambulance with five others and taken there.

Rawat said he had to go inside the ambulance to identify his uncle, then move him inside the crematory, where they waited for five hours before his turn at the pyre.

Rawat said his uncle’s family – mother, wife, daughter, son – were infected. Relatives could not come to the house for mourning and offered their condolences by phone.

“And I am still in isolation,” Rawat said, fearing that he had been infected during the final rites.

For families living around the crematories, there is no escaping the constant reminder of death as they await what feels like their own inevitable infection.

Anuj Bhansal, an ambulance driver who lives near the Ghazipur crematorium, also in eastern New Delhi, said he was worried about his four children, aged seven to 12.

Bhansal said that as the cremations reached as many as 100 a day, the neighbourhood’s children would run to a nearby garbage hill and watch.

“When they look at flames and smoke coming out of the cremation ground, they ask why it is not ending,” Bhansal said.

“They can hardly understand what is going on.”

At India’s funeral pyres, COVID-19 sunders the rites of grief