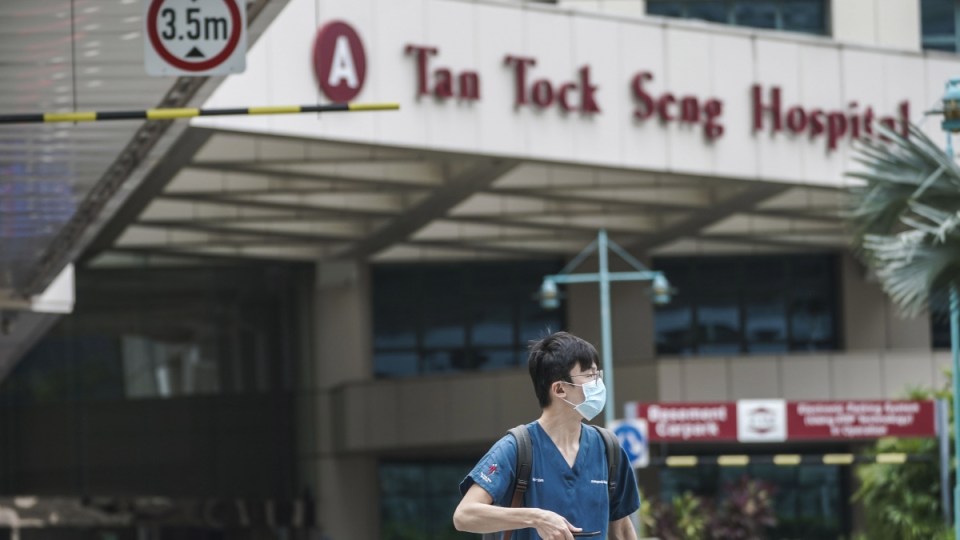 One of the new Singaporean COVID clusters began with a patient at the Tan Tock Seng hospital who initially tested negative. Photo: AAP

Hopes for a travel bubble between Australia and Singapore are receding with a spike in community COVID-19 infections in the city state, including cases of the Indian variant.

Singapore said it registered 60 infections last week, including 10 cases with the highly contagious strain first detected in India, along with seven cases with the Brazilian and one with the British variant.

The Australian government has been looking at a possible quarantine-free travel bubble with Singapore since at least March, when Deputy Prime Minister Michael McCormack told the ABC’s Insiders program: “We’re working with Singapore at the moment, potentially for a bubble in July.”

Restrictions on travel and socialising

In response to Singapore’s rise in locally-acquired infections, its government has ordered new lockdown measures.

There will be tighter curbs on social gatherings and stricter border measures from May 8.

There will also be tougher checks on incoming travellers. They will have to provide information about where they have been for the previous three weeks, instead of two weeks currently.

All visitors with a recent travel history in higher risk countries and who arrive from Saturday will also need to be in quarantine for 21 days, instead of 14.

However, Australia, along with Brunei, China, Hong Kong, New Zealand and Taiwan, is not considered high risk. Arrivals from those countries will have to isolate only until they’ve tested negative.

Social gatherings in Singapore will be limited to five people, while indoor gyms and fitness studios will be shut.

The measures amount to the tightest local restrictions since Singapore started easing curbs in the middle of 2020 after a partial lockdown. Authorities refuse to rule out further measures if the situation worsens.

Among infections detected in the latest COVID-19 cluster in Tan Tock Seng Hospital, one of Singapore’s largest, nine out of 40 cases had already been fully vaccinated.

The first case identified in the cluster was a nurse, who had been fully vaccinated but tested positive for the virus after developing mild symptoms.

Health authorities say she appeared to have been infected by a 57-year old man who initially tested negative on admission to hospital.

Other local cases have been linked to an airport immigration officer.

“Because of vaccination, these cases are either asymptomatic or had mild symptoms, and none has required oxygen so far,” health minister Gan Kim Yong said.

“Therefore vaccination remains an important tool to help lower the risk of infection and severe disease,” he said.

Though Singapore’s daily cases are only a fraction of the number being reported among Singapore’s South-East Asian neighbours, a jump in infections would be a setback for the Asian business hub, which has successfully contained its earlier outbreaks.

Singapore is to host the Shangri-La Dialogue security summit in June and the World Economic Forum in August.

Since the pandemic began, Singapore has had more than 61,000 cases and 31 deaths.

Meanwhile, Vietnam has reported 120 infections in the past six days, including several with the Indian variant and a patient who still tested positive after spending 14 days in quarantine.

The Vietnamese government is extending the 14-day quarantine period for all international travellers, and all schools in the capital, Hanoi, have been ordered to close.

Bubble with Singapore looks unlikely as its COVID cases rise