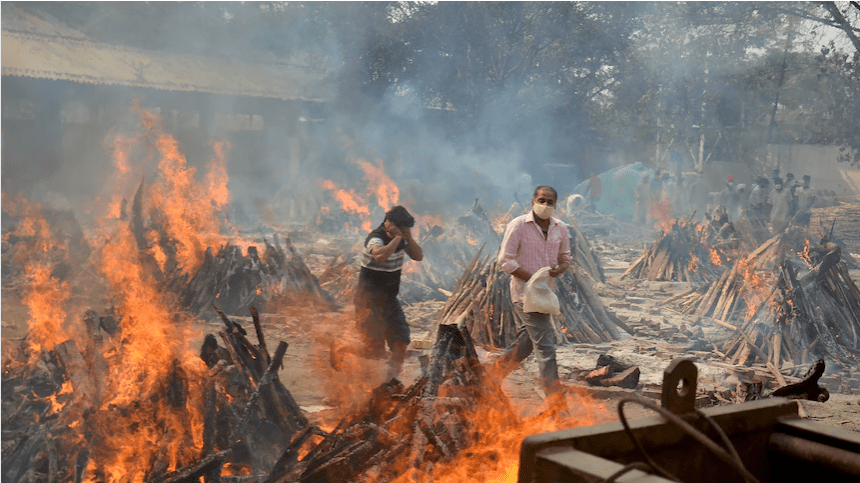 Chinese authorities have removed a controversial social media post from an official Communist Party account comparing the exhaust of a Chinese space shuttle to the flames of India’s thousands of funeral pyres.

A composite image compared the launch of the Tianhe core module, part of a large new Chinese space station, with an image of the mass cremations that have come to symbolise India’s devastating second wave of COVID-19.

The image was uploaded by the Chinese Communist Party’s powerful Central Political and Legal Affairs Commission to Weibo, the Chinese equivalent of Twitter.

Thousands of Weibo users criticised the “inappropriate” post and it was deleted after about five hours.

“The majority of those who died were [from] the underclass in India, who suffered from the inaction of the Indian government,” wrote Weibo user Laowujiadetianxin.

“India’s people should be united.”

Tensions between China and India – the world’s two most populous nations – have escalated over the past year, particularly in light of a border dispute in the Himalayas and amid upsurges in domestic nationalist sentiment.

Some Chinese netizens were less sympathetic, linking the COVID crisis in India to the border dispute.

“I have always felt that our country is too benevolent and kind to India,” wrote another Weibo user.

“India does not know how to appreciate us.”

India is suffering one of the world’s worst coronavirus outbreaks, with around 20 million cases and more than 215,000 confirmed deaths. Experts say the real numbers of infections and deaths are likely five to 10 times higher.

“We should show our fury to India,” Mr Shen wrote on the Weibo post.

Mr Hu argued that Chinese official media “should have showed sympathy to India”.

“I don’t think it is appropriate for an official account,” he said.

“As far as I know, Chinese companies have been accelerating production of at least 40,000 oxygen generators – orders placed by the Indian side, and they are working around the clock to deliver them as soon as possible,” Mr Sun was quoted as saying.

“Many Chinese firms and private organisations are also using their own channels to provide various [forms of] help to India.”

The Chinese and Indian foreign ministries have been approached for comment.