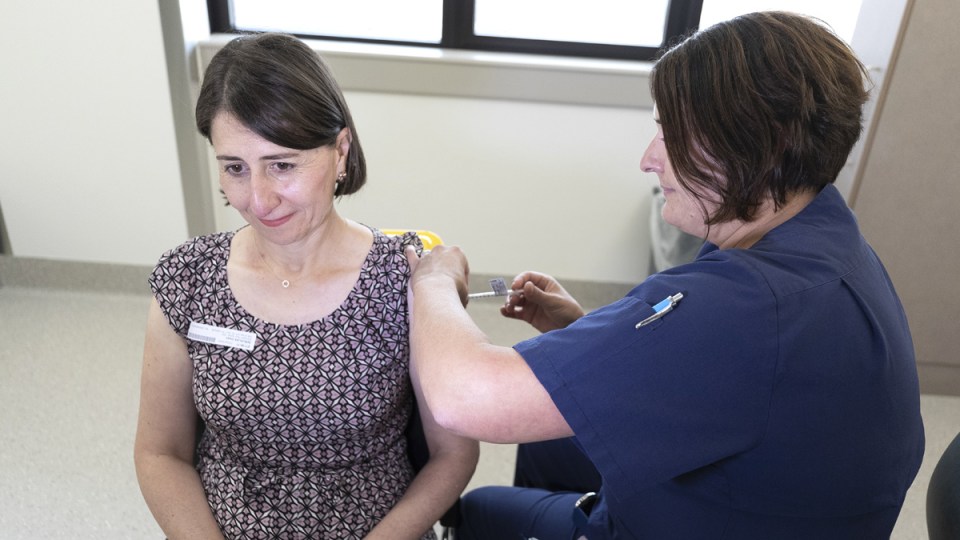 Australia risks being left behind the world unless the rollout of COVID-19 vaccines gets back on track, NSW Premier Gladys Berejiklian says.

“There will come a point when the rest of the world starts engaging with each other more and we can’t afford to be left behind,” she said on Monday.

“I’m really keen to get the rollout happening as fast as we can.

“I do have a sense of urgency about it.”

NSW is pursuing its plan to set up mass vaccination hubs to inoculate tens of thousands of people each week, despite ongoing supply problems and concerns about a rare side effect from the AstraZeneca vaccine.

“I know that some people don’t think there is a sense of urgency because we’re doing so well, but things can change very quickly and I don’t want to see our citizens left behind because the rest of the world starts trading with each other, starts travelling … I do have a sense of urgency about it,” Ms Berejiklian said.

Late on Sunday, Prime Minister Scott Morrison admitted his government was unable to set “any new targets for completing first doses” of the COVID vaccine, admitting defeat on his October deadline.

The admission potentially pushes to 2022 the timeline for some Australians to get their first jab.

It follows days of bruising recalibrations for the federal government, with medical advice against the use of the AstraZeneca for under-50s and Pfizer committing only to deliver its doses in the final stretch of the year.

“Compare that to anywhere else in the world where they are getting thousands, if not tens of thousands of new community transmission cases each and every day, I know where I would rather live.”

“Targets may well change and then the Prime Minister needs to come clean with Australians about what the chain is and what the reasons are for those changes,” he said.

“You can’t have a plan without targets, though. It is simply not a plan. Australians need to know how this is progressing.

“They need to have economic confidence that getting their businesses up and running, getting jobs going again, being able to travel first of all within Australia and then ultimately overseas as well. To make those plans with confidence.”

NSW is still trying to ascertain is exactly how many more doses it will receive.

“We have a rough idea about the next five weeks, which involves us finishing the 300,000 doses we were asked to do,” Ms Berejiklian said.

“But beyond that, we are still waiting for some confirmation and it has been lumpy.”

The federal government has asked NSW Health to vaccinate 300,000 people, including all high-risk frontline workers and their families.

“I’m keen to get the vaccine rollout back on track and we await advice and information from the Commonwealth as to what that might look like,” Ms Berejiklian said.

Elsewhere, the Victorian government will continue to hold off on giving AstraZeneca vaccinations to people under 50.

Jabs for the younger cohort were temporarily stopped on Friday following the advice from the Commonwealth about the risks of the blood clot side effect.

On Monday, Acting Victorian Premier James Merlino said AstraZeneca jabs would remain on hold to allow for health risk information to be translated into languages other than English.

The government is also waiting until staff at state-run vaccine centres are trained to adequately inform younger vaccine recipients of health risks and which one – AstraZeneca or Pfizer – they might prefer.

Given the AstraZeneca pause, the Victorian government has also asked the Commonwealth to re-direct all of those shots from state vaccine centres to GP clinics for the next fortnight, to enable them to deliver more vaccinations to the elderly.

“This is a common sense approach to get this thing done as quickly as possible,” Mr Merlino said on Monday.

“We say to the Commonwealth, don’t send us AstraZeneca – the state sites – for the next fortnight, send it to our GPs so that GPs can administer the vaccine particularly to our vulnerable over 70s.”

Australia risks being ‘left behind’ amid vaccine hitches: Gladys Berejiklian