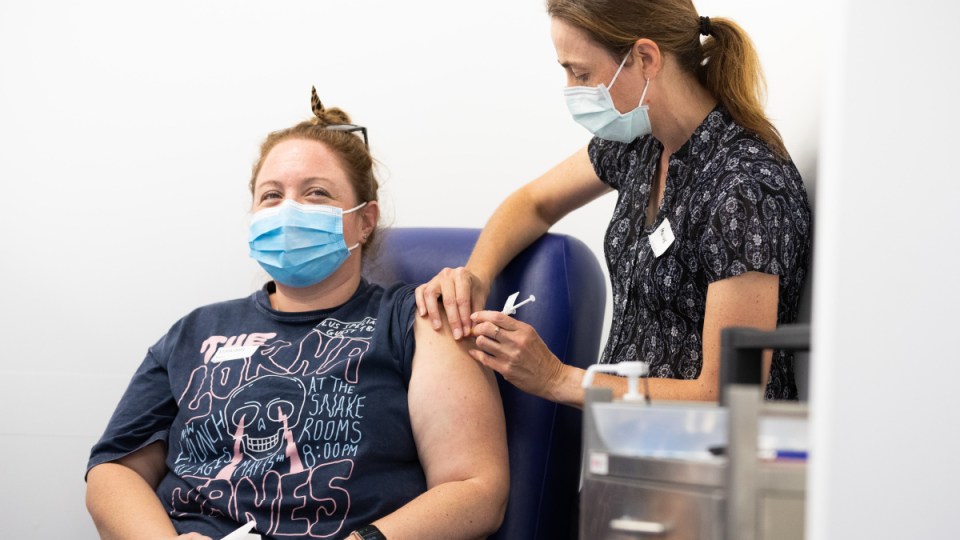 Australia's vaccination program is speeding up – but it looks increasingly unlikely even renewed targets will be met. Photo: Getty

The federal government’s plan to vaccinate everyone in the country by October will be a “big stretch”, the NSW Premier says.

Vaccinating NSW’s population of six million by October was “a big stretch, even for the first shot”, Glady Berejiklian said on Tuesday.

She laid the blame for delays at the federal government’s feet.

“The NSW government was asked to do 300,000 and we’ve done more than a third of that already. We’re actually ahead of schedule in terms of what our job was,” she said.

“It’s up to the Commonwealth to work with us to allows us to help them with the remainder of the vaccine rollout.”

Ms Berejiklian said NSW would try to get “as close to six million people … as possible” vaccinated by year’s end.

The state had vaccinated 127,339 people as of 8pm Monday. Nationwide, Australia was expected to hit a million shots by close of business of Monday.

Ms Berejiklian said it was important not to rely only on big vaccine hubs after the federal government announced mass vaccination centres could be rolled out across the country.

“Having one centre detracts from people being access from their local communities and really ignores the rural and regional communities that need to have the vaccine as well,” she said.

Federal Labor also weighed into the vaccine criticism on Tuesday.

“Scott Morrison [says] that this is not a racist. Frankly this is a race,” health spokesman Mark Butler said.

“There is a very strong timing imperative to get our population vaccinated with the current generation of vaccines in time to be able to avail ourselves of any booster shots that come on the market to deal with the mutations of the variance to this virus that are already spreading right throughout the rest of the world.

“There is also, frankly, a race to ensure we are fully vaccinated to give the economy confidence, to give jobs confidence, to ensure that we are able to open up and recover in a way that you are starting to see again around the rest of the world.”

Mr Butler said it was time for the federal government to admit its program was not working and adjust its strategy.

“That might mean bringing pharmacists more quickly into the system, it might mean max vaccination centres of the type you see in pretty much every country I am looking out around the world,” he said.

“We need to get on with the job of vaccinating our population.”

Australia’s one million-shot milestone is a long way short of the four million inoculations the federal government promised by the end of March.

The adjunct professor said Australia had inoculated just 2.34 in every 100 people.

“We’re somewhere about 90th on the world league tables – sandwiched between Bolivia and Albania,” he told Melbourne radio 3AW.

“However you want to spin it, we are not doing very well.”

Professor Bowtell said there were serious problems with both vaccine supplies and distribution.

“We are not moving fast enough with mass vaccination centres and so on to supplement the distribution through the general practice networks and the doctors surgeries,” he said.

“We are falling way behind.”

Ms Berejiklian also made it clear she wouldn’t tolerate the federal government issuing misleading data about the rollout.

“We understand that sometimes there’s very late notice when we’re told how many doses we can have,” he said,

“But what we can’t accept is when that data is manipulated or expressed in a way that tries to suggest that NSW isn’t doing enough.”