Professor Michael Kidd said the side-effect risks “remain very low” and the rollout would not be paused during ongoing investigations.

“I acknowledge that these reports lead to uncertainty and anxiety and we will continue to provide more information to you as soon as we have it available,” Professor Kidd said.

“The risks of serious side effects remain very low.

“But safety is paramount, which is why ATAGI and the TGA continue to do due diligence on this case.

“We have not been advised at this time by ATAGI or the TGA to pause the rollout of the AstraZeneca vaccine in Australia.

“We continue to follow the medical advice of our national experts.”

The decision comes as the states are frustrated at the pace of the federal government’s vaccine deliveries, with the target of vaccinating 4 million people by the end of March missed by more than 3.3 million.

Professor Kidd welcomed the idea of NSW helping to speed up the COVID-19 vaccine rollout and said other states and territories could do the same.

Prime Minister Scott Morrison has agreed to let NSW help deliver the vaccine in the state after Premier Gladys Berejiklian offered to do so.

Labor said delivery of vaccines under Mr Morrison’s leadership had become “a mess”.

“For the umpteenth time in this pandemic, he’s going to have to be bailed out by state governments,” Federal opposition health spokesman Mark Butler said.

The government had aimed for all Australians who want a vaccine to get one by the end of October, a goal critics say is out of reach. 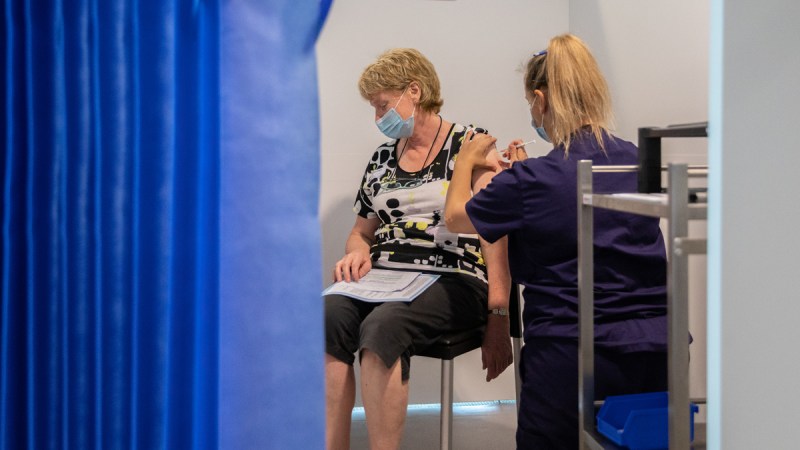 “If we were to race out and set up a mass vaccination centre tomorrow to fast track all of our health workers, we would run out of the vaccine in a couple of days,” she said.

Most Australians are meant to receive the AstraZeneca vaccine which has been under scrutiny since a 44-year-old man was admitted to hospital with a rare blood clotting disorder.

The man received the AstraZeneca jab on March 22 and is the first Australian known to have developed the illness, which has presented in small numbers of vaccinated people in the United Kingdom and Europe.

Prof Kidd emphasised that the risk of severe illness and death from COVID-19 in the largely unvaccinated Australian population was a “far greater” risk than the “extremely rare” blood clot disorder.

The Therapeutic Goods Administration and Australian Technical Advisory Group on Immunisation have been advising the government’s central medical advisory body throughout the Easter weekend with input from UK and European counterparts.

Only one locally acquired case was reported in Australia on Saturday – a Queensland man who has been in quarantine through his entire infectious period.

South Australia has watered down its ‘hard border’ controls with Greater Brisbane, but some restrictions still apply.

While most travellers were able to quit quarantine as of Saturday, when the changes were announced, they will not be allowed to enter high-risk health sites or attend large events with COVID management plans.

The changes also affect those arriving from Byron Bay, which South Australian authorities included in their initial COVID security measures.

The key other change is that arrivals will only be subjected to three tests — on days one, five and 13.

A small number of travellers who have been at coronavirus exposure sites will not be allowed out of quarantine until their full two-week stay is over.

“Through their [Queensland’s] excellent contact tracing they’ve been able to establish where every single one of their cases had caught their infection from,” Acting Chief Public Health Officer Michael Cusack said.

“The person who was identified as positive today was already in quarantine, so they’re very safe and secure in that sense, and at the same time, their testing rates have been very high.”