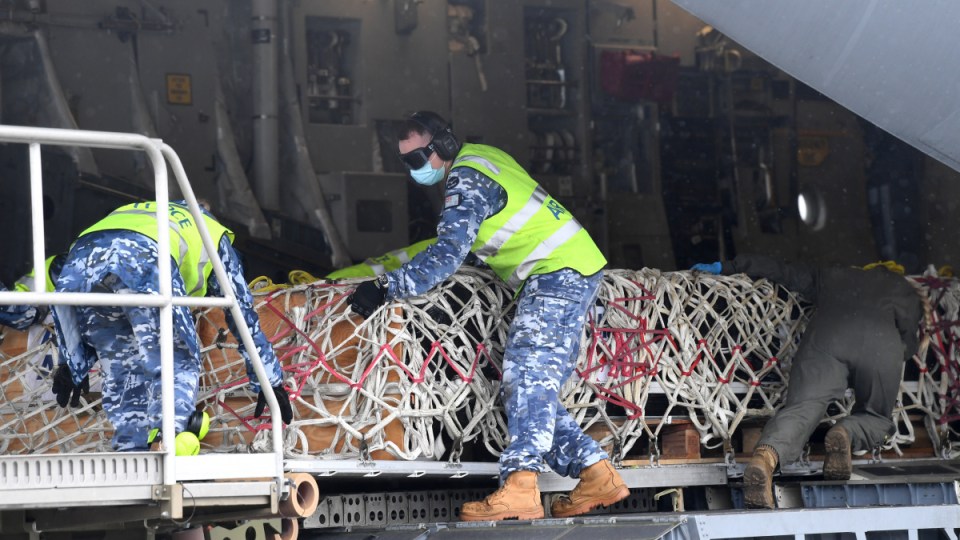 Airlift: A small amount of Australian vaccine aid has made it to PNG. Photo: AAP

PNG, which is just kilometres from Australia’s northernmost islands, has recorded 6619 virus cases and 60 deaths, with 144 more cases added on Friday.

The island’s biggest hospitals have reported that as many as 80 per cent of test results are coming back positive, with PNG Prime Minister James Marape saying the virus has “broken loose”.

Queensland’s Chief Health Officer Jeannette Young on Saturday said she was “very concerned” for Australia’s nearest neighbour after the number of infections almost doubled in 10 days.

“This is terrible for PNG, they managed this so well until recently,” she told reporters.

“It’s because the virus is changing, it’s now got out into their communities and as we’ve always suspected might happen, it’s spreading very, very quickly.

“For us here, I am not concerned, we have very good systems in place,” she said.

We know when (people from PNG) come into Queensland, they’re going into hotel quarantine or directly to hospitals.”

It comes as COVID-19 vaccinations are rolled out across Cape York Peninsula in the far north of the state and the Torres Strait Islands to reduce the risk of the outbreak spreading south from PNG.

Saibai, the northernmost of the island chain, is just a few kilometres, or a short dinghy trip, from PNG.

It was the first site health officials administered the vaccine due to a heightened risk to the community.

Vaccination teams will continue working in the Torres Strait throughout April with Horn and Hammond Islands, about 20km northwest of the tip of Cape York, the next to receive the jab from Tuesday.

There are currently no quarantine requirements or travel restrictions for Queensland’s remote Aboriginal and Torres Strait Islander communities.

However a treaty that allows villagers on the northern islands to travel between the Torres Strait and PNG without visas was suspended in March 2020.

A small team of Australian medical professionals was recently dispatched to PNG to assist the country’s overburdened health system.

An additional field hospital is set to open on Monday, but the country’s vaccination drive has been hampered by misinformation shared on social media.

Faith groups, medical experts and humanitarian organisations earlier this week urged the Morrison government to commit to sending one million Australian-made doses of the vaccine to PNG.

Australia has previously sent 8480 doses of the AstraZeneca vaccine to PNG following warnings the situation was becoming a humanitarian crisis.

Australia’s Department of Foreign Affairs said the PNG government does not expect to be ready to rollout a mass vaccination campaign until mid-May.

Almost 300,000 doses are expected to be delivered to PNG in April through the global COVAX arrangement for poorer nations.

PNG has a population of about nine million people.