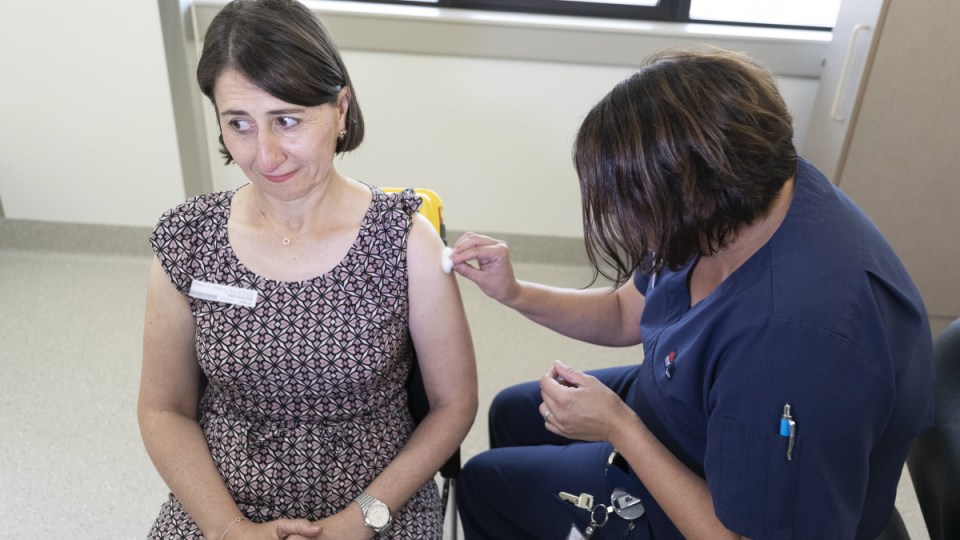 “I am pleased the prime minister in a letter … welcomed our offer,” Ms Berejiklian said.

Canberra has copped flak over its handling of the vaccine rollout, with the slow pace blamed in part for Greater Brisbane’s recent three-day lockdown.

Queensland health authorities claim they only have a few days’ stock of both vaccines after the state was accused of stockpiling the jabs and leaving frontline workers vulnerable.

That state on Saturday reported one new locally acquired COVID-19 case – a man already in quarantine.

The NSW government has also criticised the federal government’s rollout after leaked data suggested states were to blame for delays.

Any delays in delivering jabs were due to the erratic supply the federal government has overseen, it said.

Four million Australians were due to have their jabs by the end of March, a target missed by more than 3.3 million.

The government had aimed for all Australians who want a vaccine to get one by the end of October, a goal critics say is out of reach.

“We need to work together to meet the federal government’s October deadline,” Ms Berejiklian said.

In regards to the blood clot investigation, the Therapeutic Goods Administration and the Australian Technical Advisory Group on Immunisation on Saturday is due to update the Australian Health Protection Principal Committee.

A man aged in his 40s is in a Melbourne hospital with the rare condition, which he suffered for the first time after receiving the AstraZeneca vaccine on March 22, the ABC reported.

Similar, though very rare, cases have been reported in the UK and Europe in AstraZeneca jab recipients, though no causal link has been found.

The Dutch government has temporarily halted AstraZeneca coronavirus vaccinations for people under 60 .

The decision in the Netherlands comes three days after authorities in Germany also stopped using the AstraZeneca’s vaccine in under-60s.

A Dutch organisation that monitors vaccine side effects on Friday said it had received five reports of blood clots with low blood plate counts following vaccinations.

All the cases occurred between seven and 10 days after the vaccinations and all the people affected were women aged between 25 and 65 years.

He emphasised on Friday the risk of Australians contracting COVID-19 was “far greater” than the risk of a rare blood clotting disorder.

“We are taking this very seriously,” Prof Kidd told reporters.

“I acknowledge that people will be anxious and we will get more information as soon as it’s available.”

In Brisbane there was relief at the news that the local hotspots appear to be under conrol.

The one new case announced on Saturday was a man who had visited a local brewery, but he was already in quarantine when he fell ill and not infectious in the community, said Chief Health Officer Jeannette Young.

“That’s perfect. He’s been in quarantine for his entire infectious period, so there is no risk here at all,” she told reporters.

Dr Young said the man was at Black Hops Brewery in Burleigh Heads on March 20 before being ordered into quarantine seven days later by health workers.

“He tested negative on March 27 and then he’s become unwell and had now tested positive,” she said.

Dr Young urged people to continue checking the Queensland Health COVID-19 website for updates on contact sites, after a historical case was identified as a nurse who contracted the virus from a man who arrived from Europe last month.

The traveller – who became a patient at the Princess Alexandra Hospital in Brisbane – has now been labelled the superspreader who infected a doctor that sparked the latest Queensland outbreak.

The nurse was the missing link in the first cluster and was infectious between March 10 and 23 but didn’t develop symptoms.

“We’re asking anyone who attended a venue she was at to please come forward and get tested, and also anyone in their household,” Dr Young said.

Another patient who stayed in the same hospital room as the traveller also became infected with the virus, leading health officials to believe there could be a “problem with the environment”.

“It could be coincidental but it is suspicious that both of those patients were being managed in the same room one after the other,” Dr Young said.

Two overseas travellers were diagnosed with the virus in hotel quarantine on Saturday. There are currently 74 active cases in the state.

Health restrictions will remain for the next fortnight.