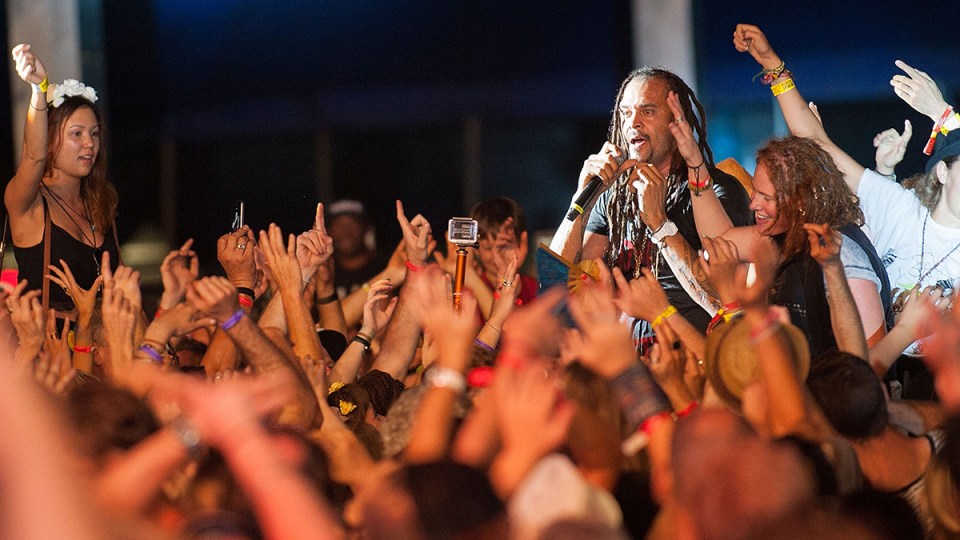 Up to 15,000 people are expected to attend the festival per day. Photo: Getty

One of NSW’s biggest music festivals has been cancelled for the second year in a row after a COVID outbreak in northern NSW sent authorities scrambling.

The Byron Bay Bluesfest, which attracts up to 15,000 revellers per day to its outdoor festival site, was due to kick off on Thursday.

State Health Minister Brad Hazzard signed a public health order shutting down the event just a day before it was due to begin.

He said the festival had been cancelled due to the risk festival-goers – some of whom travel from interstate – would spread the highly infectious COVID-19 variant across the country.

“While the cancellation of Bluesfest is disappointing for music lovers and the local community, I hope that ticket holders would support Bluesfest and hold on to their tickets as I understand Bluesfest will be working on a new date as soon as possible,” Mr Hazzard said.

He acknowledged ticket holders would be “disappointed” but said officials had no option but to scrap the event.

The cancellation comes after a local man in his 20s contracted coronavirus after a visit to the Byron Beach Hotel at the weekend.

“NSW Health is adopting a cautious approach to keep everyone safe,” the state government said.

Ticket holders from locked-down Brisbane had already been told they would no longer be welcome at the festival.

Mr Hazzard urged patrons to “hold on to their tickets”, and said the event organisers were “working on a new date as soon as possible.”

Earlier on Wednesday, Mr Hazzard had warned all involved to stay “alert” for announcements from health authorities.

“It would have been better if the Bluesfest had been perhaps in another few months, instead of right now,” Mr Hazzard said.

“It is important and complex that we weigh up the competing interests of trying to let people do what we have always done in NSW and that is have as much freedom as possible … but also to make sure we keep people safe.”

With a jam-packed lineup including Jimmy Barnes, Kasey Chambers and other household names, the 32nd annual Bluesfest was set to go ahead from April 1-5.

The event was also cancelled in 2020 due to the coronavirus pandemic.

A host of other restrictions were imposed on four northern NSW local government areas – Byron, Ballina, Tweed and Lismore – after a Byron Bay man in his 20s tested positive to COVID-19.

The man was at the Byron Beach Hotel at the weekend during a hens party linked to several Queensland coronavirus cases.

He is in self-isolation and his household contacts have so far tested negative. The man’s case will officially be included in NSW’s figures on Thursday.

Announcing the case on Wednesday, NSW Premier Gladys Berejiklian imposed immediate restrictions on northern NSW, including limiting home gatherings to 30 people and enforcing the one-person-per-four- square-metre-rule in hospitality venues. They will be in place at least until Tuesday.

“It is our very strong preference that if you live in any of those four local government areas, that you don’t travel outside those areas,” Ms Berejiklian said.

“We won’t be policing that but it is very strong advice … if there is community transmission, we don’t want it seeded to other parts of NSW.

“Given it’s the Easter weekend, there’s a lot of movement … we don’t want a super-spreading event like the northern beaches which then resulted us in having to go further.”

As yet, there are no plans to close the NSW-Queensland border or to further tighten the “proportionate” restrictions.

Nor would NSW holidaymakers be discouraged from visiting Byron Bay, Ms Berejiklian said.

But she has urged NSW residents to cancel plans to visit Queensland during the Easter break, warning they might become trapped if Brisbane’s lockdown is extended.

There are public health alerts for a host of venues in Byron Bay, Ballina and East Ballina.

Earlier, Queensland Premier Annastacia Palaszczuk said a decision on extending the greater Brisbane lockdown would be made on Thursday morning.

“Fingers crossed we will be looking good for Easter,” Ms Palaszczuk said.

The lockdown is not due to end until 5pm Thursday,

There were two new community COVID cases in Queensland on Wednesday.

They took the state’s total number of community infections to 17, including with two COVID-19 patients who initially spread the virus to hospital workers.

Queensland is trying to manage two clusters, both linked to healthcare workers at Brisbane’s Princess Alexandra Hospital, which has been locked down.

Deputy Premier Steven Miles has hit out at the Morrison government over the outbreaks – blaming his federal colleagues for the tardy rollout of COVID vaccines to exposed health workers.

“We have not had certainty of supply to our hospitals through the vaccine rollout,” Mr Miles said on Wednesday.

He claimed the states are “doing what they can” but have been limited by the slow distribution of supplies from the Commonwealth.