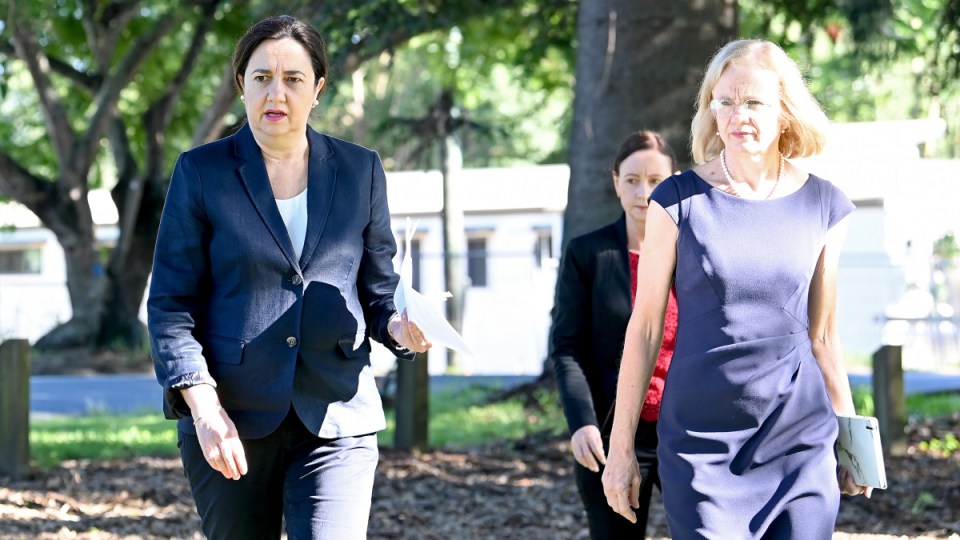 A three-day lockdown will be imposed for Greater Brisbane. Photo: Getty

Alerts have been issued for two venues in Byron Bay as a worrying coronavirus outbreak in Queensland threatens to spread interstate.

Queensland Health has advised two positive virus cases, a nurse and her sister, travelled to the beachside village across the NSW border over the weekend.

The Queenslanders attended a number of popular venues in Byron Bay before returning home.

Anyone who attended the Byron Beach Hotel on March 26 between 7.15pm and 8.30pm, or The Farm Byron Bay on March 28 from 8.00am to 9.30am should get tested immediately and self-isolate.

More than 20,000 people have been contacted by NSW Health after cases were discovered in Queensland, with nine people deemed close contacts.

NSW chief health officer Kerry Chant said anyone who has been in any affected hot spots in Brisbane since March 11 should isolate for two weeks and get tested.

Health authorities are closely monitoring northern NSW where there’s “lots of contact” between locals living and working in border towns, she said.

Anyone in Byron Bay who experiences even mild symptoms is being urged to get tested and self-isolate.

While the border has not yet been closed, non-essential travel to the Greater Brisbane area is discouraged.

Earlier on Monday, a snap lockdown was announced for Brisbane, raising concerns for nationwide travel chaos less than a week out from Easter.

Queensland Premier Annastacia Palaszczuk ordered a three-day lockdown of Greater Brisbane from 5pm on Monday, after four new community cases of coronavirus were detected in 24 hours.

Two of these cases sparked the alerts in Byron Bay.

“I know this is a really big call. I know it is very tough but let’s do it now and let’s do it right,” Ms Palaszczuk said.

Ms Palaszczuk later took to Twitter to remind Queenslanders not to strip supermarket shelves in panic over the lockdown.

“Please don’t rush out and panic buy. The supermarkets are full of supplies and will operate as per usual. Groceries and essentials will still be available while we’re in lockdown,” she wrote.

Anyone who has been in Brisbane since March 20 has been told to abide by the lockdown, with masks mandatory across the state.

The lockdown will cause major headaches for families planning to visit Brisbane over Easter, as well as the many thousands of hospitality and tourism companies who rely on their business.

Other states and territories have begun to impose quarantine requirements on travellers from Brisbane, with travel advice updated for Tasmania and the ACT.

Anyone who has returned to Canberra from Greater Brisbane after March 15 must enter quarantine until at least 6pm April 1.

Those who returned between March 11-14 must get tested and isolate until a negative result is received.

Premier Peter Gutwein said anyone travelling from Brisbane, Ipswich, Logan, Moreton Bay or Redlands is required to quarantine for up to two weeks.

Federal Health Minister Greg Hunt has confirmed getting a COVID jab is an acceptable reason to leave home during Brisbane’s tough snap lockdown.

Mr Hunt said he has discussed the decision with Queensland Health Minister Yvette D’Ath and they have agreed.

“Importantly the message that Queensland has given is one I would emphasise as well, vaccinations are considered a critical reason to leave home. We would encourage all patients, subject to checking with their doctors, to continue with their vaccination programme,” Mr Hunt said.