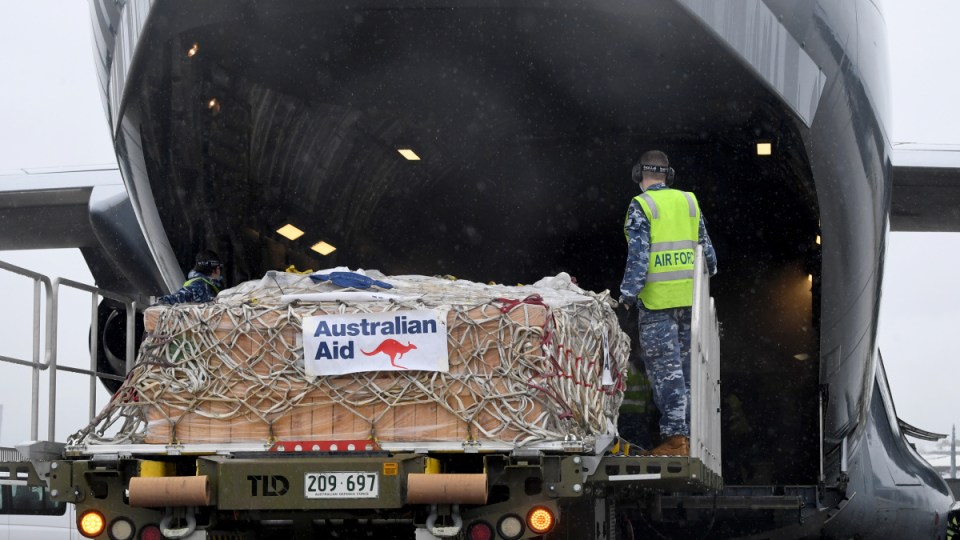 The Morrison government is being urged to step up its assistance to PNG as it battles COVID-19. Photo: AAP

The Morrison government is being urged to send more of Australia’s COVID-19 vaccines to Papua New Guina as the country is overwhelmed by the coronavirus.

Morgues in our Pacific neighbour are full and hospitals have become so overrun that patients are being treated on the floor.

The nation is bracing for thousands of deaths in the coming weeks.

There is now a push for Australia to send its COVID vaccines to PNG, which would slow the rollout here but potentially save thousands of lives.

Not only is it Australia’s responsibility to help our neighbours in their time of need, but bolstering support would avoid an “arms race” with China, said Jonathan Pryke, head of the Lowy Institute’s Pacific Islands program.

“Australia has made some great initial steps but we need to send in the ADF to take care of the logistics, and more of Australia’s vaccine stockpile,” Mr Pryke told The New Daily.

“No one else is taking the lead.”

Australia has sent more than 8000 vaccines to inoculate frontline health workers but the government doesn’t expect to begin its major rollout until May.

Australia is the only country positioned to help PNG through the crisis, Mr Pryke said.

“The situation in PNG is extraordinarily dire, it’s bordering on catastrophic.”

Alongside the humanitarian crisis is a looming ‘arms race’ between Australia and China over who can help vaccinate the most people in the Pacific.

Some Pacific countries have already made considerable headway in vaccinations while others, including PNG, Fiji and the Solomon Islands, are not expected to hit critical mass until 2025.

Australia has pledged $100 million to develop more than one billion vaccines for the Indo-Pacific region, as well as supporting the global COVAX effort.

China’s vaccine diplomacy has been dogged with its own issues.

There has been strong concern that immunity levels from China’s vaccine are lower than in other vaccines, and logistical problems have created uncertainty over whether China will fulfil its mission to help developing countries.

The World Health Organisation is yet to validate the efficacy of China’s jab, but once the stamp of approval is given the race will be on to inoculate the Pacific.

“China is looming. This will be a geopolitical battleground and it will turn into a race. Australia wants to be the partner of choice,” Mr Pryke said.

Minister for International Development and the Pacific Zed Seselja said the Morrison government was committed to seeing the region vaccinated.

“Over the last year we have provided a huge amount of COVID-19 response and recovery support across the Pacific, including in PNG,” Senator Seselja said.

“And we’ve committed to partnering with our Pacific neighbours, to access full coverage of COVID-19 vaccinations.”

Left in lurch after Europe says no

But the current crisis has put a spanner in the support plan as the federal government tries to wrangle one million vaccines from Europe to urgently send to PNG.

There are growing doubts over whether those vaccines will come, as European countries fight to hang on to their own domestic stocks.

Department of Foreign Affairs and Trade secretary Frances Adamson told Senate Estimates on Thursday the idea of using Australia’s stocks to help PNG had been floated.

“The possibility of some of Australia’s domestically produced stocks being able to be used for this purpose is certainly something that is live but yet formally to be decided by government,” Ms Adamson said.

Opposition Pacific spokesman Patrick Conroy said the government needed to speed up the pace and send 20,000 vaccines over urgently.

“Supporting our Pacific neighbours during this pandemic is not only the right thing to do from a humanitarian perspective, it is also in Australia’s national interest to provide whatever support is necessary to help prevent an outbreak spreading to our country,” Mr Conroy said.

“If Australia does not step up and provide adequate and timely assistance, this will create a vacuum that will be filled by nations such as China.”

Allan Behm, head of the International and Security Affairs Program at the Australia Institute, said the crisis was actually a chance for Australia to work together with China.

“One angle on this is the ‘great power’ competition which is building in the Pacific where anything that comes along is seen through the lens of how the US might see off China,” Mr Behm said.

“The other way to look at it is that what is happening in PNG is a humanitarian crisis and whatever you can do to save the lives you do it.

“You put all considerations to one side and you address the existential threat.”

Australia should choose the latter path, help out our neighbour and co-operate with China to get the Pacific vaccinated as quickly as possible, Mr Behm said.

“We need to use our bilateral linkages to focus on the health needs of the citizens of those countries and show real statesmanship rather than imagining we are in a schoolyard fight.”