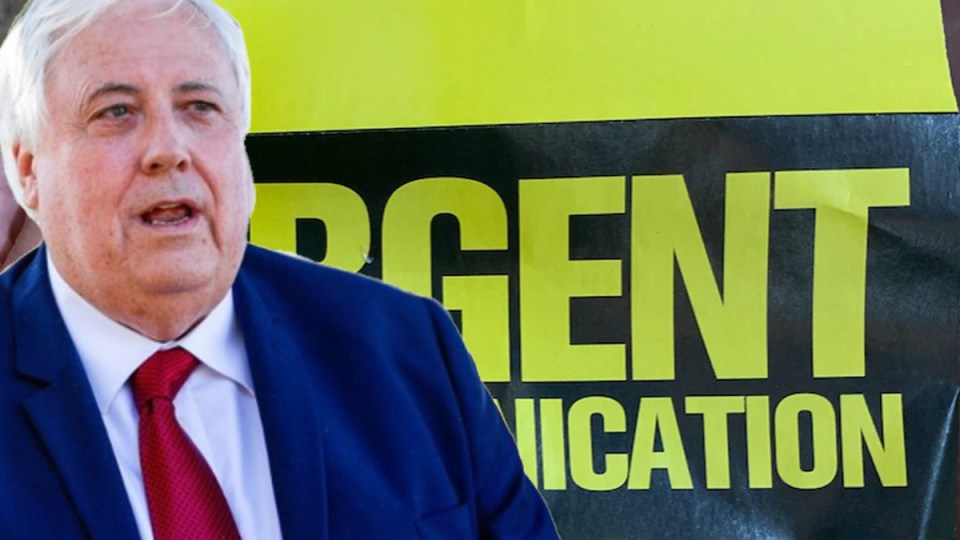 Mr Palmer has also been told off by the TGA for a misleading pamphlet he distributed across the country.

Scott Morrison has blasted COVID vaccine misinformation, including flyers being distributed across the country by mining magnate Clive Palmer.

The Prime Minister said the federal government was doing everything it could to clamp down on false information being spread by Mr Palmer and others.

“This is misinformation pure and simple. Don’t listen to it, it’s rubbish. It’s complete rubbish,” he said.

Mr Morrison said any attempt to drag the COVID vaccine program into a political debate was “not on”.

Earlier, Labor urged the Australian Electoral Commission to investigate Mr Palmer about the distribution of anti-vaccination flyers in his political party’s colours.

The yellow and black flyers, signed by Mr Palmer, question the speed of the development of virus vaccines and claim appropriate safety checks and balances have fallen short.

He describes the vaccines as being subject to “emergency use” authorisation.

There is no reference to Mr Palmer’s United Australia Party. Nor do the flyers have any authorisation, as required by law for political communications.

The federal opposition alleged the pamphlets were being used as part of campaigning by Mr Palmer and should be treated as official party material.

Labor health spokesman Mark Butler said the flyers had been distributed in South Australia, NSW and Queensland, and he suspected also in other states.

“The COVID vaccine rollout and the government’s response to the pandemic generally are very clearly going to be big election issues in the lead up to the 2021 or 2022 federal election,” Mr Butler told the ABC’s AM program on Friday.

“Clive Palmer, who is so closely associated with the party he began, is spewing misinformation in exactly the same way he runs an election campaign.

“It’s important the Electoral Commission get ahead of this, and if Mr Palmer does want to do this thing he’s required to properly authorise it in accordance with our electoral laws.”

“Where there has been misinformation on Facebook, I’ve deliberately contacted, very clearly contacted Facebook for them to act on that,” he told the ABC.

“If it’s happening through newspapers or letter boxes – whichever way Mr Palmer is trying to sow disinformation – it should be called out.”

“The [TGA] does not have an ’emergency use authorisation’ pathway for COVID-19 vaccines,” a TGA spokesperson told the ABC.

Most countries that have approved emergency use of vaccines, including Britain, the US and Canada, were in worse COVID situations than Australia, the spokesperson said.

The TGA urged Australians to “rely on trusted information sources”, a position echoed by the Australian Medical Association.

“Clive, we’ll leave the mining to you and you leave the medicine and the science to us,” the association’s vice-president Chris Moy told the ABC.

“The problem is, say somebody doesn’t get the vaccination because of his message, which is clearly not based on any particular expertise on his part, what happens if they later get COVID or even die later?

“He’ll be completely removed from direct responsibility for it, but as far as I’m concerned he’s as responsible as any doctor who does something wrong.”

Dr Moy said there was plenty of data about the vaccines’ safety, and “no real evidence” of major problems.

In Melbourne to visit the factory where 50 million doses of the AstraZeneca vaccine will be produced, Mr Morrison said the government had achieved its promises of starting the rollout in February, making locally manufactured doses ready in March and including GPs in the program.

But the key targets of having four million people immunised by April and access to at least one dose by October appear highly unlikely to be met.

More than 400,000 people have received the jab one month into the rollout.

Mr Morrison said Australia was among a handful of nations producing the AstraZeneca jab.

“This has been the big game changer that we’ve been working so long and so hard to secure for our country,” he told reporters.

“That is the small club we’re in and we’re leading that club. Of that small group of countries, we’re doing it the best.”

Senior health officials insist there is no need for Australia to rush because there is no “burning platform” like in Europe or the US where the virus is rampant.

Australia is weighing up sending more locally produced vaccines to Papua New Guinea, where a coronavirus nightmare is unfolding.

An Australian AUSMAT team is in PNG to provide an initial 8500 vaccine doses to frontline health workers and assess the country’s needs.