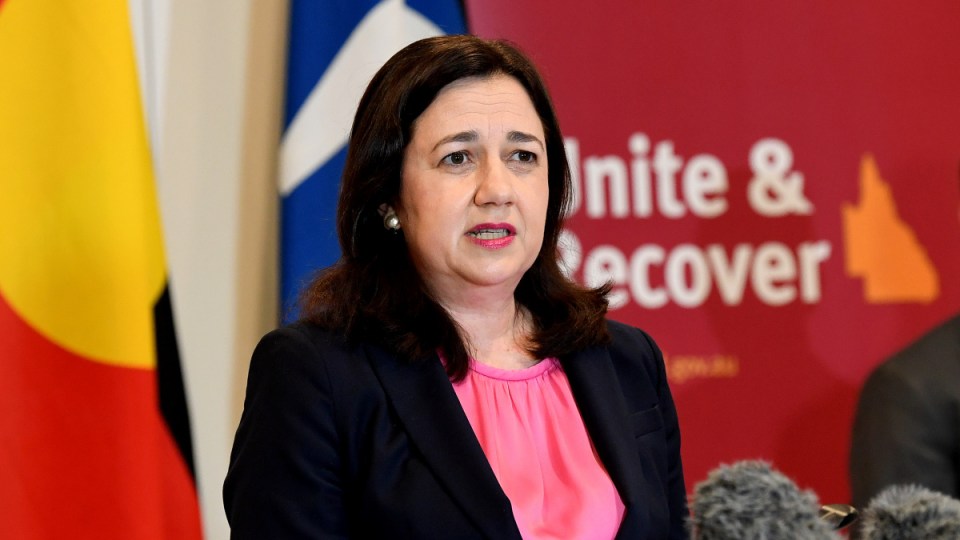 Premier Annastacia Palaszczuk has warned Queenslanders about complacency about the risks of transmitting the coronavirus, as a new mystery case was confirmed in Brisbane on Friday.

The Premier imposed a host of snap virus rules on Brisbane city and neighbouring Redcliffe after confirmation of the 26-year-old man’s infection on Friday.

“What we are going to ask is people in the Brisbane City Council areas and in Moreton Bay, is that if you are in crowded areas, to wear a mask,” Ms Palaszczuk said.

“If you’re going to a football match on the weekend, wear your mask going into the venue.

“If you are on a crowded train, put a mask on.

“These are the sensible precautions and we will be updating you over the weekend if there are any more cases.”

She said it was important that people abided by the restrictions this weekend.

Ms Palaszczuk said many people had become complacent about the risks of catching the virus.

“In the last week I have been to a couple of functions where there have been over 300 people and … people are not social distancing. We really need people to social distance,” she said.

“Everyone is doing handshakes again. Please, we’re still in the midst of a pandemic. Now is not the time to break our social good hand hygiene and the handshakes.

“We need to abide by these things if we are going to get through this.”

The man who was confirmed with the virus on Friday lives in the northern Brisbane suburb of Stafford. He had been in the community while infectious for up to a week.

The focused lockdown will only cover the Brisbane City and Moreton Bay council areas and people are also being urged to wear masks and socially distance.

“We wanted to let the public know as soon as possible,” Ms Palaszczuk said on Friday.

Chief health officer Jeannette Young said the man was being treated in Royal Brisbane and Women’s Hospital. His housemates are all self-isolating and getting tested.

The man visited a host of venues in between March 20-25.

They include Carindale Shopping Centre, Gasworks at Newstead and Mamma’s Italian Restaurant at Redcliffe. He also visited Bunnings, Aldi and Guzman y Gomez at Stafford.

The man was working as a landscaper on March 22 when he started having symptoms.

“Anyone who’s been to any of these venues during those specific time frames, I want you to come forward and get tested whether or not you’ve got symptoms, and to remain in isolation until you get a negative result,” Dr Young said.

“Everyone else who is anywhere in Brisbane or Moreton Bay, it’s really important, with any symptoms at all, please come forward to one of our many, many fever clinics and get yourself tested.”

The man visited Aldi at Stafford on the day he was tested for COVID-19 and before he received his result.

Dr Young brushed off concerns he had not followed health advice, saying he had “popped in” to the supermarket briefly.

She said it was too early to know how many people the man had come into contact with, but contact tracers were working with venues to track them down.

The person who spread the virus to him might also still be in the community while infectious.

Genomic testing is being done to determine if the man’s case is linked to an infection in a doctor at Brisbane’s Princess Alexandra Hospital two weeks ago.

The female doctor had worked a shift at the hospital and visited four venues in the city’s south while infectious.

In response, the government locked down hospitals, aged care facilities, prisons and disability providers for seven days to avoid a wider outbreak.

That lockdown ended only last Friday.

Dr Young said she thought it unlikely the latest case would lead to wider restrictions across Brisbane.

“It just depends what unfolds over the next 24 to 48 hours, but we need to get used to living with these virus,” she said.