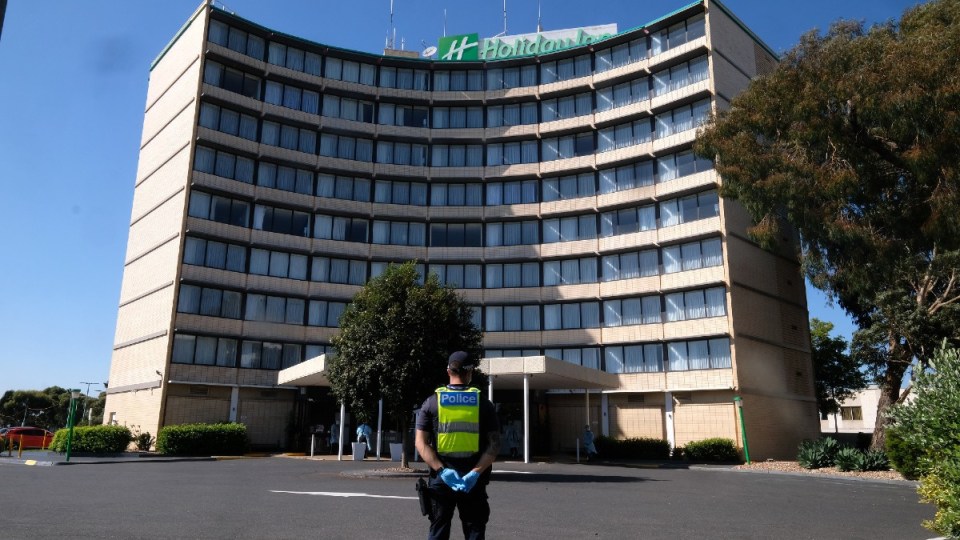 The Holiday Inn at Melbourne Airport – ground zero for February's outbreak – will be part of the refreshed program. Photo: AAP

International flights to Melbourne will resume after Easter, following major reviews of the state’s beleaguered hotel quarantine system, with airflow out of hotel rooms blamed for the leakage of the virus that caused Melbourne’s third lockdown.

There is also a renewed push to consider some form of home quarantine, and other quarantine options as part of managing the increased risk of contagion from new variants.

With more than 4000 quarantine workers having received their first dose of the vaccine, ventilation reviews in hotels underway and improved PPE rules rolled out, the government has determined it is safe to resume flights from April 8.

Initially, Victoria will take 800 passengers a week before increasing to 1120 people, once all ventilation assessments in hotels are completed.

Three hotels are ready to take passengers, while there is work to improve ventilation in other hotels.

“We’ve taken [the] action and time necessary to ensure we have the most rigorous quarantine system possible in place to protect against these highly infectious, rapidly changing variants of concern,” Acting Premier James Merlino said.

“The challenges of this virus will be with us for some time to come, that’s why we’ve listened to the advice of experts and made the necessary changes to ensure we’re keeping Victorians safe.”

The spread of the virus at hotels, including the Park Royal and Holiday Inn, has been blamed on the virus escaping rooms due to air pressure in hotel rooms changing when doors were opened, older rooms with poor seals and air-conditioning issues.

Ventilation is being upgrade to force air into rooms from the hallways rather than it leaking out.

The new rules will require N95 masks to be worn by anyone entering a “red zone”, which mirrors the rules in health hotels.

As reported by the ABC earlier in 2021, this was a recommendation of key health taskforces in 2020, but was ignored by the hotel quarantine program.

A review by deputy chief health officer Allen Cheng into the risks posed by new variants of the virus discusses the option of including a form of home quarantine as well as purpose-built quarantine facilities.

Home quarantine will require the agreement of national cabinet, which to date has rejected the idea.

A Safer Care Victoria review has recommended staff spend no longer than five minutes when in a guest’s room to conduct tests, which will now be carried out four times during the fortnight stay.

After the use of a nebuliser by a guest contributed to the spread of the virus, there will be additional screening measures for luggage.

The review found that the first time authorities became aware of the use of a nebuliser was on February 5 during a formal interview with the man, once he had tested positive.

He later told the media that he had told authorities when he entered the hotel that he needed the nebuliser.

The government, and experts, say it is not possible to completely eradicate the risk of spread from hotel quarantine, but say additional controls including vaccination, better ventilation and administration should reduce risk.

A review of the risks of new variants, including the British strain, recommended that all quarantine staff receive the vaccine and that ventilation assessments be completed in hospitals before flights can resume.

It has also recommended the Victorian government consider a permanent quarantine system. The government says it is looking at 10 sites, including Avalon and Tullamarine airports, for a purpose-built quarantine station, which could also be used for other emergencies such as housing people after a bushfire or flood.

The site would initially be designed for 250 residents a week. Design ideas include having single-storey self-contained units that have separate ventilation systems.