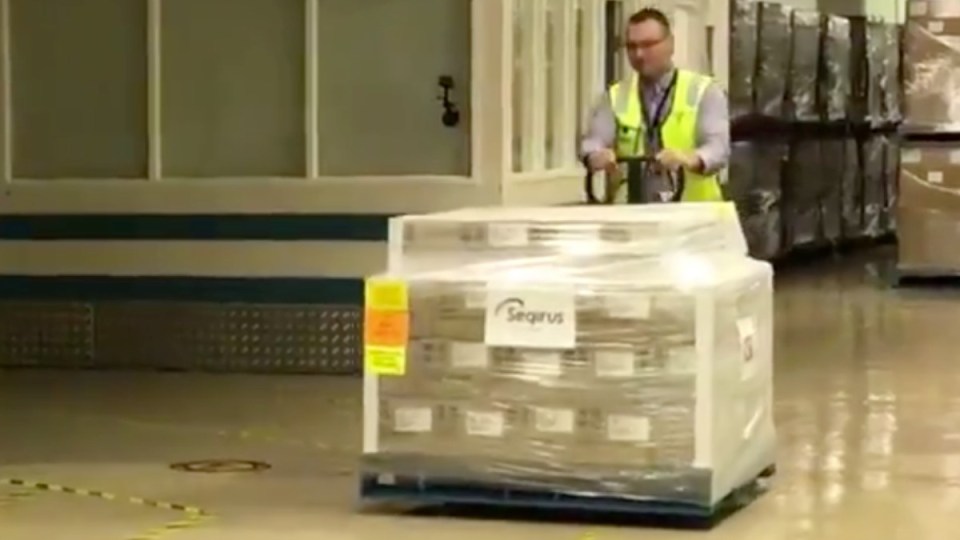 Australia has sent a million COVID doses to Pacific nations – with the goal of sending 15 million. Photo: Twitter

Australia is no longer reliant on insecure international supplies of coronavirus vaccines after the first locally made shots left a factory in Melbourne on Wednesday.

The first pallet-load of CSL-produced AstraZeneca shots were shipping out of the company’s Melbourne factory hours after the national medical regulator approved locally made doses late on Tuesday.

About 500,000 doses will leave the plan each week as the national vaccine rollout steps up.

Health Minister Greg Hunt declared “the trucks are rolling” as the locally produced vaccines were readied for dispatch across the country.

“This provides the security of supply for the Australian general population rollout, which is fundamental,” he said in Canberra on Wednesday.

Mr Hunt said the European Union had put some in place some “very challenging” hurdles to getting supplies to Australia.

“But we are in a strong position because of this Australian production.”

Appearing before a Senate estimates hearing, Department of Health secretary Brendan Murphy admitted the European Union had blocked more than one shipment of coronavirus vaccines.

AstraZeneca has been trying to get much more to Australia but has been unable to deliver.

“There have been various attempts to make additional shipments,” Professor Murphy told the committee.

“We have no expectation that we will get the additional international AstraZeneca any time soon.”

However, another 159,000 doses of Pfizer vaccines have arrived in Australia.

More than 312,000 people have now been vaccinated nationwide.

A group of Indigenous leaders and politicians received their first jabs in Canberra on Wednesday as medical officers prepare to visit remote communities across the countries.

Mr Hunt said Australia remained on track for everyone to get a first dose of the vaccine by October.

The government is also looking to expand production through CSL, potentially beyond one million doses a week.

But the company is not at that level yet.

So far 62,000 people within the aged care sector have received the vaccine, including 4600 in the past 24 hours.

Phase 1b will see six million Australians get their jabs.

The program takes in everyone over the age of 70, along with Indigenous Australians over 55 and younger adults with a medical condition or disability.

Mr Hunt said talks with European countries were also continuing about the request for vaccines for Papua New Guinea.

He said there were “other irons in the fire” to help address the health crisis in PNG.

Australian medical officers have taken more than 8000 doses of vaccines to PNG to inoculate health workers.

It’s expected more help for PNG will be pledged once the Australian team reports back to the government.