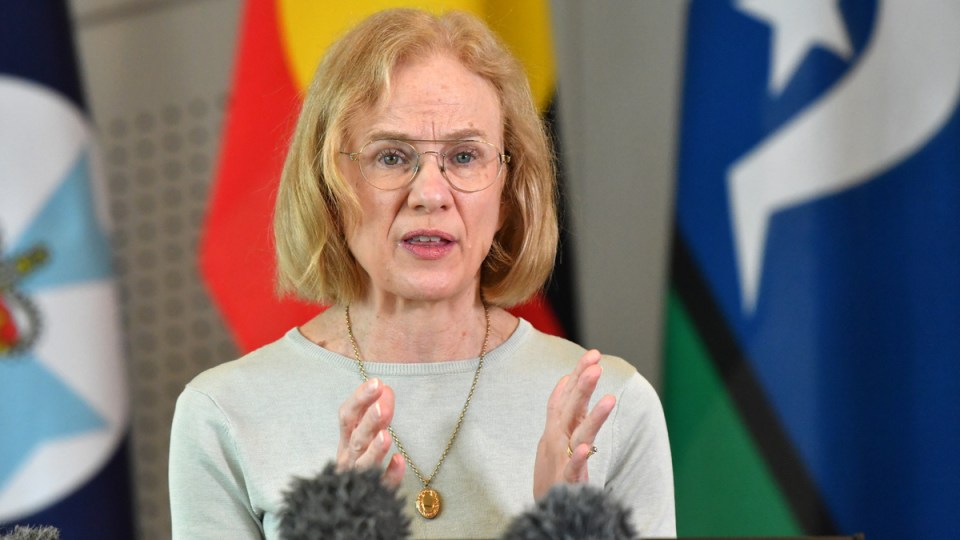 Q;ld's Jeannette Young said she was confident Queenslanders knew what to do to help stop COVID outbreaks.

Brisbane residents and businesses won’t be locked down again if there’s another coronavirus outbreak in the city.

Queensland chief health officer Jeannette Young said authorities would lock down only the most vulnerable people in future.

She said a focused lockdown of Brisbane’s hospitals, aged care homes, prisons and disability services had stopped the spread after a doctor became infected last week.

Those facilities reopened at noon on Friday after the state went eight days without a new case in the community.

“I hope people plan on going and visiting their loved ones in aged care, their family in our prisons, those people in disability services, and hospitals,” Dr Young said.

Dr Young said after 12 months of practice throughout the pandemic everyone knew exactly how to respond to outbreaks.

People and venues were habitually using contact-tracing apps, meaning close contacts of virus cases could be rapidly tracked as well.

She said the success of the focused lockdown meant there would not be another city-wide lockdown of Brisbane residents.

“Absolutely, there’s no need to go into lockdown when we’ve got responses like this,” Dr Young said.

The lockdown began on Saturday after the doctor tested positive on March 11.

The woman had worked at Princess Alexandra Hospital and visited four venues in the city’s south the previous day.

Dr Young said the woman, who wasn’t vaccinated, had followed strict protocols on wearing PPE and interacting with COVID-19 patients.

“I think it’s a wicked virus, I genuinely do,” she said.

“This is the virus that’s the problem, it’s not any human behaviour, it’s not what anyone’s done.

“I think people have done absolutely everything they possibly could.”

The doctor was infected by a patient who also spread the virus to another guest staying in a separate room at Brisbane’s Grand Chancellor quarantine hotel.

Dr Young said the hotel pair were staying in rooms at opposite ends of the corridor on level one.

An analysis of CCTV found no quarantine breach occurred at the Grand Chancellor.

The chief health officer believes the virus was spread into the air in the hallway by people simply opening their room doors to collect meals.

“I cannot see that there’s been any [other] way of transmission,” Dr Young said.

She said guests would be allowed to return to the hotel and the floor would be deep cleaned once all the guests on level one had completed their quarantine.

Premier Annastacia Palaszczuk said the vaccine rollout would be expanded in the Torres Strait Islands amid concerns about COVID-19 in Papua New Guinea.

She said the number of cases arriving from there was putting strain on hospitals. Nine new virus cases were reported in Queensland hotel quarantine on Friday.

“We’re moving people into hospitals, OK, but there might come a time where that is going to prove difficult,” Ms Palaszczuk said.