Heartbreaking images reveal the state of life in the United States and the United Kingdom as the two countries continue their uphill battles against the coronavirus pandemic.

A year after COVID-19 claimed its first American life – a Washington State man in his 50s – the nation’s coronavirus death toll has surpassed 500,000.

And it’s going to get a lot worse, according to grim predictions by the University of Washington.

The researchers suggest more than 589,000 Americans will be dead by June 21 – despite the nation’s vaccine rollout starting in mid-December. 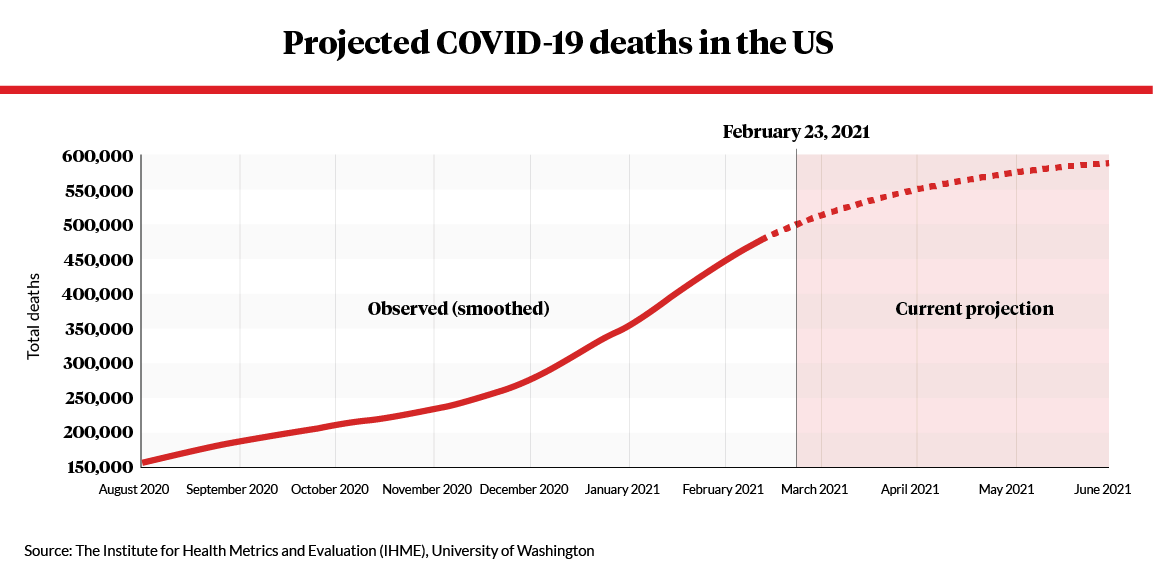 Meanwhile in Britain, the population must endure coronavirus restrictions for at least another four months in a bid to contain a highly contagious strain of the virus, known as the B117 variant.

On Monday, British Prime Minister Boris Johnson outlined a roadmap out of national lockdown, which has been in place since January 2.

Under the plan, the stay-at-home order is due to end on March 29, with the final step seeing most restrictions lifted by June 21.

It’s a world away from life in Australia and serves as an important reminder of how far we’ve come in our fight against the virus.

The sad story behind a mariachi band

It was an unusual sight last week in the US state of California, when a mariachi band began playing in a near-empty hospital car park.

Onlookers near St Jude Medical Center may have wondered who the band was playing for, as crowds were nowhere to be seen.

The answer to that was lying in hospital.

At the time, coronavirus patient Joseph Trejo, 53, had been hooked up to a ventilator for 11 days inside St Jude’s intensive care unit, unable to talk to wife Patty and their three sons.

Then, on Monday last week, he heard a familiar sound.

A mariachi band was playing he and his wife’s favourite song, ‘La Mano de Dios’ (The Hand of God).

Patty squeezed his hand as a nurse displayed the musical scene unfolding in the hospital car park on a smartphone.