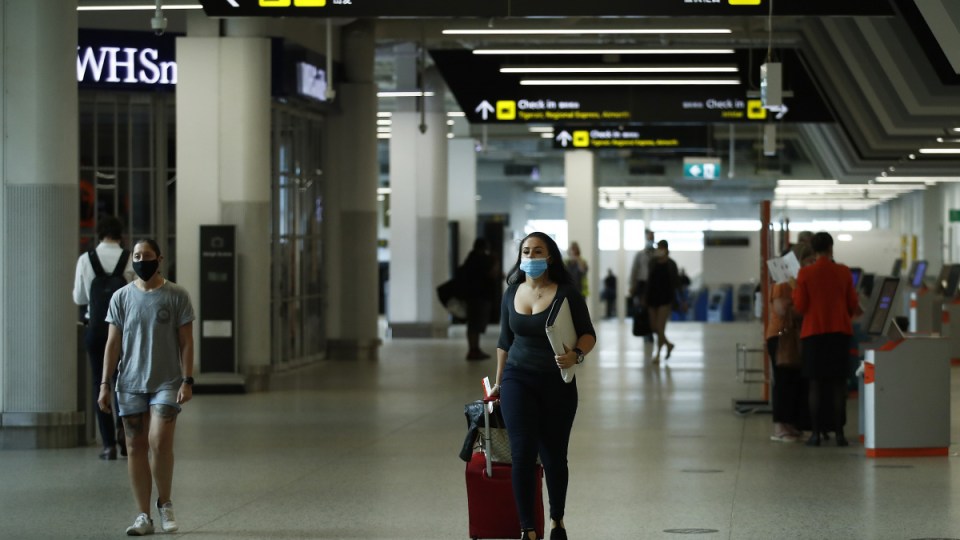 Victoria has paused international arrivals as the state battles a coronavirus outbreak with a five-day lockdown. Photo: Getty

A push for a national debate over whether to bar the 40,000 Australians stuck overseas from returning home unless they have a compassionate exemption has left some in despair.

The lockdown was prompted a hotel quarantine outbreak of the highly infectious B117 coronavirus variant, which originated in the United Kingdom and is now responsible for 75 per cent of cases in Victoria’s hotel quarantine.

“The game has changed” due to the “hyper-infectious” B117 variant of SARS-CoV-2 and the nation must have a “cold, hard discussion” on how to keep it out of Australia, Mr Andrews said.

“With this UK strain – and we haven’t even got on to South Africa yet, because it’s just as bad – should we be halving the total number of people coming home? Or should it be a much smaller program that’s based on compassionate grounds?” he said.

“That’s a conversation we should have, particularly given that we’re so close to being able to vaccinate those who, if they get this, will become gravely ill.”

Mr Andrews has temporarily paused flights into Victoria as the state attempts to control the outbreak.

“It’s not instantaneous because flights are already in the air, and people are well and truly on their way to coming home. They may be in transit, they may be in Singapore or another place, all those issues,” he said.

But the ban will make it harder for Australians stranded overseas to get home, and many are worried flights into Victoria will permanently disappear.

Melburnian Nancy Butterworth is stuck in London and struggling to come home.

The 31-year-old has a ticket booked to Melbourne for May, and she’s worried if flights get stopped she won’t get back in.

“I got off the phone with my parents and had a huge cry,” Mrs Butterwoth said about watching Mr Andrew’s press conference on Friday.

“I’ve got a flight booked in May because that is when the price is coming down. I would have liked to go earlier but I can’t afford it. I’m paying $3500,” she said.

The deteriorating situation in the UK has taken its toll on her mental health, and Mrs Butterworth is now so desperate to get home she will leave her British husband in London.

“I feel so vulnerable. I thought it was just ironic when Dan Andrews was talking about compassionate grounds,” she said.

“You shouldn’t be prioritising the tennis, it’s wrong on so many levels.”

Over in Delhi, Kunal, who only wanted is first name used, has been stuck with his young family for a year. He visited his mother, who was very unwell last February, and they went into a strict lockdown.

He has not been able to get home since, resulting in both him and his wife losing their jobs in Australia while they were in lockdown in India.

“His government is all about money,” said of Mr Andrews.

“They are happy to invite 1100 Australian Open players and staff members and not its own citizens,” he said.

“If they were too worried about this virus and it’s spread they wouldn’t have gone ahead with these events in the first place.”

Since he has been locked out of Australia, Kunal has had a baby girl and the family of four have not been able to afford the commercial flights back home.

“There are travel agents helping people, but it will cost me too much,” he said.

“I’ve been out of work for one year, trying to survive. If I pay for flights of my family and then hotel quarantine, it could easily cost between 20 and 30 grand.”

Kunal said that when he heard flights into Victoria might be cut back to compassionate cases he felt “disappointed’.

“I’ve lived in Melbourne for 17 years, I’ve paid my taxes, I’m a clean man, and this is how you get treated?”

Mr Andrews said he would push national cabinet for a review of the hotel quarantine system but that it would be for the federal government to decide how many people are returning to Australia.

His comments are at odds with the federal Labor Party, which has kept up a sustained attack on the government for not increasing the caps to allow everyone back in urgently.

“It’s a despicable plan, a callous, and cold-hearted one,” he told the ABC on Saturday.

“There are Australians who have been desperate to get back into the country, but have had flights cancelled all over the place. They have a right to come home.”

Who should manage hotel quarantine?

There is growing debate over whether federal or state and territory governments should be responsible for the hotel quarantine system.

While the Australian Medical Association declared Victoria “cannot be trusted” to manage hotel quarantine, Prime Minister Scott Morrison has said it’s not a federal responsibility despite the Opposition pointing the finger at him.

When asked about the situation on Saturday, Australia’s Chief Medical Officer Paul Kelly said the Australian government has a responsibility to vulnerable citizens overseas but stressed that hotel quarantine “has really been run in the states and territories”.

“The Australian government does have a responsibility to Australians overseas and for those who are vulnerable and really desperate to
come home,” Professor Kelly said.

“We need to … factor that in and to make it as safe as possible in terms of the virus transmission to the wider community, is certainly something we are absolutely focused on.”

The federal government has resisted a push from Queensland Premier Annastacia Palaszczuk to move quarantine to regional areas and last week national cabinet agreed to raise the international arrival cap.

The Northern Territory takes arrivals at the federal government’s Howard Springs quarantine facility, which is not included in the caps.

But Howard Springs has only hosted 3,700 quarantined Australians since October 23, 2020, according to the federal government.

This number is well below the full capacity, which is roughly 6,500 since October 23.

Labor victory fires up Tamil family’s hopes of return to their Biloela home
Perth residents urged to play it safe as massive storm rolls across region
Joe Biden says he’s not fussed by North Korea’s rumoured return to nuclear tests
ACTU hails Labor’s triumph as the first step to pay raises
Analyst: Sharemarket will be anxious about a Labor pact with Greens
French foreign minister hails defeat of Morrison and his ‘notorious incompetence’
Vic quarantine chief denies there is ‘any evidence’ her team knew about Holiday Inn nebuliser
Today's Stories