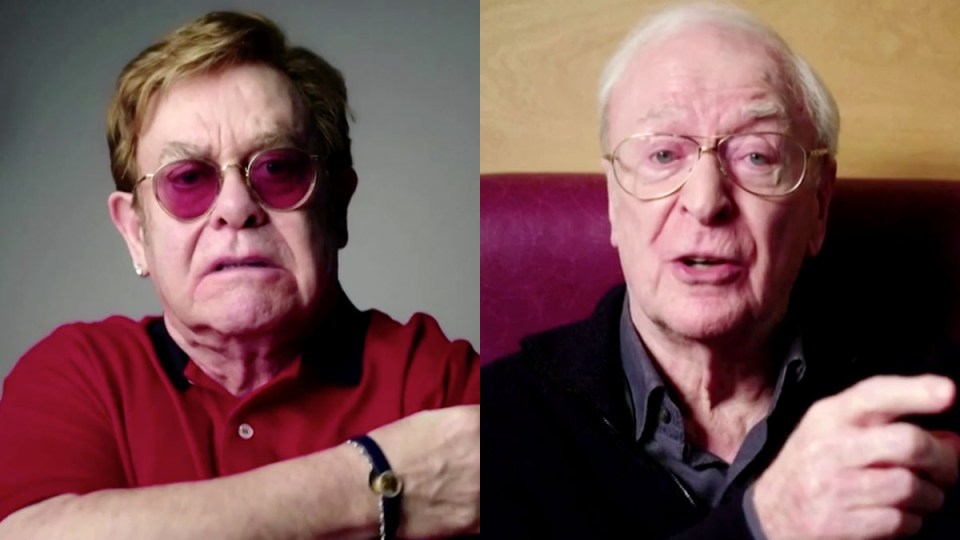 A couple of knights: Elton John and Michael Caine as they appear in the NHS ad.

Sir Elton John and Sir Michael Caine have fronted an ad for Britain’s National Health Service, urging people to get vaccinated against COVID-19.

The tongue-in-cheek video comes as Britain prepares to widen its rollout to younger adults.

The ad features the singer and the actor in apparent auditions for a campaign to reassure the public that coronavirus vaccines are safe and effective.

Both John, who is 73, and 87-year-old Caine have already had their virus jabs.

In the ad, the director asks John to deliver his lines with a bit less (and then more) “showbiz”. The Candle in the Wind singer is also encouraged to show off his impression of Caine – which he does surprisingly well.

More seriously, John then says: “The more people in society who get vaccinated, the more chance there is of eradicating the national COVID pandemic.”

He tells viewers that virus jabs “have all been through and met the necessary safety and quality standards”.

He then pretends to get a shot in his arm before bursting into an unconvincing rendition of his 1983 hit, I’m Still Standing.

The seemingly underwhelmed director thanks him and says, “We will let you know”, to which Sir Elton retorts: “Well, at this short notice you won’t find anyone bigger”.

The ad then cuts to Caine, who delivers two of his most famous lines.

“Hello, my name is Michael Caine,” he says.

“I’ve just had a vaccine for COVID. It didn’t hurt – not many people know that.”

The NHS ad ends with the director thanking Caine for his audition.

“Let the little fella [John] know he didn’t get the job,” the director says.

Britain has already given more than 12 million people at least one dose of the coronavirus jab, including everyone older than 70, front-line staff and healthcare workers. The new NHS ad is part of wider effort to counter cynicism or suspicion towards vaccine rollout as the program widens.

John said he was keen to film the campaign “to help show people the benefits of getting vaccinated and how it helps protect ourselves and the people we love”.

“I hope we can all come together and do our bit in the fight against this wretched disease,” he said.

The British government has pledged to offer a COVID vaccine to everyone in its four highest-risk groups by mid-February.

NHS Enland chief executive Simon Stevens said the vaccine uptake in older populations had been very high, and that the campaign was a way to encourage others who could get vaccinated to do so.

“Well over nine out of 10 people aged 75 and over have already taken up the offer of their NHS COVID vaccination, and now we want to encourage everyone in the high priority groups to do so,” he told CNN.