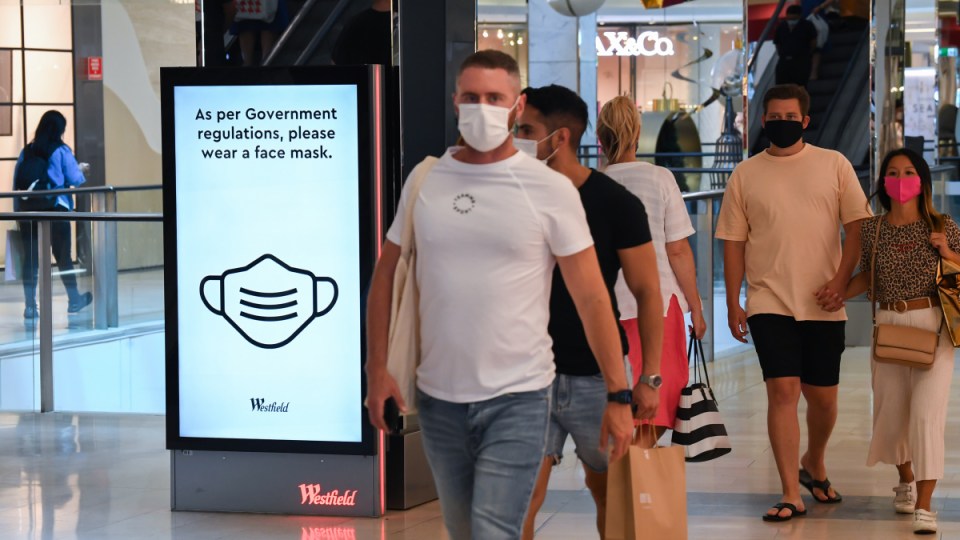 Shoppers will no longer need to wear masks in Sydney from Friday. Photo: Getty

NSW will ease a host of restrictions on indoor and outdoor gatherings, plus scrap compulsory face masks in shops, as it notches up 10 consecutive days without a new local COVID-19 case.

The state had zero local COVID-19 cases in the 24 hours to 8pm on Tuesday, as well as two cases in travellers in hotel quarantine.

The announcement came as chief health officer Kerry Chant said the coronavirus might have already been eliminated in NSW.

“But it is too premature to say we’ve got there yet,” she said.

“It may be in two weeks’ time we look back and say: ‘Well, actually, at this point in time we probably had’.”

On Wednesday afternoon, Premier Gladys Berejiklian announced that gathering and function restrictions would ease from Friday.

NSW residents will be able to invite up to 30 people inside their homes, while picnics and other outdoor gatherings – including in yards – will be capped at 50 people.

Attendee caps at weddings and funerals will lift to 300 people, while caps will be removed altogether for corporate events, religious gatherings and hospitality venues. However, the “four square metre” rule will still apply.

“The other cycle will be completed in about two weeks, after which time we can make sure that we’ve ticked all health boxes and we revert back to two square metres.”

Ms Berejiklian said that restriction might be revised in a fortnight – as long as virus infections stay at zero or very few.

“We have the most robust quarantine system in Australia but we know that there’s no such thing as a perfect system, and the risk of an outbreak is there,” she said.

“We need to make sure that if one does occur, that we don’t create a super-spreading event.”

Rules on mask usage around greater Sydney will also change, with usage no longer mandatory inside shops.

However, residents will continue to be obliged to wear a mask on public transport, at religious gatherings, in gaming rooms and while working in public-facing roles in hospitality venues.

Ms Berejiklian said masks on public transport would be important to coax Sydney CBD workers back to office work.

“In relation to the public, we recommend a mask when you can’t guarantee social distancing. But it will not be compulsory if you’re going retail shopping or if you’re a retail worker or obviously if you’re attending a hospitality venue,” she said.

Current rules dictate that masks are compulsory indoors in greater Sydney, the Central Coast and Wollongong, while five visitors are allowed in homes and a maximum of 30 people can gather outside.

NSW Health, meanwhile, is urging people in south-west Sydney to monitor for COVID-19 symptoms after virus fragments were detected in sewage at the Liverpool waste treatment plant.

It has also called for higher COVID-19 testing rates, with fewer than 10,000 tests recorded in NSW in the 24 hours to 8pm on Tuesday.

“The continuing low testing numbers is a concern as the virus may still be circulating in the community,” Dr Jeremy McAnulty said.

Meanwhile, South Australia remains on track to lift coronavirus restrictions with Sydney this weekend, ending what has been a “huge imposition”, Premier Steven Marshall said.

The measures prevent people from greater Sydney, the Central Coast and Wollongong from entering SA and have been in place since the COVID-19 outbreak in the city’s northern beaches area.

“They’ve been doing very well and we’re on track to open up to Sydney,” Mr Marshall said on Wednesday.

“But we still want to see those final few days with no community transmission.”

Victoria still has Sydney’s Cumberland LGA as a designated red zone – meaning travel is banned. It is yet to make announcements about any changes to border rules.