New Zealand has been heralded as the gold standard of national responses to COVID-19, while Trump’s America has ranked last as deaths in the US near 330,000.

In the survey, conducted by consultancy firm Brand Finance, 75,000 members of the public and 750 people from targeted audiences were asked to evaluate 105 nations’ response to the pandemic.

They were asked to rate the nation’s ability to stimulate the economy, protect the health and wellbeing of citizens, as well as co-operate on the international stage and provide aid.

New Zealand, where community transmission of COVID-19 has effectively been eliminated, was ranked No.1 with a net score of 43 per cent.

Prime Minister Jacinda Ardern’s decisive response, comprising of hard and fast lockdowns and clear communication about what needed to be done, has been admired around the world.

As a result, the island nation has recorded only 25 deaths and fewer than 1030 cases. 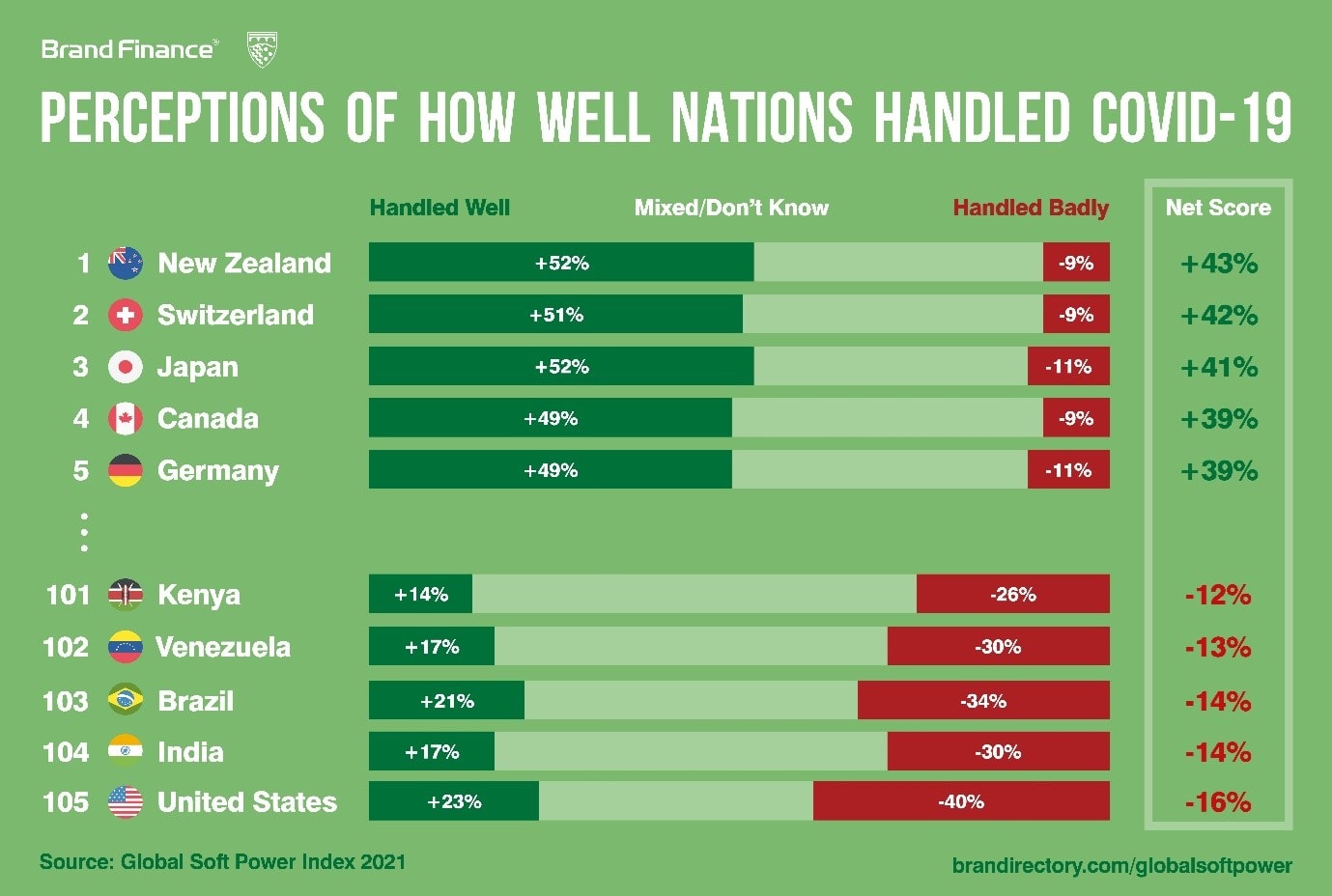 Compare that to the US, where more than 320,000 people have died from COVID-19 and at least 18.2 million people have been infected.

It’s no wonder respondents ranked the US last (-16 per cent).

About 3000 Americans are dying every day in a worrying trend that health experts predict will last for two or three months.

Australia, meanwhile, was ranked 11th with a strong net score of 37 per cent.

However, a new cluster in Sydney threatens to disrupt our winning streak.

Although the survey’s respondents praised affluent countries like NZ and Switzerland, proper credit was not given to Vietnam in South-East Asia.

Vietnam was ranked 59th with a net score of just 8 per cent, despite the nation recording only 35 deaths and fewer than 1500 cases.

Its track record is all the more impressive given Vietnam shares a border with China, where the coronavirus emerged in December last year.

Another country that did not get the recognition it deserved was Slovakia, which was ranked 71st with a net score of just five per cent.

Right up until September, Slovakia had recorded relatively few infections.

That was until a fresh bout of coronavirus cases suddenly started to appear after summer.

To get on top of its second wave, the Slovakian government rolled out an ambitious mass testing program that aimed to test its entire adult population for SARS-CoV-2.

Thousands of testing sites have since been set up across the country, with everyone aged 10 and over —approximately four million people—asked to attend a testing site and take an antigen test.

After being tested, people must wait in a separate disinfected room until they are given their results about half an hour later.

Though some health experts have criticised the program’s implementation, supporters of mass testing in other countries have pointed to Slovakia as an example of how to respond to outbreaks.

Downfalls in the West

Western powerhouses who received low scores included France (15 per cent), the United Kingdom (14 per cent), Spain (4 per cent) and Italy (-1 per cent).

In the UK, where the British government let COVID-19 rip through the population, a new highly infectious virus strain has emerged that has disrupted crucial supply chains and further crippled the nation’s economy.

On the other end of the spectrum, countries like Switzerland, Japan, Canada, Norway, Singapore, Denmark, South Korea, Australia, Austria and Sweden all received strong scores for their COVID response.

Sweden was ranked 13th with a net score of 35 per cent – a surprising result given the intense criticism lumped on Sweden for its decision to snub lockdowns in favour of keeping its economy open.

Planning a picnic? This online tool shows where your travel bubble overlaps with friends

The countries that surprised, shocked and worried us during the pandemic

NSW kids can socialise in bubble of three during school holidays

PM lands in New York ahead of packed itinerary

US to allow in fully-vaccinated travellers

Planning a picnic? This online tool shows where your travel bubble overlaps with friends

Which federal MP is spending the most on Facebook advertising? (Hint: It is not Craig Kelly)

Aussies are spending $21.9 billion on pets. These are the hidden costs