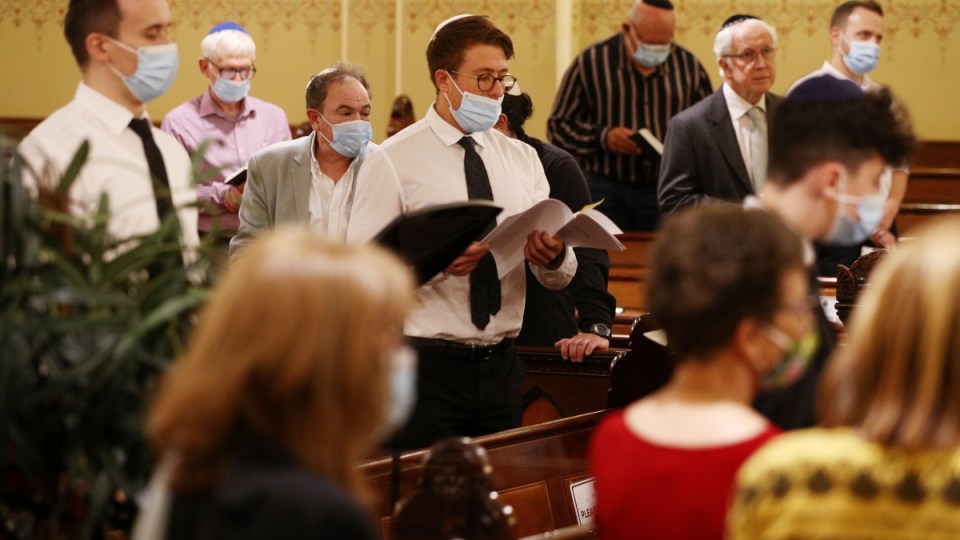 The lighting of the menorah at The Great Synagogue in Sydney last Friday – religious ceremonies are now allowed bigger numbers. Photo: Getty

Victoria notched its 46th day in a row without community transmission of the virus on Tuesday, while NSW chalked up its 11th.

South Australia also confirmed it had no new infections.

There were five more infections in returned overseas travellers in hotel quarantine in NSW. Western Australia also confirmed another case in hotel quarantine – a young man who is a guardian for his brother, who had already been diagnosed with the virus.

The two-visitor limit for NSW aged care residents was lifted on Tuesday, in time for the holiday season. Christmas concerts and carols are also now allowed.

Visits from musicians had been banned since the early days of the pandemic in March.

“I know how heartbreaking and heart wrenching it’s been for families who haven’t been able to go and visit their loved ones in the way that they’d like to in aged care facilities,” Ms Berejiklian told ABC TV on Tuesday.

“I’m really pleased …. that it is now OK to do that, especially leading up to this time of year. It helps to reduce a bit of the stress that everybody has been experiencing this year,” she said.

NSW has been easing restrictions incrementally ahead of Christmas. Ms Berejiklian said there would be no more regulations relaxed before January 1.

“I think what we’ve got is a really good sweet spot in NSW where we’re keeping the virus at bay and people are going to have a relatively restriction-free Christmas,” she told Nine’s Today show.

“I don’t know many people who have more than 50 people at their home for Christmas,” she said.

NSW had also eased restrictions for people who want to eat at restaurants, and cafes with one customer per two square metres allowed while up to 100 people are allowed at outdoor gatherings, including in backyards.

“I’m really hopeful that everybody will stay vigilant, that we won’t get too complacent,” Ms Berejiklian said.

With people able to travel freely around the country, everyone had to be on their guard, she said.

“Now that we’ve got those eased [border] restrictions and we can look forward to a better summer than we’ve experienced in the past few months, but it doesn’t mean we’re out of the woods, far from it,” she said.

“Testing numbers remain low, which is a concern,” it said in a statement.

“There is no room for complacency with restrictions eased, borders having opened, and school holidays and Christmas being less than two weeks away.”

Victoria’s figures on Tuesday came from 8296 tests, while there were 1587 in South Australia.