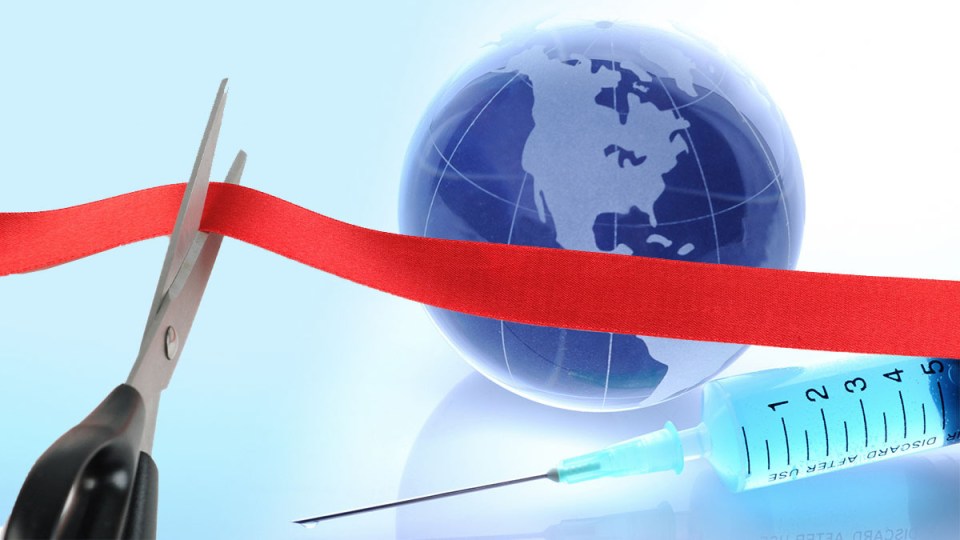 Countries are racing to vaccinate their populations from COVID-19 as soon as possible. Photo: TND/Getty

It’s the good news we all needed to hear.

Promising data now shows not one, but two US-developed vaccines are very effective in protecting people against COVID-19.

On Monday night, Moderna Inc announced its experimental vaccine was 94.5 per cent effective based on interim data from a late-stage trial.

It is preparing to seek approvals in the US within weeks.

The medical breakthrough came one week after Pfizer’s announcement that its vaccine was more than 90 per cent effective.

It’s one of four vaccine deals that Australia has, for a total of nearly 135 million doses.

Each would require two jabs, if officially approved.

If all goes well and the Moderna and Pfizer vaccines pass safety regulations, the US could have two vaccines authorised for emergency use next month, with as many as 60 million doses available in 2020.

There is, however, more work to be done to ensure the vaccines are safe and effective.

Even then, it will take months for the vaccines to be distributed widely.

What happened in Moderna’s trial?

The trial involved 30,000 people in the US, with a quarter of participants aged 65 years or older.

Half of them were given two doses of the vaccine, four weeks apart, while the rest had placebos.

No one knew who got what.

Over time, some of the volunteers became infected with COVID-19.

Of the first 95 people to develop symptoms, 90 per cent had been given the placebo, and only five had received the vaccine.

Based on that data, the board estimated the vaccine was 94.5 per cent effective.

The data, which has not been peer reviewed, also shows there were 11 cases of severe coronavirus in the trial, but none happened in people who were immunised.

Were there side effects?

Nothing serious, though no medication is 100 per cent safe.

The main side effects reported by some patients were pain at the site of injection, fatigue, muscle or joint aches, and a headache.

These symptoms seemed to occur more frequently after the second dose.

“These effects are what we would expect with a vaccine that is working and inducing a good immune response,” said Professor Peter Openshaw, from Imperial College London.

How does the vaccine work?

Both the Moderna and Pfizer vaccines are mRNA vaccines that target the coronavirus’s spike protein (the part that latches onto our human cells and infects us).

Unlike other conventional vaccines, RNA vaccines work by introducing a special molecule (known as an mRNA sequence) coded with instructions.

Like a mini Ikea assembly manual, this special molecule teaches our cells how to build a disease-specific antigen.

Antigens send an alarm to our immune system that alerts it to a disease, in this case SARS-CoV-2.

Once these antigens are produced within our body, our immune system learns to recognise them and prepares to fight the real thing if it enters our body.

“If mRNA vaccines against COVID-19 gain regulatory approval, this will be a huge validation of the RNA vaccine production platform technology.”

What are the problems with an mRNA vaccine?

Unfortunately, some mRNA vaccines must be stored at very low temperatures.

This is a problem for the Pfizer vaccine in particular, which needs to be stored in temperatures as low as -70 degrees Celsius.

Transporting doses to Australia is going to be difficult, though not impossible.

Moderna, meanwhile, is in a better position.

Its vaccine can be shipped at -20 degrees – standard freezer temperature – and is stable at normal refrigerated temperatures for 30 days.

Do the vaccine trial results signal an end to the pandemic?

Most people will need to wait until at least March before an effective vaccine could become widely available.

If and when that happens, the pandemic could eventually shrink over time if most people are immunised.

But for now, we still don’t know if the Moderna vaccine stops people from becoming seriously ill with COVID-19, or if it prevents them from being infected in the first place.

Although protection against illness is good for an individual, it will not stop the virus from circulating in the community, nor prevent unvaccinated people from getting sick, said Dr Penny Ward, visiting professor in pharmaceutical medicine at King’s College, London.

How long will the coronavirus vaccine last?

Both Moderna and Pfizer started their trials on July 27, and so they have been able to follow their volunteers for only a few months.

The vaccines may provide long-lasting protection, or fade away within months and require a booster shot.

Moderna’s COVID vaccine: What you need to know