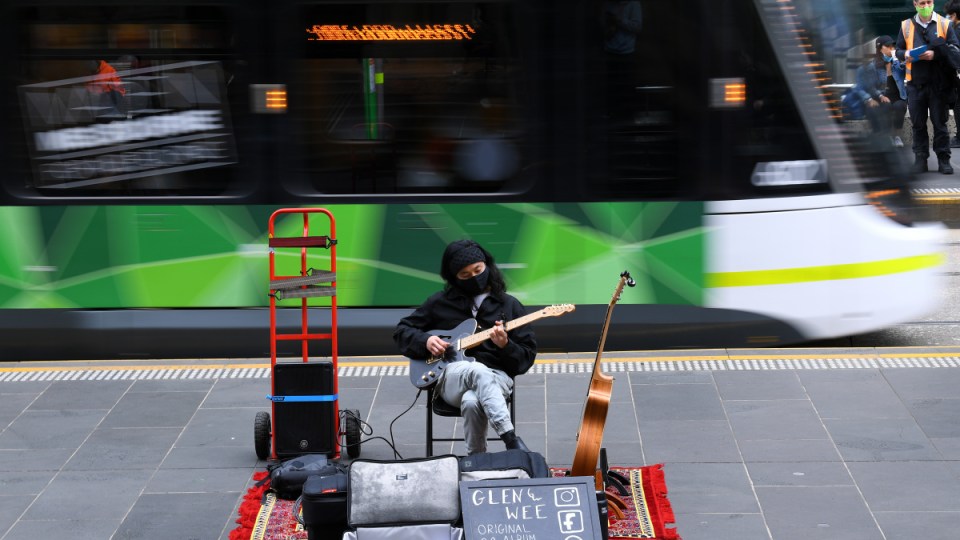 A busker in Melbourne's Bourke Street Mall, which is slowly returning to normal.

Victoria has posted a full fortnight with no new coronavirus infections or fatalities.

The state’s 14th day in a row without confirmed cases came as state borders were again expected to be high on the agenda at Friday’s national cabinet meeting.

Victoria has only three remaining active cases, and only one whose origin cannot be traced.

COVID cases have plummeted across the country in recent weeks. NSW also confirmed another day without community acquired infections on Thursday. It had only a single new infection in a returned traveller in hotel quarantine.

“What we have achieved is incredible,” federal Health Minister Greg Hunt said ahead of the NSW confirmation.

“Today the early advice that I have is that NSW is on track to have zero cases, matching what Victoria is doing. Australia may well be on track for another zero case day of community transmission.”

Amid the plunging numbers, Prime Minister Scott Morrison is set to advance plans to reopen Australia by Christmas.

Mr Morrison will chair Friday’s meeting, with a framework to further lift restrictions across the country at the top of the agenda.

The blueprint received in-principle support from premiers and chief ministers at the last meeting but has been criticised by doctors who warn it moves too fast.

“It represents a significant change in direction, sending a message to the community that will drive complacency,” Dr Khorshid said.

“Living with the threat of COVID-19 means that sensible restrictions must remain part of our lives for the foreseeable future.”

The Australian Industry Group, which represents some of the country’s biggest employers, says committing to reopening domestic borders is a crucial step toward the eventual easing of international travel restrictions.

“Our low case numbers and improved quarantine arrangements make it highly desirable for business and family connections that international travel should start to ramp up.

“However, it would be plainly embarrassing that a person from Singapore or Japan could travel to Queensland or Western Australia before a person from Victoria could set foot easily in those states.”

“He needs to bring people along on a process which sees our borders open up before the end of the year,” Mr Marles told the Nine Network.

The leaders will receive Chief Scientist Alan Finkel’s review of contact tracing systems around the country.

Vaccine distribution is also up for national cabinet discussion after Pfizer reported its candidate had a 90 per cent effectiveness rate in late-stage clinical trials.

Mr Morrison is expected to outline the federal government’s vaccine policy including the requirements for states and territories to assist with distributing vaccines when they are approved.

There have been four flights into the Northern Territory capital since a deal was struck to use a mining hub outside of Darwin for two-week quarantine periods.

“There is strong demand for the next four flights,” a Department of Foreign Affairs and Trade spokeswoman said.

National cabinet is also due to talk about the bushfire royal commission report and the National Federation Reform Council meeting in December.