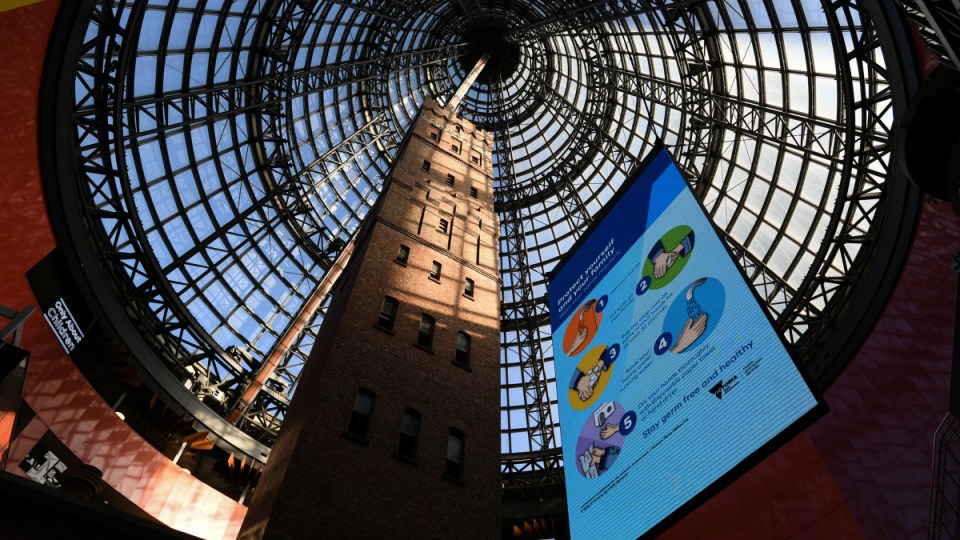 Health authorities in two states are on alert and warnings have been issued for a busy Melbourne shopping centre and the airport after a woman tested positive to the coronavirus.

The woman returned a positive result in South Australia after flying from Melbourne.

Victoria’s Department of Health and Human Services has issued hotspot alerts for Melbourne Central on November 8 and terminal four at Melbourne Airport on November 9 after being told of the positive test on Tuesday.

Health Minister Martin Foley said the positive result was most likely shedding from a previous infection.

“The laboratory results in South Australia require further investigation to form and reach that conclusion, so out of an abundance of caution, both jurisdictions have decided to align their public health advice,” Mr Foley said.

“South Australia and Victoria will work together to formally investigate that case.”

Anyone who visited the two places at those times and showed any virus symptoms should be tested, the minister said.

Mr Foley said two positive cases in Victoria on Tuesday were also most likely shedding and were under investigation.

“While these cases are not considered active out of an abundance of caution additional testing is being undertaken and individuals concerned will remain isolation, until those results are achieved,” he said.

Mr Foley spoke about the three potential cases on Wednesday after the DHHS had announced a 12th day for Victoria without any coronavirus deaths or new cases.

Other key numbers also remain steady, with four active cases in the state and one mystery case.

Testing numbers are staying robust, with 19,986 in the previous 24 hours.

Two people are in hospital and neither is in intensive care.

NSW also had no locally acquired infections on Wednesday, giving Australia its fourth day in a row without community transmission of the deadly virus.

NSW, which reported more than 20,000 tests in the preceding 24-hour period, had four more infections in returned travellers in hotel quarantine.

Tuesday was the first time since late February that the nation had gone three days without the virus spreading locally.

Australia is among a handful of countries that are performing well on managing the virus. Elsewhere, devastating fresh waves are sweeping the US and Europe, with the virus killing more than 1.2 million people and infecting 50 million.

Despite Australia’s positive progress, Prime Minister Scott Morrison has warned that complacency at home and risks from restarting international travel pose major challenges to keeping on top of the pandemic.

He said QR code registration, social distancing and other COVID-safe behaviours such as wearing masks on public transport needed to be enshrined in society.

“If we lose our commitment to that then we put ourselves at risk,” he said.

Elsewhere, Health Minister Greg Hunt made his most confident declaration yet that a coronavirus vaccine will be found after one candidate claimed a major breakthrough on Tuesday.

Pfizer has reported a 90 per cent effectiveness rate in late-stage clinical trials, sparking hopes there might be a path out of the nightmare pandemic.

Mr Hunt said discussions with the pharmaceutical giant’s Australian boss had boosted his hopes for a vaccine.

“The information internationally is very positive. There is more work to be done and we need more data to be certain,” he told parliament on Tuesday.

“I am more hopeful and more confident than ever.”

Australia has a deal for 10 million doses of the Pfizer vaccine and three other agreements with candidates also in development.

Australia’s coronavirus toll remains at 907, 819 of them in Victoria.