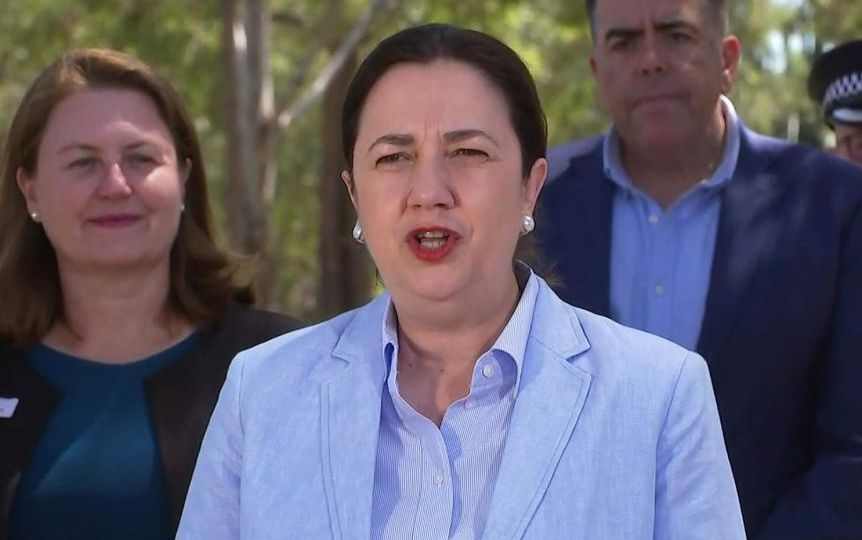 Premier Annastacia Palaszczuk says low coronavirus case numbers in Victoria are “very encouraging” and could mean Queensland will open its borders to the southern state before Christmas.

Victoria has recorded its seventh day in a row with no new coronavirus infections or deaths.

Ms Palaszczuk said she would be watching Victoria closely in coming weeks in regards to reopening the border before Christmas.

“We could if it continues with these really good results,” she said.

“But they’re coming out of lockdown, they’re not moving around freely like we are in Queensland, they’re not at that stage so one step at a time.

“We will always keep Queenslanders safe and, let me make it very clear, we will listen to the advice of [Chief Health Officer] Dr Jeannette Young.”

Ms Palaszczuk said she was not concerned about the Victorian border opening to NSW on November 23.

The Premier said the State Government would continue to take advice from Dr Young over any future border decisions with Victoria, which involved looking at COVID-19 hotspots and reviewing sewage testing results.

“This is a very distressing situation for many families,” Ms Palaszczuk said.

“But you can only open up when it’s safe so it’s going to be very, very important to look over the next few weeks as Victoria opens up more, and if there is any community transmission.

“And can I say from the early signs, it is very encouraging.”

Ms Palaszczuk remained firm on her stance that Queensland would review border restrictions at the end of the month.

“I think everybody knows our borders have actually protected Queenslanders.

“And you’ve actually got a High Court decision now today that actually proves putting in place those strong border measurers was constitutional.”

Ms Palaszczuk said there had been no discussion about closing the Queensland border to all of NSW at the end of the month.

“I’ve never said that – what I’m saying really clearly is we’ll take the advice of Dr Young,” she said.

“Our Chief Health Officer has stood Queensland in very good stead and we’ll be listening to her.”

Border controls in place ‘for some time’

Queensland police said the border pass system has been running smoothly, despite delays of up to 50 minutes during peak hours at road border crossings on the Gold Coast.

Deputy Commissioner Steve Gollschewski said it was a timely reminder for people to plan ahead if travelling and to have the correct border pass displayed clearly.

“Our border controls remain in play, they will for some time,” he said.
“People need to not assume they’re going away, so they need to get online and make sure they have the right paperwork before they come.

Deputy Commissioner Gollschewski said a new online border declaration pass system that would increase efficiency would be revealed next week.

“Since July 3, we have issued nearly 5.7 million border declaration passes – that tells you the volume of things we are dealing with,” he said.

“Overall it is working very effectively and in fact we’re seeing less people turned away and about the same going into quarantine.

“As of today, across Queensland we have 3627 persons in hotel quarantine, which is a pretty consistent number so we haven’t seen a huge spike in that.”

Queensland promises to consider inviting Victorians over for Christmas