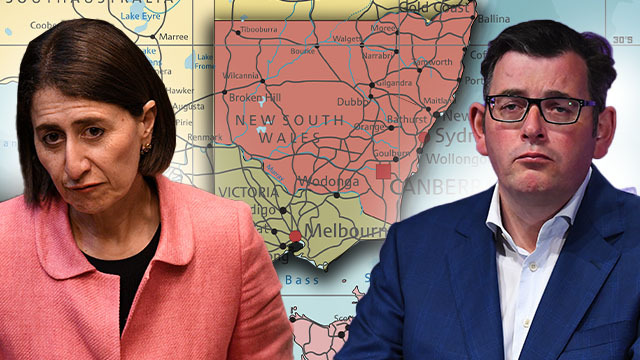 The NSW-Victoria border is harder to cross than the old Berlin Wall. Photo: TND

After months of isolation, Victorians will again be welcomed into New South Wales within weeks, after Premier Gladys Berejiklian announced a date for the border’s reopening.

The border between NSW and Victoria will reopen as of November 23, Ms Berejiklian confirmed on Wednesday.

Victorian Premier Daniel Andrews had earlier hinted that an announcement was imminent, telling reporters at Werribee Zoo that he had spoken to the NSW leader and expected good news.

Moments later, Ms Berejiklian tweeted: “On Monday, 23 November – the NSW/Victoria border will reopen. We need to keep moving forward as we live with COVID-19. I have confidence that everyone will continue to work hard to keep everyone safe.”

“Come a minute past midnight on November 23, there will be free movement between NSW and Victoria,” Ms Berejiklian said on Wednesday.

“Very proudly I say NSW will be the only jurisdiction in Australia that will be welcoming residents of all states, of all jurisdictions,” she told reporters.

The change was prompted in part by the failing of a southwest Sydney restaurant visited by a positive case to provide NSW Health with staffing and patronage records.

Jasmins1 Lebanese restaurant in Liverpool has been directed to close until NSW Health no longer considers it a public health risk.

All three were household contacts of known cases who were already isolating.

Meanwhile, Victoria clocked up its fifth consecutive day without any new COVID-19 cases.

The NSW-Victoria border reopening was exciting for many, but not entirely unexpected, as speculation over the continued hard border had been building as Victorians stamp out virus infections.

On Monday Ms Berejiklian said the border could come down in “weeks, not months”.

However, she said she remained nervous about the increased socialising that comes with the Christmas season and advised people to boycott any venue that didn’t comply with COVID-safe regulations.

“If you walk into a restaurant or a pub and they don’t have QR codes you shouldn’t really go in there,” she said.

Opening to the south – frosty in the north

Meanwhile, after months of back-and-forth between state premiers, the border between regional New South Wales and Queensland officially reopened on Tuesday.

Ms Berejiklian said she sent a text on Sunday congratulating the Queensland premier on her election victory, but it remained unacknowledged.

“I just congratulated her, I said ‘especially during a pandemic congratulations on your win and I would love to talk borders with you’,” Ms Berejiklian told Sydney radio Nova on Wednesday.

“I haven’t heard back yet … (but) I’ve had bigger disappointments in my life,” she said.

“But our Blues will reply tonight when we win against the Maroons,” she added, in reference to the State of Origin match.

Victorians could be welcome in South Australia

South Australia is set to relax its border with Victoria in about two weeks time, with the caveat that those entering will complete 14-day quarantine in a home environment, instead of in Adelaide’s so-called medi-hotels.

“We know this is great news for families especially in the lead-up to Christmas,” Mr Marshall said on Tuesday.

“Victoria is doing well and that’s giving us confidence that we can ease those restrictions.”