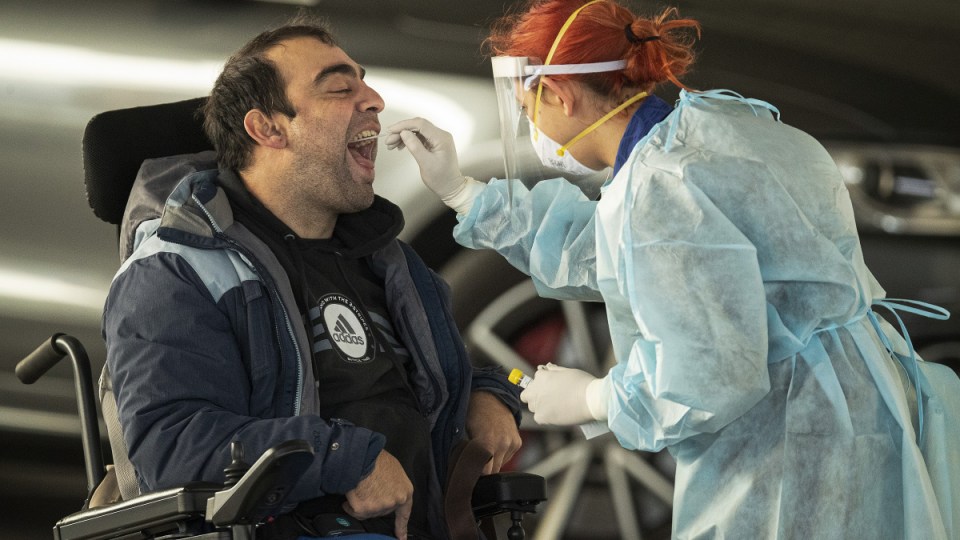 NSW authorities remain concerned there may be undetected transmission of the coronavirus in south-west Sydney, despite only one community COVID-19 case recorded on Monday.

Contact tracers are struggling to track down patrons who dined at a Sydney restaurant visited by a person infected with COVID-19.

The race to identify diners comes as Victoria recorded its third straight day of zero infections and as Queensland prepares to open its border to regional NSW.

A public health alert has been issued for patrons who visited Jasmins Lebanese Restaurant in Liverpool on October 25 for at least an hour between 2pm and 3.30pm.

Contact tracers have battled for days to find diners – who are considered close contacts and must isolate for 14 days – because the restaurant did not comply with the requirement to record the contact details of all patrons.

More than a week after the exposure, NSW Health is still searching for a handful of diners.

A frustrated Premier Gladys Berejiklian warned there is no excuse for non-compliance seven months after the pandemic was declared.

“You cannot rely on the one person who made a group booking – that’s not how it works.”

Chief health officer Kerry Chant also encouraged patrons to give their business to venues that had their safety in mind.

“If you have not been given a hygiene messages when you go in, if you’re not shown a QR code, if someone doesn’t prompt you to sign in – that is not the telling of … a good premises that actually cares about its patrons,” she said.

The case included in Monday’s numbers is a child who authorities believe acquired the virus at Flip Out Prestons Indoor Trampoline Park, as first reported on Sunday.

It is the second case linked to the venue.

The new case also attended Bambino’s Kindergarten in Horningsea Park on October 29 and 30.

Anyone who attended the kindergarten on those days or the trampoline park from 11am to 2pm on October 25 must get tested immediately and isolate for a full 14 days regardless of the result.

Ms Berejiklian also revealed she contacted newly elected Queensland Premier Annastacia Palaszczuk to congratulate her on her win and to request they talk about the ongoing border stoush between the states.

Queensland will open up to everyone bar those in Greater Sydney and Victoria from Tuesday, but Ms Berejiklian argues there is no reason Sydneysiders should be excluded.

“There isn’t a single place in Australia where New South Wales residents – all of us – should not be welcome,” she said.

She also confirmed NSW would allow travellers from Victoria to enter the state within a matter of weeks.

“I wouldn’t be surprised if we moved more quickly against Victoria than Queensland did against us.”

Six cases were also detected in returned overseas travellers in hotel quarantine on Monday, bringing the number of active cases in the state to 76.

Victoria, meanwhile, is celebrating a third straight COVID-free day after recording no new cases or deaths during the past 24 hours.

Zero new cases and no lost lives reported in the last 24 hours. The 14 day average is down to 1.9. There is 1 case with an unknown source. More info: https://t.co/eTputEZdhs#COVID19VicData pic.twitter.com/XG94AhLGzI

The figures bring metropolitan Melbourne’s 14-day rolling average ever closer to zero to 1.9, with only one mystery case still being investigated in the fortnight to October 30.

It was the fifth time there had been of so-called ‘double doughnut’ days during the past week.

The state also reported no new infections on Saturday, with an expert panel reclassifying one case as a false positive.

The state’s virus death toll remains at 819 and the national figure 907.