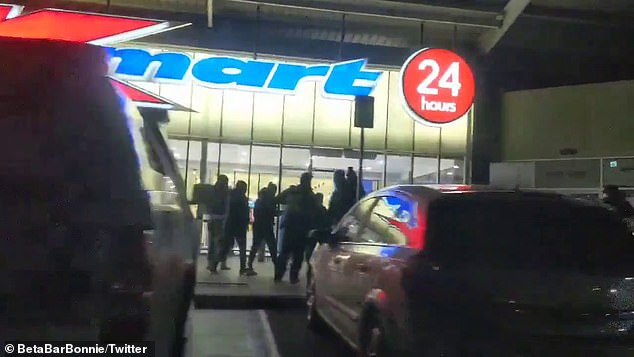 Deprived shoppers get their retail fix at a Kmart in Melbourne very early on Wednesday morning. Photo: Twitter

Premier Daniel Andrews has pleaded with Victorians to follow coronavirus rules, as crowds flocked to Melbourne shops and bars on Wednesday.

“If we all play a part in the next few weeks, then we hope there will be significant stability with these numbers, and the longer we can continue to be vigilant, the better the outcome,” Mr Andrews said.

There were widespread reports of lengthy queues at suburban shopping centres, pubs and restaurants late into Tuesday as Melburnians counted down to the end of their 15-week shutdown at 11.59pm.

Some fans queued outside city Kmarts, keen to be the first through the doors. That sparked anger, and fear, among other Melburnians that social distancing rules were being ignored.

The chain’s owner, Wesfarmers, has introduced a booking system for its Melbourne shops. Mr Andrews said management told him on Wednesday the system – which is “not the usual way to go to Kmart, but the safe way” – had been popular with shoppers.

There were two more COVID cases and two more fatalities in Victoria on Wednesday, bringing to an end a recent run of “double doughnut days” – days without additional infections and fatalities.

Both of the new infections are in close contacts of other cases. The latest patients were already in quarantine when diagnosed and posed no risk to public health, Mr Andrews said.

“Today is a positive day. To have just two more cases and have them contained … that means the system is working very well,” he said.

“There will be cases and outbreaks, but we will be able to live with this and keep it safe, and keep the place open. That is our aim.”

Mr Andrews said they were men in their 70s and 80s who died some weeks ago. Both were linked to aged-care outbreaks.

Melbourne’s key 14-day average of new cases fell to 2.7 on Wednesday, while the city has had only three mystery cases in the past fortnight.

Outside Melbourne, Victoria has a 14-day average of zero and no mystery cases. There are also no longer any active COVID infections in regional areas.

Elsewhere, NSW had one more local case on Wednesday and seven in people in hotel quarantine. Queensland also had two infections in returned overseas travellers.

With shops, hospitality venues, beauty salons and other businesses reopening in Melbourne on Wednesday, 180,000 people have gone back to work.

“That is … an achievement that every single Victorian should be proud of,” Mr Andrews said.

“Many Melburnians want to get out and support local businesses and I want to remind everyone that the rules still apply and the rules are not against you, they are for you. They are so you can continue to do these things.”

The government is still working on a QR code system that customers can use to check into businesses. There had been speculation Victoria would adopt the ACT’s successful app, but Mr Andrews said it would not suit the state.

“I’m confident we will get a product that fits seamlessly into what I think is probably the best IT product anywhere in the country,” he said.

Elsewhere, an announcement is expected later on Wednesday on plans for some owners to be allowed to attend next week’s Spring Racing Carnival meetings, and for crowds at the Boxing Day Test. Mr Andrews said the Test was particularly important for Victoria.

“There are events that are a lot smaller, but as a sign of success that Victorians can be very proud, that will be one among many,” he said.

“We will have lots of events, large and small across the state. The theme will be twofold – it will be safe, and it will all be the result of a really strong partnership between our government and people who are running events who are absolutely and fundamentally committed to make sure they can occur in a COVID-safe way. And we’re very grateful for that.”

The state government is due to announce more easing of Melbourne’s virus measures on November 8.