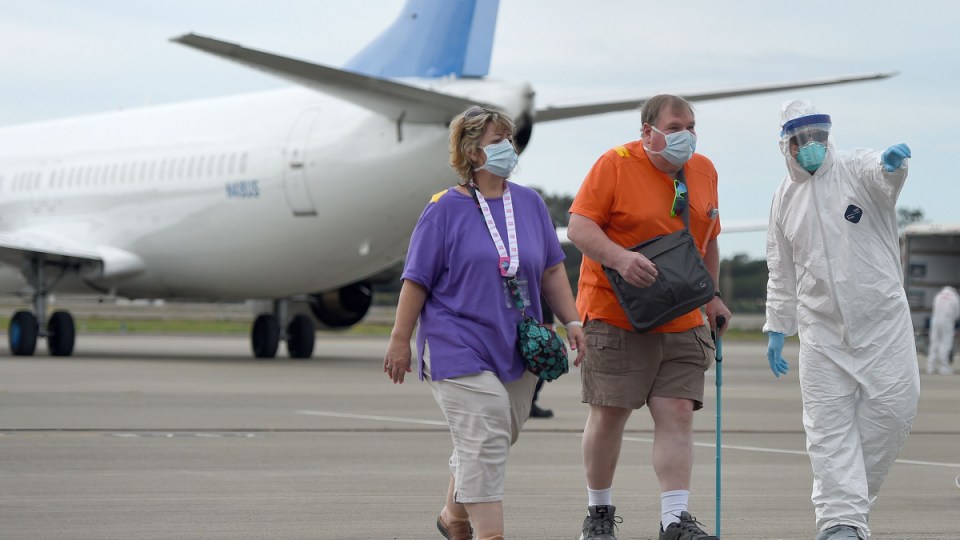 Travel is returning for people in many Australian states and territories. Photo: Getty

Australia is suddenly more open than it has been in months, with Victoria poised to take significant steps towards COVID-normal.

With only a handful of coronavirus cases nationwide on Tuesday, the push to reopen interstate borders is gaining renewed traction.

All states and territories – except Victoria – will be welcome in Tasmania without quarantine from November 6.

On Monday, the island state opened up to visitors from South Australia the Northern Territory, Queensland, the ACT, Western Australia and New Zealand.

As Victoria moved to finally ease restrictions in Melbourne on Tuesday, NSW Premier Gladys Berejiklian said she was watching her state’s southern neighbour.

“We’ll take the border down as soon as we can, but we do need to wait to see what impact easing of restrictions in Melbourne and Victoria has before we decide exactly when that will be,” Ms Berejiklian said.

“That’s the real test … it’s easy not to spread the virus when people have limited mobility.”

Victorian Premier Daniel Andrews was unsurprised by the NSW stance.

“I think we’re all gonna look very closely at how things go in the next few weeks,” he said on Tuesday.

Mr Andrews said the limit on travelling further than 25 kilometres from home would remain for Melburnians, as would the so-called “ring of steel” checkpoints that prevent travel between the city and regional Victoria without a permitted reason.

“We do hope to be able to lift those on the [November] 8th, and that will mean people can travel across Melbourne more broadly and travel into regional Victoria and vice versa,” Mr Andrews said.

He said travel to NSW would become more likely once Victorians were able to travel freely within their own state.

“I don’t see why we wouldn’t be able to be united with NSW to the extent that people felt the need to go there,” he said.

Mr Andrews said it was likely that regional Victorians would be invited interstate before Melburnians would be welcomed.

“I think it’s logical that it will be regional Victorians into NSW and SA first, before metro Melbourne,” he said.

Mr Andrews urged Victorians to spend “whatever they can” on holidays in regional parts of the state rather than interstate.

“As much as some of us might like to go and play golf in Tasmania, for instance, we won’t. We won’t be doing that this year,” he said.

Christmas in the Top End on the cards

The Northern Territory could soon welcome embattled Victorians, with Chief Minister Michael Gunner flagging the top end is “on track” to open its borders to Melburnians before Christmas.

“At this stage we’re on track for the national roadmap, which is that Victoria will join the rest of us around Christmas – apart from Western Australia, they’re taking their own path,” Mr Gunner said.

The announcement came with a warning though, as Mr Gunner cautioned Victorians not to get their hopes up just yet.

“I want to be a bit careful about giving people too much hope … but so far everything is on track,” he said.

Mr Gunner stipulated that the NT would also take a “watch and wait” approach, as restrictions eased and Victorians began to move more freely around the state in the lead-up to Christmas.

South Australia will require Victoria to meet an extended period of no mystery cases before relaxing its border, with no time frame in sight.

Police Commissioner Grant Stevens, who also heads up the state’s transition committee, says that may involve up to 28 days or two incubation cycles for the virus.

“The hard border will be the first thing that we lift and then free travel between Victoria and South Australia would be that next step.

“But as much as I would like to put a time frame on that, you simply can’t,” he said.

Ms Berejiklian blasted the sunshine state for playing “games” and said that NSW had clearly demonstrated its capacity to run a strong economy and keep the community safe.

“I just wish we’d take the games out of this because it’s affecting people’s lives … especially when the border closure is completely unnecessary,” she said.

Former Queensland premier Peter Beattie said it was time for the state to open its borders to the rest of Australia.

“Frankly if we don’t open up, then Australia’s going to go broke,” Mr Beattie told ABC News 24 on Tuesday.

Treasury has calculated the lockdown costs the economy $100 million and 1200 jobs a day, and Mr Morrison has pressured Mr Andrews to get Victorians back to work more quickly.

“We look forward to Victoria continuing to make progress on the path to reopening and joining the rest of the country at steps two and three in the national plan,” Mr Morrison said.

Stage 2 involves returning to work in offices where suitable, a relaxation of occupancy limits at venues and gatherings, and free movement between areas with no community transmission.

The next step covers a broader return to the workplace, looser density limits for events and large venues, open interstate borders and international travel partnerships.

Mr Morrison said he would continue to take advice – alongside the premiers of Victoria, NSW and South Australia – on removing hard border restrictions.