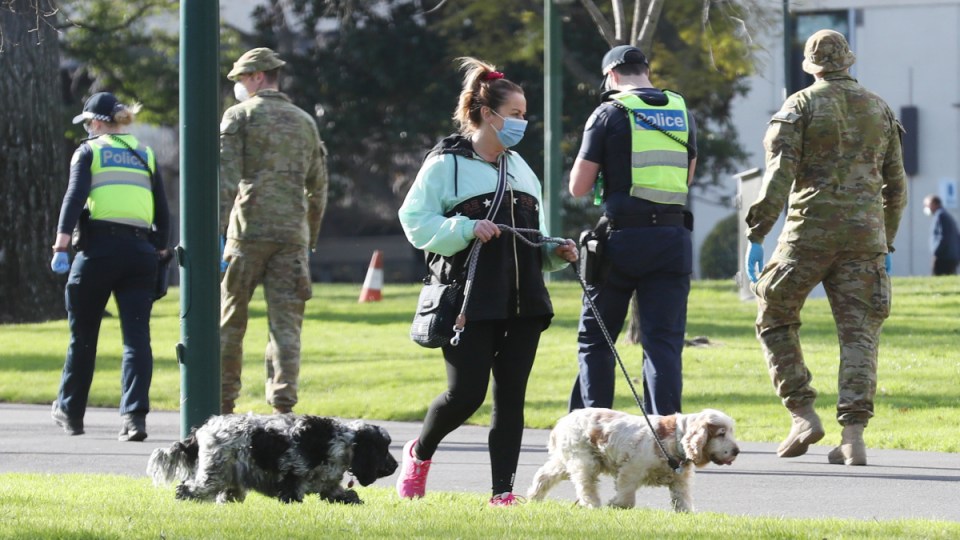 A man who broke curfew to get painkillers for a migraine and a woman found crying by a river are among hundreds of Victorians fined by police under the coronavirus lockdown.

And legal experts fear some people are being unfairly targeted.

It follows public concern over the use of drones and helicopters by Victoria Police last weekend to monitor illegal gatherings of people celebrating the AFL grand final.

The controversial decision was prompted by concerns that Richmond or Geelong footy fans would ignore crowd size restrictions and gather in the streets after the final siren on Saturday evening.

In a statement to The New Daily, Victoria Police said it was “happy with the behaviour of about 200 people who attended Swan Street (in Richmond) after the grand final”.

“They were in smaller groups and compliant with the CHO directions,” a spokesperson said.

“One person was arrested for being drunk and also fined for failing to wear a face covering.”

Victoria Police declined to comment on the use of drones.

On Sunday, 36 fines were handed down to Victorians breaking coronavirus rules, including six $200 fines for failing to wear a face mask, and nine fines at vehicle checkpoints.

But those penalties are only a tiny fraction of those dished out to locked-down Victorians.

In one incident reported to Melbourne’s Fitzroy Legal Service, a woman suffering from depression and anxiety went for a walk and sat by a river to cry.

While she was crying, a friend saw her and sat down to offer comfort – but police saw them sitting together and fined them.

In a separate incident, a Melbourne man with mental health issues was fined $1600 for riding a bike down High Street, Thomastown, outside curfew hours at 2.30am.

Another man was slapped with a $1600 fine for breaking curfew while getting pain killers for a migraine at a nearby service station.

Adrian Snodgrass, Fitzroy Legal Service’s night service principal lawyer, said many of the fines dished out for coronavirus breaches were “disproportionate” and hurt people who were already vulnerable.

“We’re seeing a lot of people who can’t explain themselves to police adequately because of language barriers, disability or age,” Mr Snodgrass said.

“They’re the sorts of people we’re seeing getting fined whether or not they’ve broken the law, or have done so in a fairly trivial way.”

Other legal experts have pointed to a worrying increase in the use of surveillance technology by police during the pandemic.

Lizzie O’Shea, the chair of Digital Rights Watch, said the lack of regulation around drones in particular was a major concern.

“The police might say, ‘We’re not planning to look into your backyard’, but that space is largely unregulated,” she said.

“It’s pretty troubling and it’s an invasion of privacy.”

Ms O’Shea said expanded police powers were unnecessary given the “vast majority of Victorians have been compliant”, as shown by a sharp decline in coronavirus cases.

“Police already have immense powers at their disposal,” she said.

“In these moments of crises, what tends to happen is our police powers are expanded and take a very long time to retreat – if they do at all.”

Victoria Police said it was unable to comment on individual incidents of potential coronavirus breaches.

“Anyone who has received an infringement notice from Victoria Police can apply for a review,” a spokesperson told The New Daily.

“Once submitted, Victoria Police has up to 90 days to complete the review.

“Once a review has been lodged, it goes through a robust review process and takes into consideration all evidence provided in support of the application.”